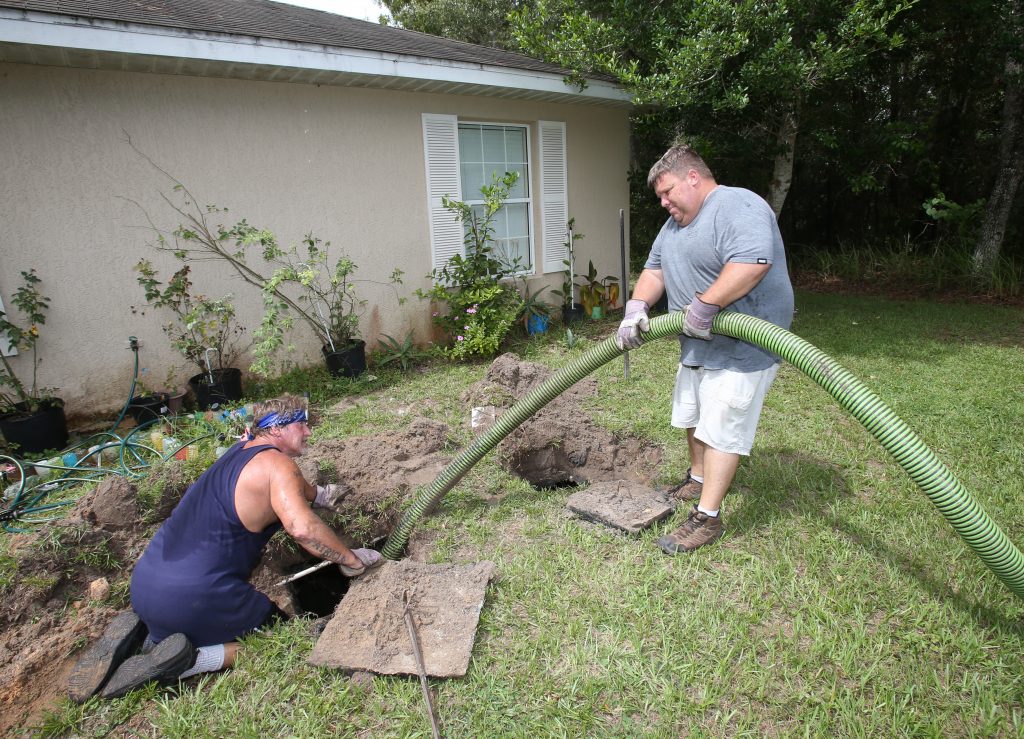 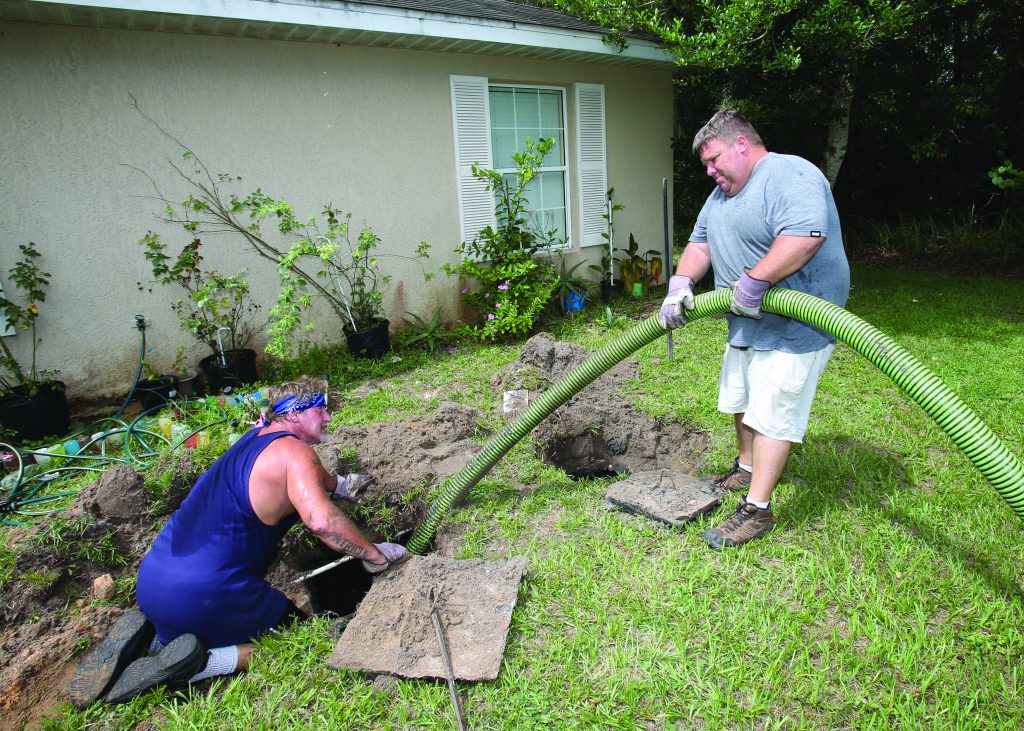 David Sherill, left, and Chad Ankney, both of Brown’s Septic Tank Services, pump out a septic tank at a home on Water Trak in Silver Springs Shores, Fla. on Wednesday, July 22, 2020. The home had a septic system that was backed up and nearly overflowed into the house.

Marion County is home to some of Florida’s most storied water sources, especially its major springs.

But buried beneath its surface, according to the Florida Department of Health, are tens of thousands of potential hazards to that water system — septic tanks.

While state officials generally consider septic tanks safe, they also are willing to help wean communities off those units as a method of protecting both ground and surface waters.

Marion County is developing a plan to do just that.

The county’s septic-to-sewer concept seeks in time to replace as many such systems as possible and connect them to either centralized water-and-sewer service, or to nearby neighborhood “package plant” wastewater processing systems.

The Florida Department of Environmental Protection helped launch this effort with a $500,000 grant to fund the county’s development of a master plan.

In the current state budget, which began July 1, the county got an additional $200,000 for this effort.

That was a small fraction of the $2 million the county sought, said Bob Titterington, utilities engineering manager for the county Utilities Department, who is overseeing the initiative. 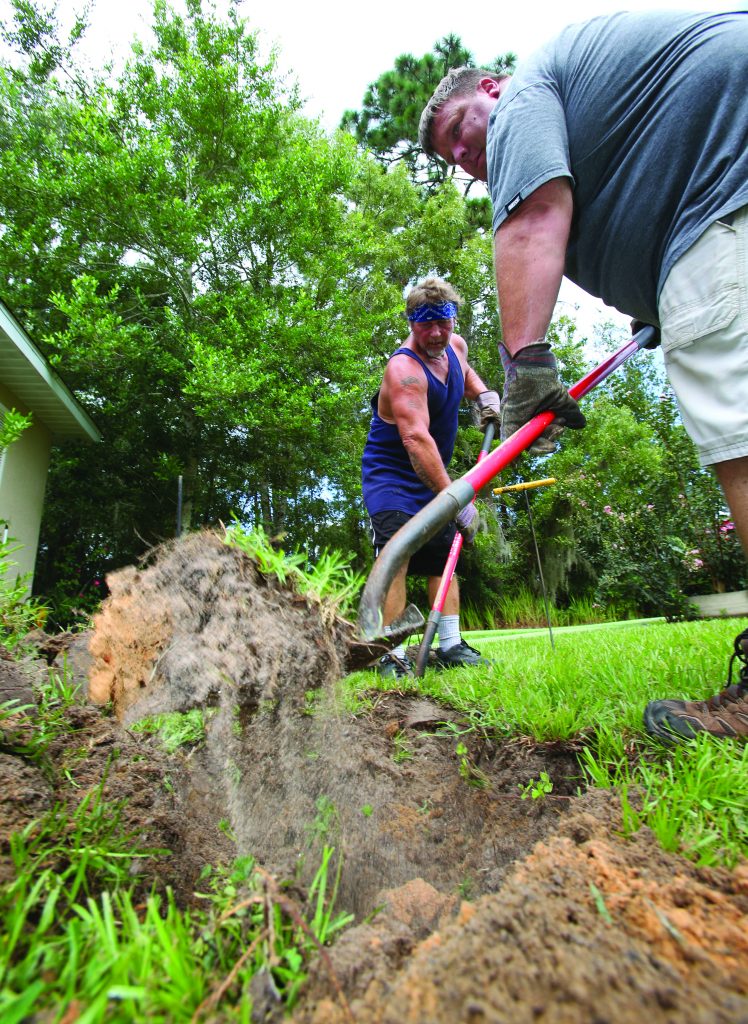 Chad Ankney, right, and David Sherill, both of Brown’s Septic Tank Services, dig up the lid on a septic tank as they prepare to pump it out at a home.

Still, staff will look for a way to use that fresh state funding to further this goal, he said.

“I think it’s a great idea, but the main thing is to stop sticking knives in the patient before you fix all the wounds,” Knight said.

“They need new septic tanks from going in before they take care of the existing ones.”

Yet, Knight added, replacing septic tanks with centralized water lines could help remove as much as 80 percent to 95 percent of the nitrogen from the groundwater, depending on where they go.

“That’s a much better alternative for the future,” he said.

County officials have long discussed the need to shift away from septic systems, where feasible.

But a new emphasis emerged from the Basin Management Action Plan, or BMAP, which was drafted to devise a strategy to better protect water sources within the basins of the Silver and Rainbow rivers. That was finalized in June 2018.

To illustrate the challenge, the BMAP pointed out that Silver Springs Shores has 3,000 lots that could be developed without hooking to a centralized water and sewer service. 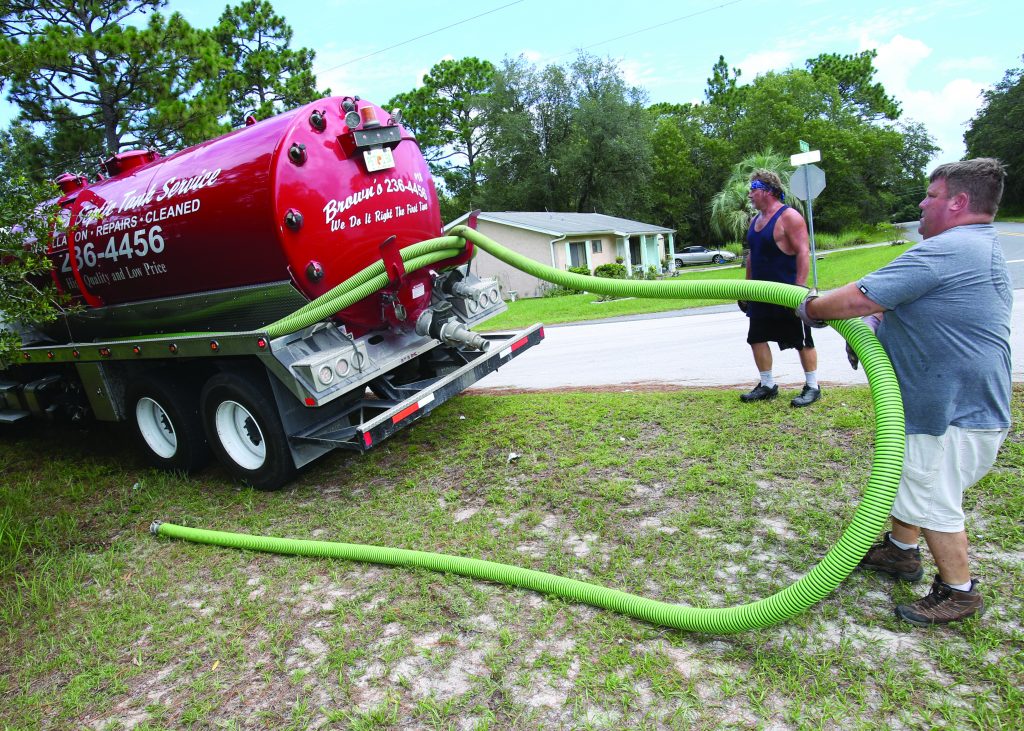 Overall, Marion County has 125,324 of the 2.8 million septic systems statewide, according to Department of Health from 2019. That’s the third-highest total in the state, trailing only Miami-Dade and Lee counties.

“Florida is home to more first- and second-magnitude springs than any other state in the nation. Healthy springs support diverse and unique ecosystems, and strengthen local economies. They also flow into rivers dependent on the spring’s clean, fresh water,” she said in an email.

Accordingly, she added, “In some areas, the water leaving onsite sewage treatment and disposal systems (OSTDS), including septic systems, has been identified as a major contributor to nitrogen pollution. Moving forward, DEP will continue addressing septic tanks as a source of nutrient pollution in Florida, and coordinate with local municipalities to enhance access and transition communities off septic systems to sewer systems.”

Titterington said developing a strategy to address that large population of individualized waste disposal systems depended feedback gathered during in-person meetings. Those meetings have been tabled until October at the earliest because of COVID-19, he said. Consequently, the preliminary report on the situation has been delayed until late January, or perhaps February.

“It would be wonderful” to get rid of all septic tanks, Titterington said, but that is likely not doable.

Many rural parts of Marion County are so spread out that it’s unlikely the county could bring a centralized sewer system to them.

For now, said Titterington, “We’re just trying to keep things moving and expand our system where we can.”

Knight said it’s not necessary to replace them on larger parcels. “Septic tanks are not really a problem on properties bigger than five acres because there is enough dilution. It’s when you concentrate septic tanks on anything less than three to five acres.”

“But,” he emphasized, “the first thing is to stop putting in new septic tanks.”