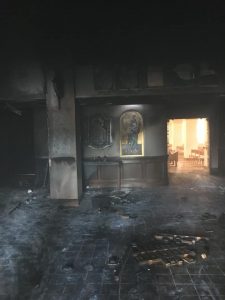 A Marion County man drove a van through the front door of Queen of Peace Catholic Church Saturday morning, then threw an incendiary device into the sanctuary where some parishioners were gathered.

No one in the church was injured, a spokesman for the Marion County Sheriff’s Office said.

After setting the fire, the driver of the van fled Queen of Peace, located at 6455 SW State Road 200, leading officers on a chase that ended on South Pine Avenue in Ocala, where he was apprehended.

The incident occurred around 7:30 a.m. while church members and staff were setting up for Mass. After the driver plowed through the doors, he jumped out of the van and threw some sort of device into the main part of the sanctuary, igniting the fire, the Sheriff’s Office reported.

Photos of the church’s interior show quite a bit of fire and smoke damage. Marion County Fire Rescue received the call of a fire at about 7:35 a.m. and reported having the blaze extinguished 12 minutes later.

Sheriff’s officials had not released the name of the suspect as of noon Saturday, because he was still being interviewed. They did say he was a Marion County resident.

The FBI, the Florida Department of Law enforcement and the State Fire Marshal’s Office are assisting the Sheriff’s Office with the investigation.

No one was available at the church for comment, but it did pose the following on its website:

“Due to the damage at Queen of Peace this morning, there will be no Extraordinary Form Mass this weekend. July 12th Mass in the Extraordinary Form will be at 6 p.m. (not the normally scheduled 4:30 p.m.). Please share this information to reach as many people as possible. Thank you!”