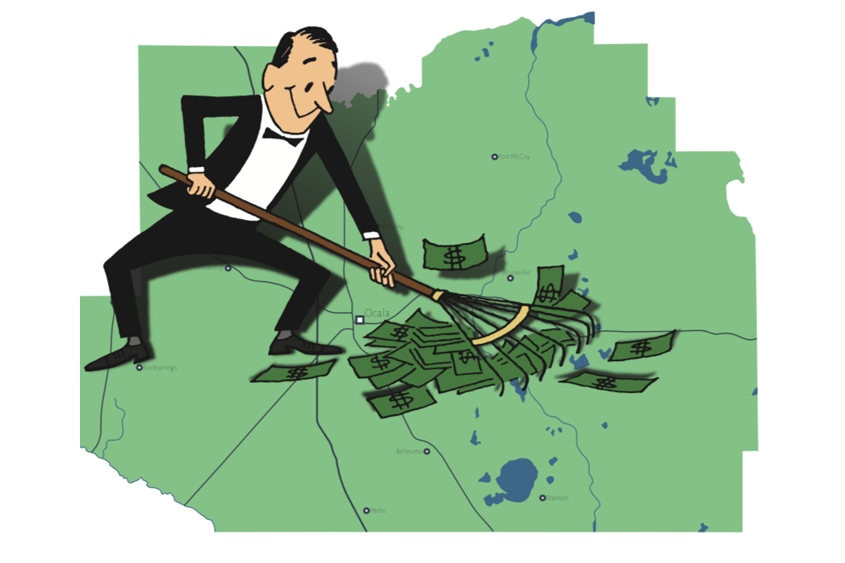 You hear the term Political Action Committees (PACs) brought up and discussed when conversations turn to politics and voting, especially when elections are near. But what are they, and what are some of the regulations around them? How do candidates feel about them? Why do people start them? How active were they in the previous local election?

Elections in Florida are controlled by the Division of Elections (DOE), which falls under the Florida Department of State. The DOE publishes and updates a committee handbook, which contains information pertaining to different aspects of committees such as financial deadlines and regulations on advertising and communication.

According to the handbook, a political committee is defined as: “A combination of two or more individuals, or a person other than an individual, that, in an aggregate amount in excess of $500 during a single calendar year.”

A person other than an individual translates to someone who chooses to create a PAC in the name of a candidate. Typically, the groups are labeled as “friends of (candidate name).”

While the majority of PACs deal with candidates or issues being voted on, there is also a less-utilized type of PAC that is focused on constitutional amendments.

The handbook also delineates what a political committee is not.

“A political committee is not an electioneering communications organization, an affiliated party committee, or a political party executive committee.”

While PACs may have political leanings and work closely with candidates for office as well as elected officials, they do not have any formal party affiliation. Groups with formal ties to a political party are known as party executive committees.

According to the Marion County Supervisor of Elections (SOE) website, there are two active PACs registered at the county level, Citizens Encouraging Progress, Inc., and the Committee to Improve Marion County, and three active Executive Committees (Republican, Democratic, Libertarian) locally.

“Our goal is to keep people out of the weeds, out of the ditch,” Wilcox stated.

Wilcox went on to state that he and his staff spent a good deal of time trying to work with both candidates and committees to ensure they had an understanding of the regulations and stayed within their boundaries.

With the reporting systems being automated, Cristi Cerra, a support services analyst for the SOE, said the deadlines for committee reporting are hard and exact, and committees can incur fines if they file a report even a few seconds after the deadline.

Doug Cone, president of Cone Distribution, helped create the Citizens Encouraging Progress, Inc., PAC (CEPI), which was focused on getting the penny sales tax implemented in Marion County. He said he saw a direct need in the county, and a PAC was one way to advocate for the causes.

“When it [the penny sales tax] was passed the first time, we believed the necessity was absolutely there for infrastructure, roads, etc., and for first responders and safety–two really hot topics. One of the things we did was put out the public opinion survey, and we reached all the way out to On Top of The World, it was really county-wide. And what did we see when we got the results back? Those were the number one and number two issues,” Cone said.

PACs can choose to support a political party, a certain candidate, or a certain issue. Cone said CEPI made sure to narrow its focus from the start.

”CEPI is issue-specific only. We are nonpartisan, no monies to candidates, etc., that’s in our charter because we take money from the city and the county. So, CEPI is specifically designed to take important issues that are going to have a benefit for all the residents of Marion County,” said Cone.

He went on to note that while CEPI concentrates on one area, how they support the cause is a collaborative process.

“I think when you can focus on specific issues, and you’re not a mile wide and an inch deep, you’re very, very targeted. And that’s what the CEPI PAC is designed to do with the governance of the PAC.   While I’m chairman, my input comes obviously from our team, Kevin Sheilley and company, and from my executive board. And then, if we make a decision, that goes to our full board for approval, so we’ve got great checks and balances,” said Cone.

It’s that collaboration, Cone said, that is key.

CEPI has shown virtually no activity outside of administrative expenditures since February of this year when it spent $5,000 on a survey for Horse Farms Forever, and Cone says he doesn’t see any issues on the immediate horizon that CEPI will get involved with.

The DOE Committee Handbook does stipulate when committees must consider disbanding, including “limited activity,” which they define as “the committee’s aggregate reported financial activity in each of two consecutive calendar years is $500 or less.”

But Cerra said that while those stipulations do exist, it is possible for PACs to remain together if they continue to file the required fees and maintain good standing.

A politician’s view of PACs

Joe Harding represents District 22 in the Florida House of Representatives. He was first elected in 2020 and said he’s felt how PACs can influence a race.

“I know from firsthand experience. I got hit with PAC attacks when I was running. And so, I mean, I’ve seen it and lived it. And it’s not, it’s not fun,” Harding said.

“Because you will see things printed about yourself, or put on a TV ad, in an email, or a text blast that is, frankly, just disgusting or wrong. And then you’ve got to decide, as the candidate, are you going to spend money to come back?” he said further.

Harding said it’s frustrating to have to deal with PAC attacks when running a campaign, especially when the information being put out hasn’t been vetted, and may not always be fully truthful.

“There is a negative side to PACs and an ugly side of politics in general. You get attacked by a PAC and you can’t figure out where the money came from, and you feel like you got blindsided. And that is, frankly, it’s probably the part that when you run for office that, that you have the most anxiety over…a PAC can attack someone without necessarily anyone […] ever really taking responsibility for it,” he relayed.

Politicians have the ability to pass regulations that affect PACs and how they operate, including limits on donations size and timing as well as improving transparency, but Harding says a one-size-fits-all approach to regulation might be difficult.

“I am very supportive of looking at limits for PACs that are supporting constitutional amendments, but I think it’s tough to set limits on PACs as a whole.”

One area Harding isn’t fond of is what he called “PAC stacking,” or the ability PACs have to funnel money almost freely amongst themselves. He said these kinds of actions can take money given for one cause and move it to another.

“In some cases, you’ll see well-intended folks may give to a PAC because they support a specific cause that the PAC was raising money for. And then that PAC gives to another PAC, who gives to another PAC, and four or five transfers later, […] money is being used for something that I don’t know the initial contributor supported. That is […] is the absolute brutal part about it,” Harding described.

While he has his hesitations about the role PACs play in the political process, he said he’s started one of his own and detailed his reasoning for getting involved with what he termed a “necessary evil in politics.”

“So, for me, my only reason for ever opening a PAC was the ability to be able to fundraise and raise dollars for and be able to support like-minded conservative candidates. And so, for me, I mean, I’m conservative, I believe in conservative-principle issues.”

A flyer for a recent campaign event Harding held spelled out different donation levels and included directions to anyone wanting to give over $1,000. The flyer instructed anyone wishing to donate over $1,000 to make checks payable to his PAC.

Harding said, “I think it’s important to include it because folks […] may not know the process. I mean, many people don’t know that there’s a cap…so we try to do that to at least make people aware that there is a cap, and if you are giving above that, there’s an option.”

Of all the candidates in the most recent city election, Ocala Mayor Kent Guinn was the only candidate to accept money from PACs, according to the Marion County SOE website. On Sept. 2, 2021, the Florida Thoroughbred Political Action Committee wrote a check for $1,000, and on Sept. 15, 2021, Liberty for Florida wrote Guinn a check for $1000.

Of the candidates filed to run in the upcoming 2022 general election, Marion County Commissioner Kathy Bryant, who is running for re-election in District 2, received a $1000 check from the Florida Thoroughbred Political Action Committee on Nov. 17, 2021.

In August, a political committee not officially tied to any candidate, but responsible for several negative flyers targeting candidates running for Ocala offices, received almost $35,000 from local companies and individuals, according to state records.

Brigitte Smith, chair of the Marion County Republican Executive Committee (REC), detailed in an email response what the REC’s focus was when it came to allocating donations made to the group both internally as well as externally.

“The REC uses the funding it raises to support the efforts of the Republican Party and its values, including community outreach and measures of republican campaigns from a local and state initiative…all expenditures promote the operations of REC, republican philosophies, and candidates within our community and state. Our focus for 2022 is raising additional funds to be able to lease a Victory Center.”

Regarding executive committee funds on hand, according to figures taken from the Marion County Supervisor of Elections, through Dec. 31, 2021, the Republican Executive Committee has taken $709,486.59 in monetary contributions since its inception while listing $672,556.63 total expenditures and distributions, leaving it with $36,929.96 remaining on hand.

The Democratic Executive Committee has taken $556,011.03 in monetary contributions since its inception while listing $546,491.75 total expenditures and distributions, leaving it with $9,519.28 remaining on hand.

The Marion County Florida Libertarian Party has taken in $919.42 in monetary contributions since its inception while listing $847.40 total expenditures and distributions, leaving it with $72.02 remaining on hand.

As for the county-level PACs, CEPI has taken $161,016.00 in monetary contributions since its inception while listing $160,977.19 total expenditures and distributions, leaving it with $18.81 remaining on hand.

The Committee to Improve Marion County has taken $34,400.00 in monetary contributions since its inception while listing $26,600.78 total expenditures and distributions, leaving it with $7,799.22 remaining on hand.