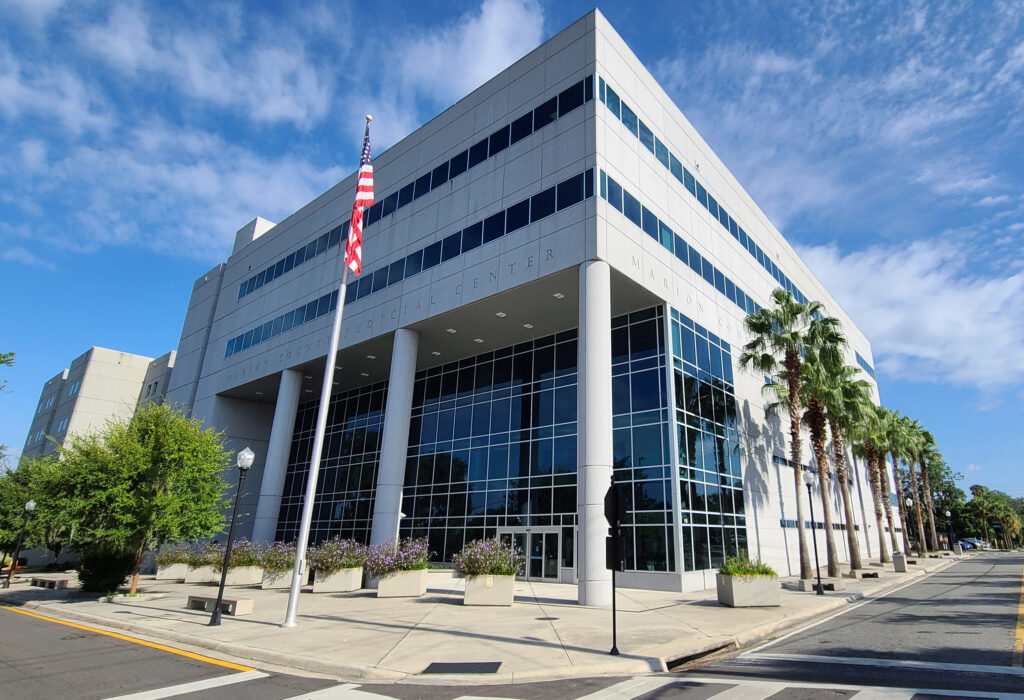 The Marion County Courthouse is shown in this file photo. On Tuesday, the Marion County Commission approved a plan to buildout the empty fourth floor of the building for use as offices and a courtroom. [Bruce Ackerman/Ocala Gazette]

A recent order from the chief judge for the 5th Judicial Circuit suspended jury trials and grand jury proceedings in the circuit until Jan. 18.

But when pressed by attorneys during a video conference this week, Chief Judge Daniel Merritt said the prospects of jury trials restarting any time soon were difficult to predict.

“What I have been doing on my criminal felony docket, for instance, like this week, I am setting late February pretrials, late march pretrials and the following week a trial in April. Not necessarily believing that I may be able to do those jury trials but hoping that things will get better,” Merritt said.

He said while trials may not move forward as scheduled, setting trial dates helps to clear cases.

“The simple specter of the jury trial, of course, begins to make the litigants and criminal defendants begin to more realistically assess their situation with the possibility of trial on the horizon. And on my criminal docket, it is making a reasonable number of cases settle.”

Marion County has not held any trials since December due to the high COVID-19 positivity rate. The seven-day average positivity rate should be under 10 or 11% before trials can begin, according to previous orders from Florida Supreme Court Chief Justice Charles Canady.

In Marion County, the positivity rate was 17.7% for the week ending Jan. 2. It was the highest positivity rate for any of the five counties in the circuit. Positivity rates for Citrus County stood at 14.1%, Lake County 15.4%, Sumter County 15.3% and Hernando County 14.4%.

Since the beginning of December, Marion County has tried to summon jurors and hold trials only to have to cancel them last minute due to local high COVID-19 numbers continuing a months-long disruption of jury trials due to COVID-19 since March.

Judge Edward Scott and Merritt met with local attorneys and judges to discuss the situation.

Of paramount concern during the meeting was the backlog of cases growing larger every day, and the safety of those participating in the process.

Although Sheriff Woods reported no inmates tested positive for COVID-19 in December, Judge Scott indicated that for the most part inmates would continue to be restricted from coming to the courthouse “for the obvious reasons,” with the only exceptions being those cases where the inmate had entered a plea.

He also gave an update on readying a courtroom located at the jail with the right technology so that it could be better equipped to hold hearings.

Leonard Klatt, an Ocala attorney, asked if there was plan for reducing the Marion County jail population through bond reduction or other means. Judge Merritt said attorneys can still seek bond reduction for inmates. Those hearings can continue even while trials are suspended.