It isn’t only make believe! 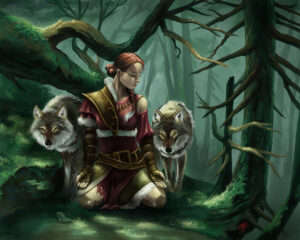 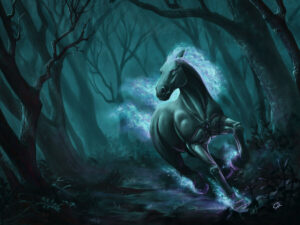 You could say that artist Christopher Hershberger lives the dream. Or, actually, many dreams. He occupies countless worlds in his imagination, usually from the perspective of a high fantasy aficionado, and makes a living doing what he loves most: making make believe.

Games aren’t Hershberger’s only game. The Ocala-based artist won “Best in Show” last week in a juried competition at NOMA Gallery. The work involves several processes combined with Photoshop alterations, a technique known as “photobash,” and features a female figure swathed in swirls of irridescence. The piece incorporates an acrylic pour and oils on canvas with an epoxy coat.

“I will very frequently start with something physical, take it to something digital, output it again into something else and then do other additional physical things to it,” he said.

Hershberger, 36, grew up in Alaska and across the United States. His grandparents, parents and aunts and uncles created art of one form or another. His mom would sew and draw pictures with silverpoint; his father was a photojournalist. They used to read chapters from The Hobbit to him and his brothers at bedtime. From a young age, Hershberger’s imagination took off and soared into new, uncharted realms.

When asked at what age he started to draw, the artist jokes that he illustrated on the wall as a baby using his bottle as a paintbrush.

The multifaceted artist earned a bachelor’s degree in computer animation from Full Sail University. Initially, he wanted to work on animated and fantasy movies, inspired from a young age by TV cartoons such as The Thundercats and Teenage Ninja Mutant Turtles, and films The Dark Crystal and Labyrinth. 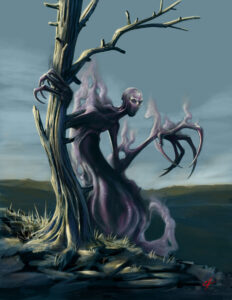 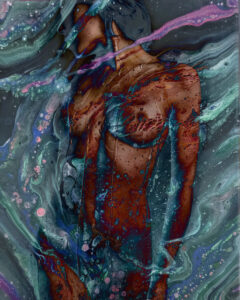 “For me, make believe,was something that you could do as a career,” Hershberger said.”Writers, movie people, artists — they all get to immerse themselves in the things that they enjoy, whether they’re things that actually exist or not.”

While at Full Sail, Hershberger found common ground with Eric Askue, a Connecticut-based artist and professor who’s also a fantasy enthusiast. They and other friends began to collaborate to create miniatures and terrains for tabletop games. Their projects have included collaborators Doug Bowman and Sebastian Duran.

“We generally work in 28-millimeter scale, kind of like your standard little Dungeons and Dragons figures or War Hammer,” he explained.

A Kickstarter campaign typically funds the team’s works. “Worlds Over Run: Beasts of Burden,” a collaboration from 2020, highlights uniquely detailed and varied dinosaurs. The pieces sold like hotcakes because gamers could only find cheap rubber dinosaurs for their tabletop games.

“People I had talked to were very unhappy or dissatisfied with what was on the market,“ he said.

Hershberger and Askue’s current project, “Necromancer’s Tower” will be featured on Kickstarter soon, around the end of the month, delayed by the untimely death of friend and collaborator James McCann.

His ghostlike demon “Kayetan” is a creature he illustrated for Parris Sheets’ latest young adult novel in her Essence of Ohr series, which just went live online this week. One of his personal favorites, “Arlinn’s Meditation” reimagines a Magic the Gathering character in springtime, befriended by wolves.

Hershberger pays the bills with a variety of commissioned art works, everything from portraits to book covers and painting over playing cards for Magic and Flesh and Blood games. The cards, known in the gaming world as “alters,” can be used for playing or displayed in shadowboxes, depending on the degree the artist has actually altered the card.

He explained for non-gamers that artists will paint on cards that are slightly damaged and need lines or shading filled in. One Magic the Gathering artist autographed a card she originally illustrated, which Hershberger altered. She said she was impressed because his additions were imperceptible.

Working under the company name Dwarven Palette, Hershberger finds work through word of mouth, online and at game conferences. He doesn’t have an official artist statement, but his love of storytelling is the golden thread running through all of his works.

“Artwork should tell a story,” he said, “and that’s what I strive to do. I try to capture a moment in time.”