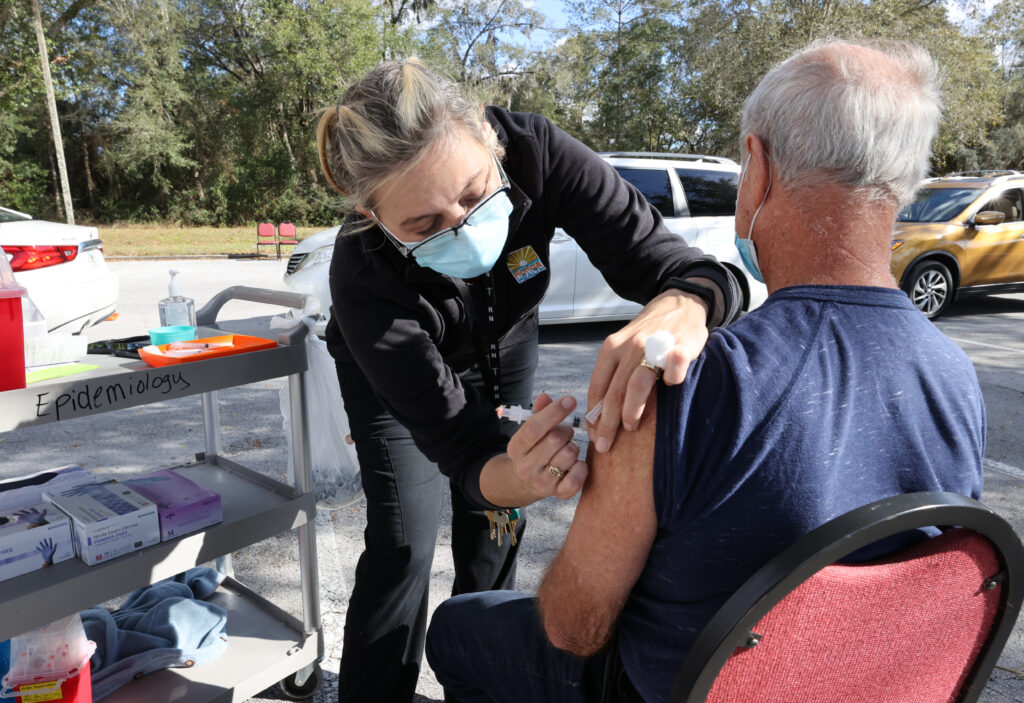 Marion County has multiple sites ready to vaccinate those 65 and older against COVID-19 and more on the way. The problem is vaccines are coming in at a trickle.

The Heart of Florida Health Center held a vaccine event recently and is ready to do more. Marion County Publix supermarkets, through a pilot program with the state, also started offering vaccines. And the local health department is working with AdventHealth Ocala and local fire and emergency management in hopes of opening a vaccination center at the Paddock Mall. Trinity Clinic is partnering with the Reilly Arts Center with plans to open a vaccine site that is completely operated by volunteers.

But the flow of vaccines has not caught up with those ready to vaccinate.

In the three weeks since vaccinations started in Marion County, 10,034 have been dispensed. First came healthcare workers, and for the last week, those 65 and older.

But those first doses went fast.

The Florida Department of Health in Marion County, which gets the bulk of the vaccines, suspended registration for people 65 and up after receiving more than 50,000 registrations for about 13,000 doses. They will reopen registration once the majority of the first 50,000 are vaccinated. That could take until March as they hope to ramp up to 1,000 vaccinations per day.

“We continue to work with the Governor DeSantis’s office to secure additional doses,” Publix spokesperson Maria Brous wrote in an email to the Tampa Bay Times. “We anticipate receiving additional supply next week.”

“We’re going to end up in, I think, a holding pattern until the state releases more vaccines to (Marion County),” said Dr. David Kuhn, who is behind the Trinity Clinic vaccination site at Reilly.

The Heart of Florida gets its own allotment as a federally qualified healthcare center and they are waiting too.

“We’re waiting for a second allotment. We had to pause scheduling people once (our first allotment) ran out,” said Ulmer, who said they initially received 2,100 vaccines that went mostly to healthcare workers.

The DOH gave them almost 1,700 doses recently, and they vaccinated 1,100 people on Saturday, Jan. 9. Most of the rest went on Monday.

“This is going to be a tough hill to climb. Without the activation of the National Guard to set up a vaccine distribution site, we’ll be at this until March,” he said.

Heart of Florida will also be immunizing 200 people per day from the DOH’s registration backlog starting on Thursday.

Florida has received over 1.6 million doses but only 633,440 people have received their first shot in the state, according to information from the Centers for Disease Control and Prevention.

For clinics like Kuhn’s, it could set their plans back. They hoped to offer at least 300 vaccines per day by the first week and build up to 600 per day after two weeks.

“If we don’t get any vaccines next week at our site, then it’ll be a pushback. So, it’ll be a two-week run at 300 a day, and we want to start as soon as we can, but we just don’t know exactly when we can start because we don’t know when exactly we’re going to get vaccine.”

While Kuhn plans on getting doses from the local health department, he will try to get them directly from the state. There’s no way to order from the manufacturer.

“There’s a lot of people who really want to get vaccinated desperately,” Kuhn said. “The rollout of vaccine, the availability of vaccines hasn’t been at the quantity that we hoped for.

“I wish there were more, and they just don’t have enough at this point. The demand is so high right now for vaccines, there’s just not near enough supply to me the demand, not just in our state, but nationwide.”

According to Mark Lander, administrator for the DOH in Marion County, each county is given its allocation for the following week by Thursday or Friday, but there isn’t a set allocation for each county. Allocations depend on how many vaccines the state gets from the federal government.

Ulmer said many don’t realize the work it takes to give the vaccine.

“It’s very labor-intensive,” Ulmer said. “It took us about 75 people to do 1,100 in six hours, and so you’ve got to have a good team to rotate people to eat, to rest, to use the restroom in order to keep that big beast operating.”