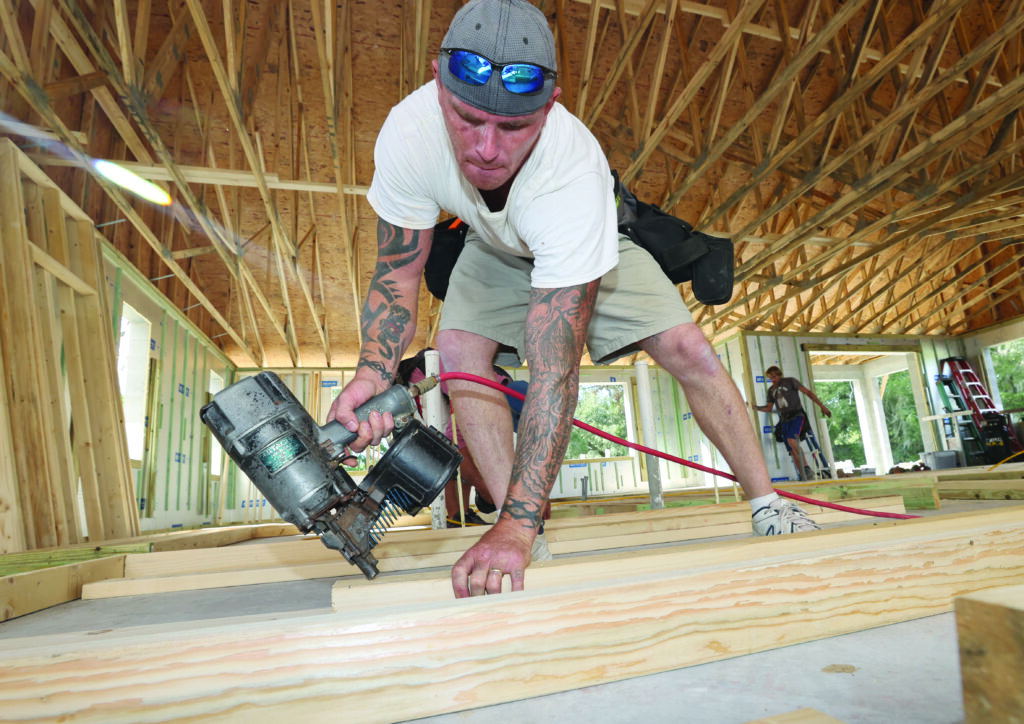 Homes being built at fastest rate since before recession, officials say

On Top of The World developer Ken Colen is already turning dirt on Calesa Township, likely the most ambitious housing project on the drawing board in Marion County, projected to add 5,000 new homes to the already bustling State Road 200 corridor in coming months.

But against the backdrop of Calesa, Marion County is already experiencing a boom in the single-family housing market—one not seen since before the Great Recession.

The biggest influences, they say, range from cheap money to COVID-19 fatigue to efforts by local officials and business leaders to shore up the county’s economic underpinning to builders hitting the market’s sweet spot.

Yet observers also point out that as quickly as homes are going up, Marion County’s inventory still lags where it should be.

Construction data compiled by county Property Appraiser Villie Smith provide evidence for a boom. Smith reports annually on the total number of all types of structures found throughout the county as of each Jan. 1.

Marion County, including its cities, added 2,835 new single-family residences in 2019, according to those reports. That is the most in a single year since the 4,081 built in 2007.

Meanwhile, between Jan. 1, 2020, and Sept. 30, according to public records, the county’s Building Safety Department issued 2,518 permits for new single-family homes in the unincorporated part of the county. That projects to 3,357 for the year.

The county’s roaring home-building industry is attempting to catch up to its population growth.

Over the past decade, Marion County’s population grew by 11.1 percent, while its inventory of single-family homes increased by 9.2 percent.

And other types of housing—apartments, duplexes, condos and mobile homes—are not compensating for the shortfall.

In fact, that stock has shrunk.

At the end of 2009, the Property Appraiser’s Office reported that Marion County had 40,637 dwelling units other than single-family homes.

County Growth Services Director Sam Martsolf does not believe the housing boom is driven by the speculation of Wall Street bankers that overheated the local market before the last crash.

One moving company thinks so.

In January, U-Haul reported that Ocala ranked third on its list of hottest “growth” cities for 2019, trailing only the Raleigh-Durham area in North Carolina and Kissimmee. The truck-rental firm bases that on the number of net one-way migrations from state to state.

The trend for 2020 is unclear so far. Jeff Lockridge, a U-Haul spokesman, said the report for this year would be finalized and released in about six weeks.

Still, Kevin Sheilley, president and CEO of the Ocala/Marion County Chamber and Economic Partnership, thinks the community remains a magnet. He attributed the hot housing market to population growth, a strong economy and a lack of supply.

“As I understand it, the (pre-recession) boom was really built on speculation. The local economy is much stronger today than 15 years ago and significantly more diverse,” Sheilley said. “Rooftops drove the local economy then, but today it is just a piece of a much larger puzzle. Construction jobs are important, and we need to keep building homes if we want to continue to attract new companies and residents.” 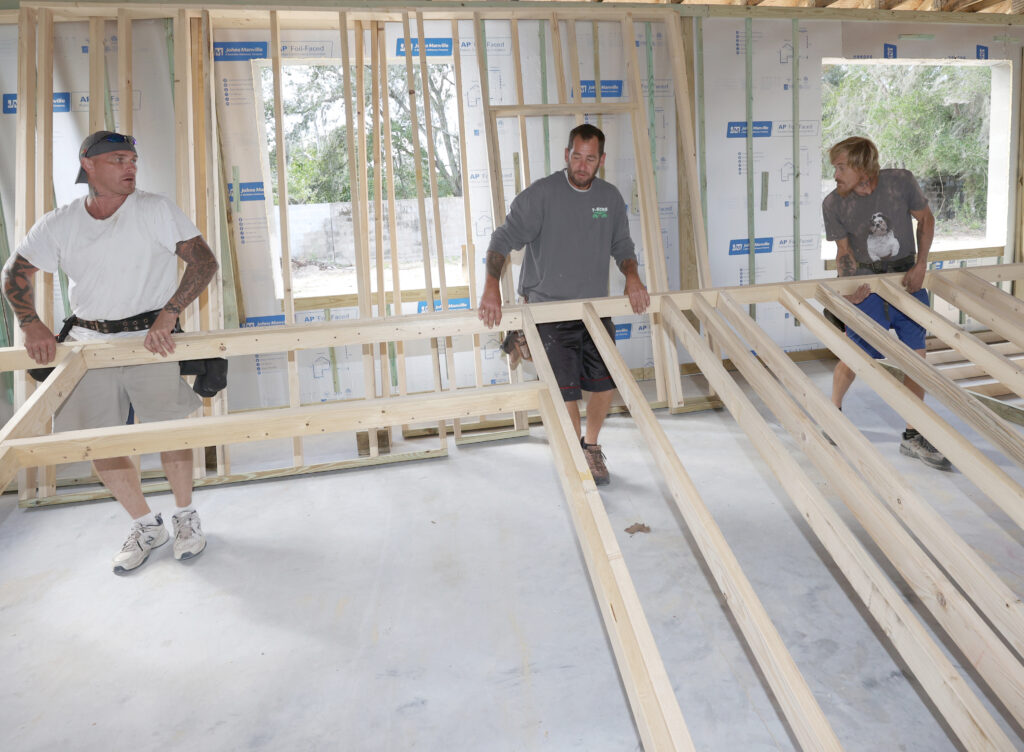 Sheilley said the depth of the valley between the building peaks was surprising. He noted that Marion County still needs as many as 2,600 new homes a year to keep up with population growth.

“We stopped meaningful building for almost a decade and ended up with a supply issue. Part of today’s growth is to catch up on the houses we did not build during that period. The population kept growing, the economy recovered, but homebuilding was slow to respond,” Sheilley said.

“This would only be anecdotal,” he added, “but when I speak with area builders, they relay that homes are sold almost as soon as they pour the slab and they are being purchased by end-users not speculators. I certainly understand the trepidation and concern from those who lived through the housing bust, but if we have survived and thrived through COVID, then I think we should expect more years of similar housing growth.”

Stan McClain, executive director of the Marion County Building Industry Association, and himself a builder, credited cheap credit for the building boost.

“I think low interest rates are the biggest driver right now,” he said.

McClain thinks one reason rates have dropped is the Federal Reserve’s efforts to support banks through the pandemic. That has left bankers flush with cash to lend.

Before the 2007 recession, the annual average rate for a 30-year fixed mortgage, the most common home-purchasing loan, was just above 6 percent, according to Freddie Mac, the congressionally chartered mortgage provider. In 2012, after the housing industry cratered, that annual rate sunk to an average of 3.66 percent, the recent low point. The rate had rebounded to an average of 3.94 for 2019.

But, in October, Freddie Mac reported the 30-year fixed rate was 2.83 percent.

McClain, now a state representative, said the heightened building activity also reflects the industry’s effort to catch up, partly because some builders bailed on the profession during the recession and never returned.

McClain, who served as a county commissioner at the worst of the Great Recession, agreed “100 percent” with Sheilley that efforts to diversify the community’s economic base have paid off. That’s especially so during the pandemic, as local branches of distribution giants FedEx, Amazon and Chewy have taken root and thrived during the COVID crisis.

Accordingly, McClain also believes the housing market is more durable now than it was nearly a generation ago.

“We’ve never recovered fully with the number of homes that we need to meet demand,” he said. But, “It’s like it was before the recession: It’s strong. Nobody is building spec homes. There’s no real new housing that’s for sale because they’re being sold before they’re finished.”

Ironically, a key factor in that, according to Pittas, is the CEP’s work to make the local economy less reliant on construction, particularly of new homes.

“We’re not so tied in with all of our jobs being in construction anymore. They can’t fill those jobs fast enough, and they don’t have enough of the tradesmen even, and that’s really slowing things down,” said Pittas. “But I think the most important change is that diversity, and where our jobs are in the county. That’s had a huge impact.”

But the nature of the market itself has also changed, he noted.

“Prior to the bust in ’08, a lot of those homes were being built on speculation. And those prices skyrocketed. You could contract to build a home and by the time it was finished, it was up 20 percent,” he said. “What we’re seeing now is they’re going to end users, people that are actually moving into these homes. So, it’s filling a need that we have in our community right now, especially with the new distribution centers and the jobs that are coming there.”

Pittas noted that builders of all stripes, from behemoths like Pulte to those that can only build a couple of homes at a time, are profiting from a lack of ambition—in other words, by not going too big or too extravagant.

“Those are the ones that, as soon as they’re on the market, they’re sold,” Pittas said. “Once you get into the higher, luxury end, the demand isn’t as great. It seems to be that one price point they’re in that they can’t build them fast enough. And that’s probably the driving force for it. They’re literally closing (the sale) the day they get the occupancy permit.”