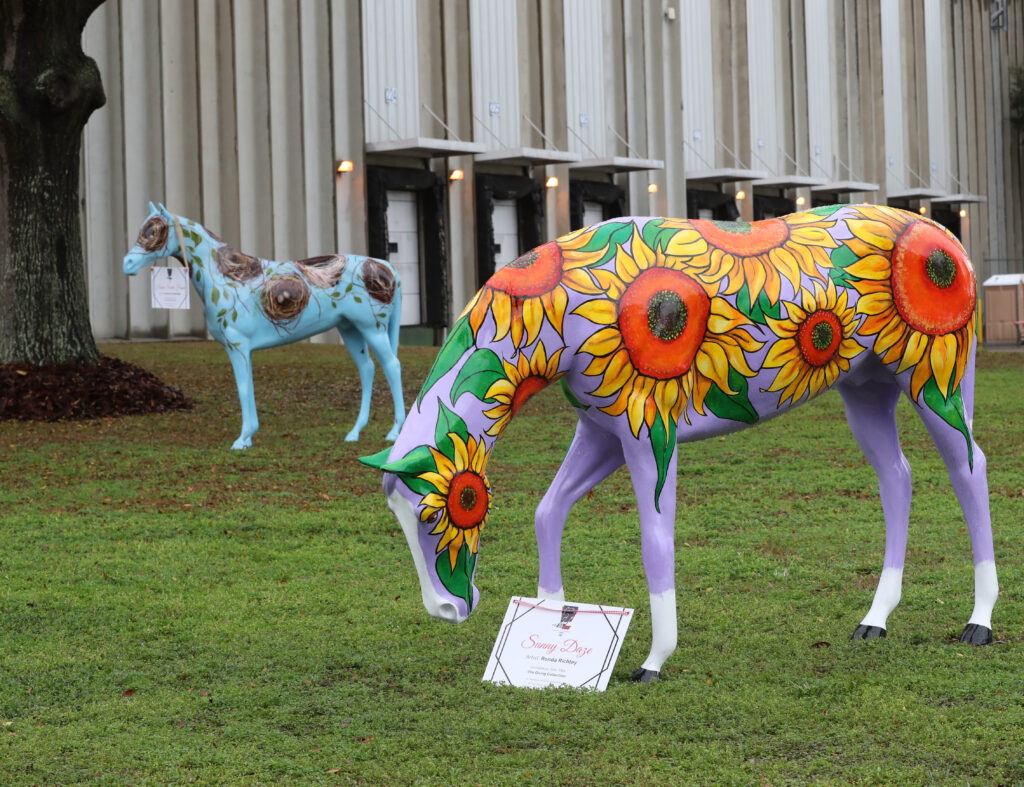 At long last, the 15 painted equine statues of the Horse Fever 20/20 herd went on public display on Saturday.

The Family Day event got going after morning rains ceased and sunlight broke through. After the break in the weather, visitors entered the gates of the official “stable,” the Transformco warehouse facility in southwest Ocala.

The herd was spaced out all around a massive parking lot, providing plenty of room for social distancing. Many of the artists were by their creations, offering insight into their visions and processes.

The first Horse Fever public art project was launched in 2000, with Paula King and Laurie Zink as chairwomen. The project was the seed of formation for the Marion Cultural Alliance (MCA), which has since provided hundreds of thousands of dollars in grants to area artists and arts organizations. There also was the Horse Fever in Motion herd in 2005 and Horse Fever II herd in 2011. Zink and Jo Layman were cochairs for Horse Fever 20/20.

“All of the horses are standing so proudly,” said Jaye Baillie, executive director of MCA, sweeping her arm across the scene. “This our fourth herd and everybody loves these painted horses, and every one of these horses has a story. And what’s fun about this herd, even though 12 of these horses were sold to sponsors, we have three, called the Giving Collection, that are available to a lucky winner through a raffle. Tickets are $100 and we’ll have the drawing on June 4 at the Brick City Center for the Arts, which is also where people can stop in buy a ticket, and we’ll also have them online starting next week.”

The Giving Collection horses — “Home Sweet Home,” by Carlynne Hershberger; “Sunny Daze,” by Ronda Richley; and “Critters,” by Bonnie Eads —are dedicated to the memory of Richard “Dick” Hancock, the longtime executive director of the Florida Thoroughbred Breeders’ and Owners’ Association, and one of the earliest supporters of the Horse Fever endeavors. He died Jan. 20 in Ocala.

“It’s super sentimental and it definitely means a lot to the whole family,” said his daughter Ellie Hancock during Saturday’s event. “When he first heard about the idea of Horse Fever, he really was all in, just like all the other projects he was part of. Bringing the equine community and the arts community together was really a big deal for him, and being able to work with Jaye and Paula and Laurie just made it that much better.”

Another of the equines was tugging at the heartstrings of viewers as well. “Legacy” was painted by Derek Grimsley in memory of former Ocala Police Chief Greg Graham, who died in a small plane crash in late October. The horse is covered with images of things important to Graham, such as the OPD shield, allusions to family and to water skiing, scuba diving and his beloved aircraft, complete with the tail number.

“His widow, Amy, provided me with a lot of photographs, which I can’t imagine was easy for her, given how recent it was, but she was very strong and we collaborated to make what I do visually and artistically honor him and to hone in on who he was as a person,” Grimsley said. “She wanted to make sure it wasn’t just focused on who he was as the chief of police, but that he loved his family and extreme sports.”

Jeremy Collins, of Beverly Hills, attended the event with his youngsters Carson and Kinsley.

“We came because our friend Dr. Farrar painted that horse, she is an animal doctor herself,” Collins said, pointing to “Celestial Magic,” painted by Michell Farrar in memory of her longtime paint horse companion, Magic.

Carson said his favorite horse was “Lurking at the Surface,” painted by Christopher Hershberger, which shows the upper body of a huge alligator half submerged in cool blue water.

Kinsley voted for “the award one,” meaning “Winners Circle of Life,” painted by Esta Mann, which is adorned with colorful racing ribbons.

“And what was underneath it?,” asked her father, leading Kinsley to offer, “I have a dream,” which is indeed painted on the horse’s belly. A mirror had been placed on the ground under the horse so visitors could easily see the words without having to bend over.

On Monday, the Giving Collection trio and “Legacy” move to the Brick City Center for the Arts in downtown Ocala for a few days. The entire herd will be on display through the month of March at the On Top of the World Circle Square Cultural Center.