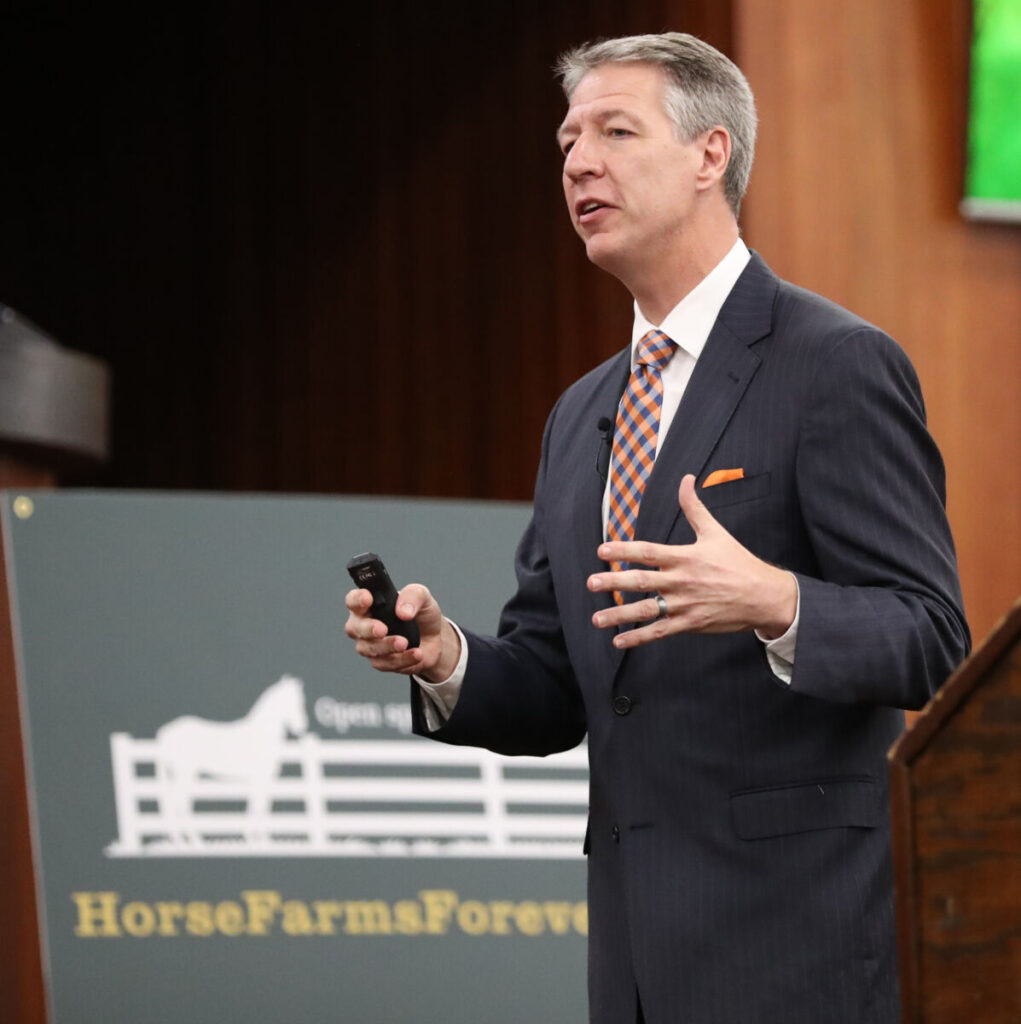 Kevin Sheilley, the president and CEO of the Ocala Metro Chamber and Economic Partnership, speaks during the Conversations About Conservation Horse Farms Forever Conservation Summit at the Ocala Breeders’ Sales Company in Ocala, Fla. on Tuesday, Nov. 23, 2021. [Bruce Ackerman/Ocala Gazette] 2021. 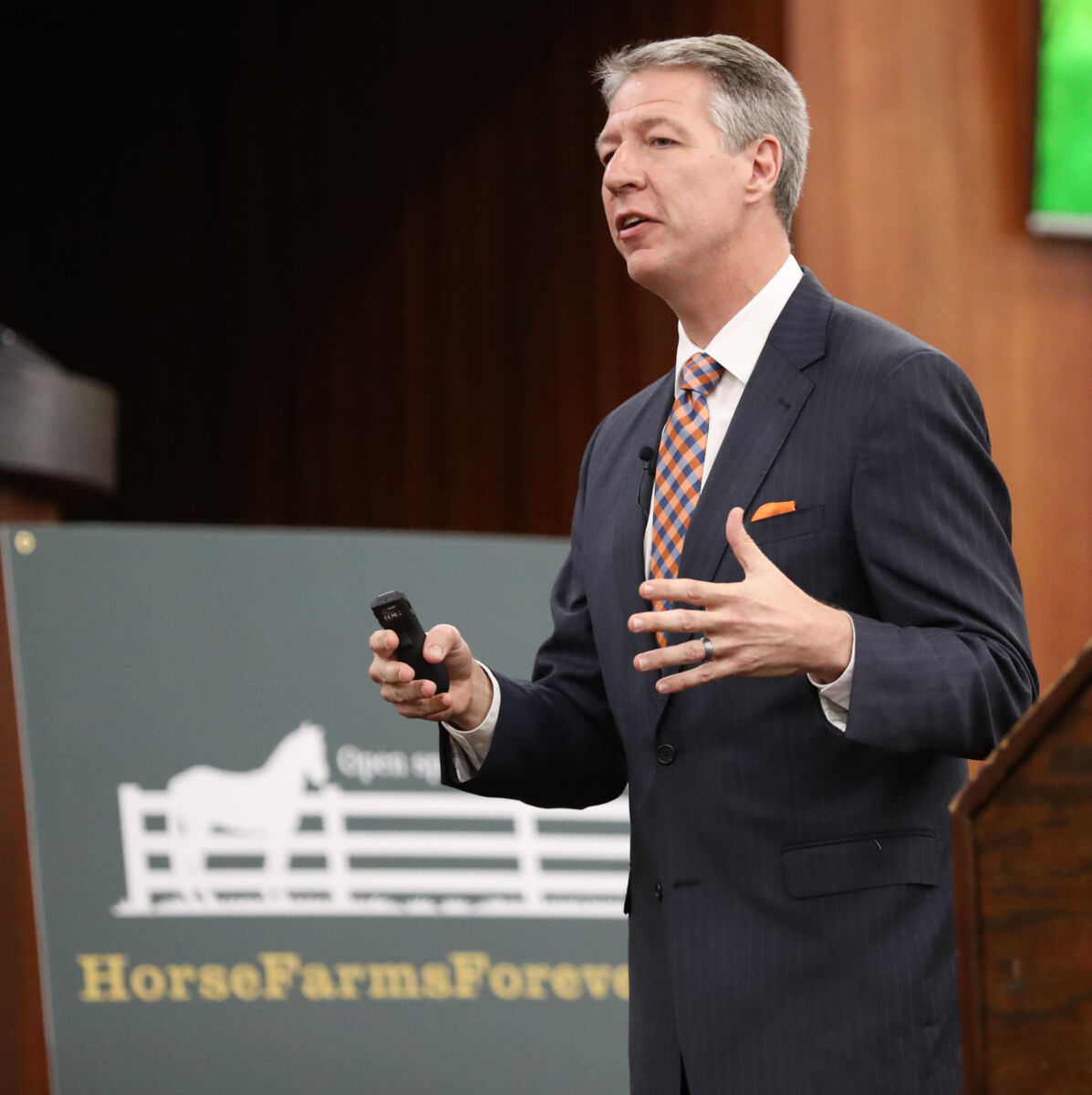 Kevin Sheilley, the president and CEO of the Ocala Metro Chamber and Economic Partnership, speaks during the Conversations About Conservation Horse Farms Forever Conservation Summit at the Ocala Breeders’ Sales Company in Ocala on Tuesday, Nov. 23, 2021. [Bruce Ackerman/Ocala Gazette]

Collaboration, growth, and a desire to conserve Ocala’s farmlands were some of the main topics at the 2021 Conservation Summit hosted by Horse Farms Forever.

During his speech delivered virtually from Virginia, Malone talked about what, in his opinion, makes Ocala distinct and worthy of preserving.

“So, when you look at the energy of somewhere like Ocala, which has this great heritage in horses and Thoroughbred horses, it’s kind of a unique area when you think about areas that deserve preservation. There aren’t that many places on the planet that are great for raising and training horses. The best ones have deep limestone soils,” he said.

The soil Malone is referring to is only found in four places in the world. In addition to being found in Ocala/Marion County, it can be found in Newmarket, England, Chantilly, France, and Lexington, Kentucky.

Also, during his speech, Malone highlighted what stood out to him about Ocala.

“We saw something quite unique in the Ocala area, which is rapidly filling in but still has a substantial amount of open spaces…it [open spaces] is a unique asset that once it gets developed, it doesn’t become open again.”

Marion County Commissioner Michelle Stone was one of the two hundred or so in attendance, and she agreed with Malone’s comments.

“So truly it was a pleasure to sit in the audience to hear the CEP as well as Horse Farms Forever come together in partnership, recognizing the better we all work as partners, the better community we’re going to have. And that includes making sure that we continue to have open spaces in this special community.”

In addition to Malone’s remarks, CEP President and CEO Kevin Sheilley gave a presentation showcasing the economic aspects of Ocala and Marion County where he touched on the location as a logistical hub for product distribution as well as international companies such as E-1 and Signature Brands that call Ocala home in some way.

Sheilley also highlighted the growth the county is expected to see in the coming months and years as well as how the equine industry is an economic driver for Ocala.

“We’ve had a great partnership with Horse Farms Forever the last couple of years because our missions aligned, but they’re separate,” Sheilley said after the event.

“We’re about attracting business and diversifying our economy and growing incomes, and Horse Farms Forever is about preservation, and so, we know they’re watching very closely in a lot of these areas, in particular in the Farmland Preservation Area. They’re really a great resource for us, we share information back and forth. We support their mission, they recognize that we’ve got to have growth and infill in core urban areas,” he continued.

During his presentation, Sheilley also shared the results of a quality of life survey that was commissioned earlier this year.

He reported that 29.5 percent of the 1,204 respondents listed preservation of land and natural resources as the most important issue facing the county, while 21.4percent said transportation and traffic, 19.3 percent mentioned population growth, 11.2 percent said affordable housing, and 8 percent said economic development.

Additional results from the survey pointed to its respondents believing the county should place a high priority on conserving local scenic land as well as placing a high importance on preserving local farmland.

The survey was done in partnership with the CEP, the College of Central Florida, the Florida Thoroughbred Breeders and Owners Association, Horse Farms Forever, and other partners and measured the perception of Marion County residents and their future vision for the community.

“Please protect our trees and our roadsides,” Weber said during her comments.

“I came here, as many of you did, because it was rural. It was quiet. You could have a nice little place. Now? 10,000 houses going up on this corner, 20,000 on the next. It gives me great concern…help us preserve it,” she said.

To preserve the natural aspects of the county, the Marion County Commission created the Farmland Preservation Area (FPA) in 2005 to manage growth and protect the area’s valuable soils, water, and spring sheds.

According to its website, Horse Farms Forever’s mission since 2018 has been to “preserve the character and culture that horses, horse farms, and the 193,000 acre Farmland Preservation Area bring to Marion County. The organization is focused on raising awareness about protecting horse farms and advocating for the protection of the FPA from the threat of unplanned growth and road development.”