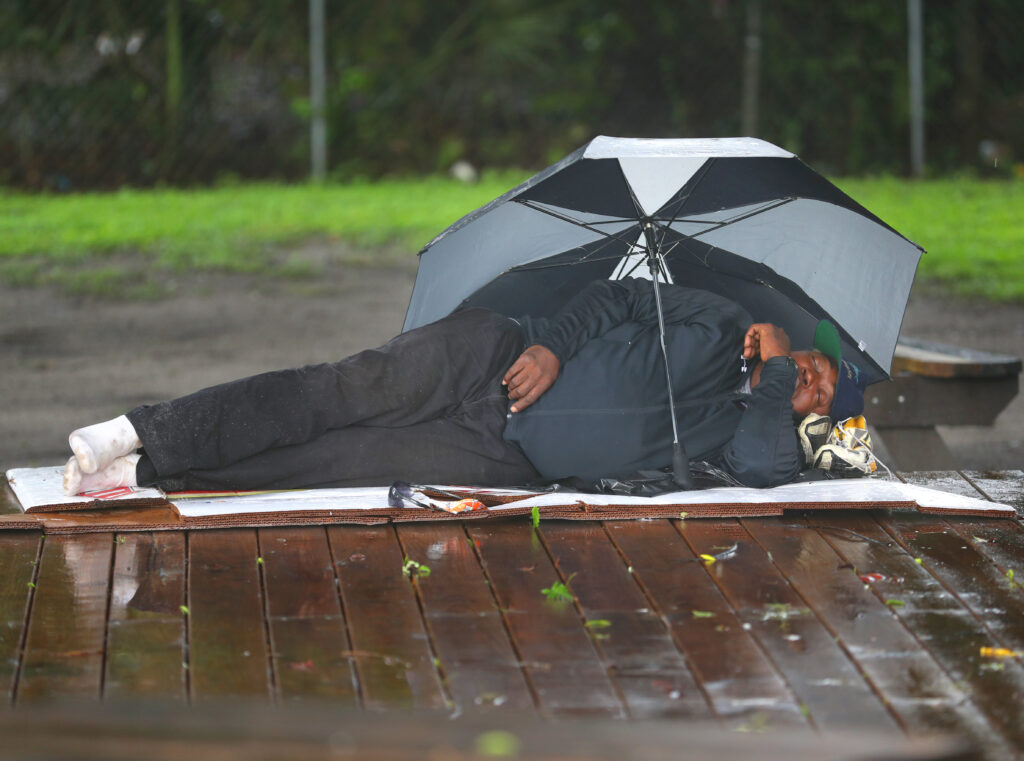 An unidentified homeless man tries to stay dry under an umbrella as he sleeps in the rain at Interfaith Emergency Services. [Bruce Ackerman/Ocala Gazette]

An unidentified homeless man tries to stay dry under an umbrella as he sleeps in the rain at Interfaith Emergency Services. [Bruce Ackerman/Ocala Gazette]

The council took up an amendment changing the portion of the ordinance cited by the U.S. Middle District of Florida that relates to arresting people who identify as homeless.

Currently, the ordinance states a person is subject to arrest in the city if they are sleeping in public and admit to being homeless.

The proposed change would eliminate that section. The amendment will come before the council again on March 2, where they will vote on final adoption.

Patrick Gilligan, one of the city’s attorneys, told the council on Tuesday that the reference to homelessness is unnecessary.

“We don’t arrest people because they are homeless,” Gilligan said. “Contrary to popular opinion, our officers exercise tremendous discretion and humanity in dealing with people they deal with.”

Gilligan said officers arrest those who display anti-social behavior and believe the rules don’t apply to them.

“Our officers also come across people who have had bad stuff (happen to them),” he said, adding they work with those people.

Gilligan said he met with Ocala Police Department Chief Mike Balken and Mayor Kent Guinn and believes they came up with a due process method that that court would accept.

“For private property, you have the right to say, ‘I don’t want that guy ever on my property again.’ Public property is supposed to be a little bit different,” he said.

While he thinks removing the homeless reference from the ordinance would also satisfy Moore’s order that officers check the availability of shelter space before arresting anyone. He said OPD would compile a list of shelter beds available in the area, anyway.

“There are a number of providers that have bed space. We’re going to get a system where we contact those providers every day. We really want to know that. Not everyone they pick up for unlawful lodging are people with incredibly anti-social behavior,” Gilligan said.

In September 2019, The ACLU of Florida, Southern Legal Counsel and Andy Pozzuto sued the city on behalf of plaintiffs Patrick McArdle, Courtney Ramsey and Anthony Cummings, arguing the city’s ordinance violated the plaintiff’s rights under the Eighth and 14th Amendments to the U.S. Constitution.

On Feb. 8, the court ruled arresting homeless people who don’t have access to shelters is cruel and unusual punishment violating the Eighth Amendment. Issuing trespass warnings without a process for appeal violated the 14th Amendment’s due process clause. The court also ordered the trespass warnings for McArdle, Ramsey and Cummings rescinded.

McArdle, Ramsey and Cummings were all arrested and given multiple trespass warnings for violating the city ordinance.

Together, they spent 210 days in jail and were assessed over $9,000 in fines, fees and costs for breaking either the trespassing or open lodging ordinances, according to the lawsuit.

According to the complaint, Marion County’s 2019 official homeless count revealed that 475 people do not have a fixed and regular residence. There are 171 emergency shelter beds available in Ocala, many of which have requirements, including background checks or drug and alcohol use policies. Much of the shelter space, the complaint adds, is available only to men and women with children.

Guinn has spent much of his near-decade tenure as Ocala’s mayor trying to deal with the homeless situation near downtown.

“We don’t have a problem, obviously, with people (coming) to eat and leave,” Guinn said in a December interview. “But they can’t set up shop here and just take over the street and pass out in the street, you know, selling drugs in the street … prostituting themselves. That’s like ground zero for a lot of criminal activity that goes on.”

It’s an issue the city has tried to address. In 2017, the city considered building a homeless pavilion. But the $500,000 project, which included bathrooms and showers, fizzled due to funding issues.

In December, Guinn brought up the idea of erecting a facility similar to Pinellas County’s Safe Harbor.

Safe Harbor, located in Clearwater, partners with the Pinellas County jail and offers shelter known as “low-barrier.” That type of shelter has few requirements. Ocala does not have a low-barrier shelter.