Holiday with the Herd pairs up artists and patrons 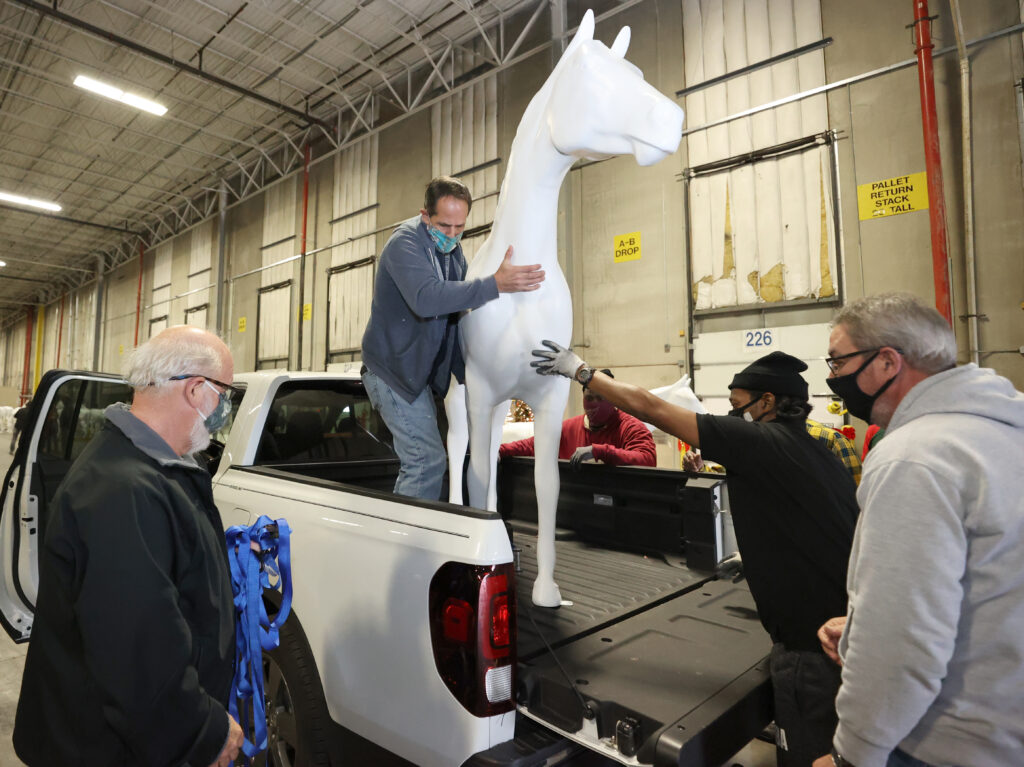 Artist Gene Hotaling, left, looks on as Mark Ehret, Brent Lavan, Ron Hamilton and Steve Banas, left to right, who are all Transformco warehouse workers, help load the first Horse Fever 20/20 horse to be delivered, to the pickup truck of artist Gene Hotaling during the Horse Fever 20/20 Holiday With the Herd event at the Transformco warehouse in Ocala, Fla. on Thursday, Dec. 17, 2020. [Bruce Ackerman/Ocala Gazette] 2020.

Artist Gene Hotaling, left, looks on as Mark Ehret, Brent Lavan, Ron Hamilton and Steve Banas, left to right, who are all Transformco warehouse workers, help load the first Horse Fever 20/20 horse to be delivered, to the pickup truck of artist Gene Hotaling during the Horse Fever 20/20 Holiday With the Herd event at the Transformco warehouse in Ocala, Fla. on Thursday, Dec. 17, 2020. [Bruce Ackerman/Ocala Gazette] 2020.

There was no reining in the excitement at today’s Horse Fever 20/20 “Holiday with the Herd” event showcasing the artists and their patrons.

The event, hosted by the Marion Cultural Alliance, was held at the official “stable” for the endeavor, which is the Transformco warehouse on Southwest 52nd Avenue. The 15-horse “Anniversary Herd” arrived via semi on Dec. 10 from Chicago.

The first Horse Fever public art project was launched in 2000, followed by Horse Fever in Motion in 2005 and Horse Fever II in 2011. The initial Horse Fever was the seed for formation of the alliance, which has since given more than $350,000 in grants to artists and organizations.

The artists were selected through a competitive call. Jurors selected the designs from more than 50 submissions. The artists have six weeks to complete their creative process.

Margaret Watts, who is widely known for her landscapes and paintings of historic venues all around the area, is painting a Horse Fever horse for the third time. She said she is eager to begin.

“I’m excited, I’m really excited,” she said. “I have told all the neighborhood kids, ‘You have to come see Miss Peggy’s horse. It’s going to be in the house.’”

She estimates she will work on her design roughly five hours a day.

“It’s acrylic paint, so it will dry fast,” she noted. “It’s a landscape. One side is the swampy area at Silver River (Springs) State Park, and the other side is Scott Springs, a beautiful area. And I want to put some of those immature ibis that are running all over town.”

Her first horse was Ocali Sun, which is in Maryland. Her second was Old Ocala, featuring historic venues that no longer exist. It remains on a horse farm in town.

“We’re so excited to see the artists match up with their donors and their horses. I can’t wait to see what they bring back,” stated Laurie Zink, co-chair of Horse Fever 20/20 with Jo Salyers. “And I also am really happy to see that the community is excited again and they have been so supportive and so wonderful.”

Zink said a VIP reveal of the painted horses will take place Feb. 8, with a public reveal set for Feb. 11, both at Transformco.

“It will be hugely socially distanced, room for everyone to see them. It will be here, in the parking lots, so everyone will have ample distancing and space,” she noted.

Jaye Baillie, executive director of the Marion Cultural Alliance, said that Valerie Dailey, of Showcase Properties of Central Florida, “was the first person who picked up the phone and said ‘I want to be a part of Horse Fever 20/20.’”

“She picked a beautiful design and we’re so excited,” Baillie added.

“We are paired with Paul Ware and he is doing the cancer horse called Hope,” Dailey said.

“Paul did a lot of research because there are so many different color ribbons and he wanted this to be a symbol of hope for anyone who has any type of cancer,” Baillie explained. 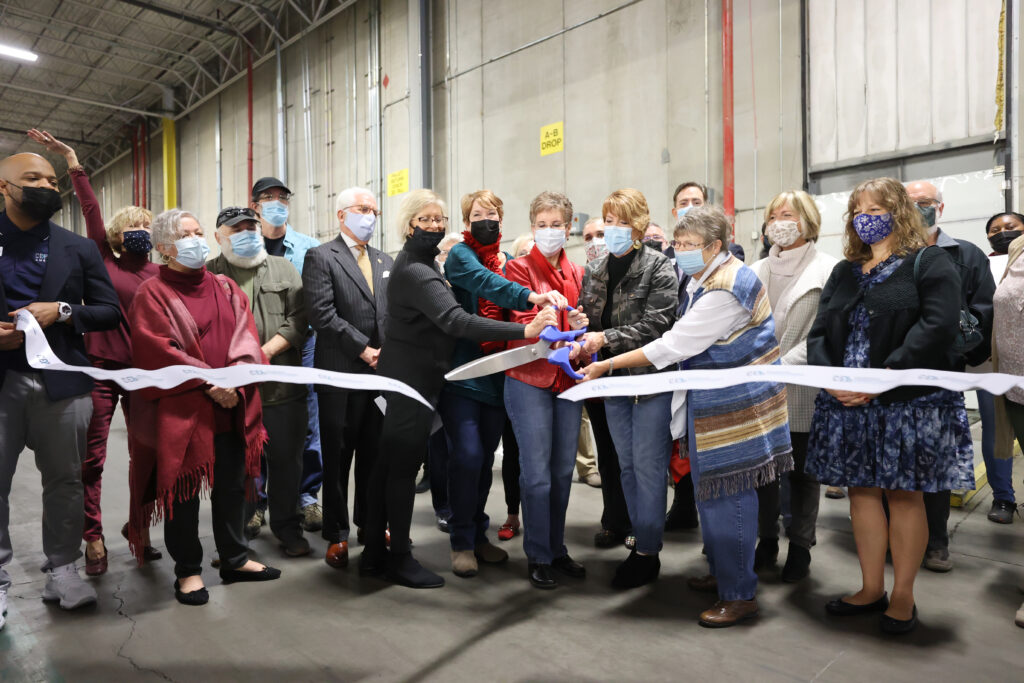 People gather in front of the herd of horses for the ribbon cutting during the Horse Fever 20/20 Holiday With the Herd event at the Transformco warehouse in Ocala, Fla. on Thursday, Dec. 17, 2020. [Bruce Ackerman/Ocala Gazette] 2020.

“We’re excited to help spread the word about the arts in Marion County,” Dailey added. “We’re going to do a blog about the whole process, get pictures with the artist as he progresses, spread the word, and then have people come and visit the horse once it’s installed and, hopefully, have events with the cancer society maybe.”

Artist Maggie Weakley also is doing a horse for the third time. Her patron is Diane Palmer.

“I did Horse Fly and then I did Celeste and now I’m doing Kind Hearted. It’s a horse filled with children of all different races and Diane says it is going into this camp for kids that have medical problems, and it’s free for them, so she wants me to add kids without any hair and different disabilities,” Weakley stated. “And all the children have T-shirts on with kind words. I’m really honored.”

In one poignant moment during the event, Zink introduced members of the Hershberger family, several of whom are former or current Horse Fever artists. Zink teared up as she spoke about the late artist MaryLee Hershberger, 83, who died Dec. 6, after a short bout with COVID-19. Zink introduced her husband, Floyd, owner of B-J Trophies, their son Mark and his wife Carlynne, and grandson Christopher.

Mark Hershberger created the Horse Fever horse Clockwork Fury, which is the official anniversary ambassador for Horse Fever 20/20, and which is owned by Brent and Crystal Fernung of Journeyman Bloodstock. The horse is currently on an “international tour,” Zink told those gathered.

“This year, due to the pandemic and so many charities having a hard time, Journeyman has graciously donated Clockwork Fury back to the program,” Zink said. “He will sell as the last hip number on the first day of the March sale at OBS (Ocala Breeders’ Sales) in live auction. His proceeds, in the spirit of all the horses in Horse Fever, will benefit MCA and all of its grant programs, and the Florida Thoroughbred Charities, in particular the Second Chances Farm at the women’s prison, where the ladies learn to take care of the horses as part of their rehabilitation. There is only a 3 percent recidivism rate—3 percent—with that program.”

Clockwork Fury will go up for sale on March 17, with proceeds to benefit the Thoroughbred Retirement Foundation’s Second Chances Farm at the Lowell Correctional Institution and the Florida Thoroughbred Charities Youth Scholarship Programs.

A news release from the alliance noted that “HF 20/20 is brought to you by Marion Cultural Alliance and Florida Thoroughbred Breeders’ and Owners’ Association. In the spirit of the Horse Fever Public Art Project, first launched in 2001, funds raised through HF 20/20 will benefit the ability of Marion Cultural Alliance to fund grants, support local arts and community nonprofits and ensure the continued growth of our endowment.”

“This new herd is a phenomenal way to celebrate MCA’s 20th anniversary as well as add new public art to our community,” Salyers noted in the release.

There will be several opportunities for the public to see the Horse Fever 20/20 herd. To learn more, go to mcaocala.org/hf-2020.