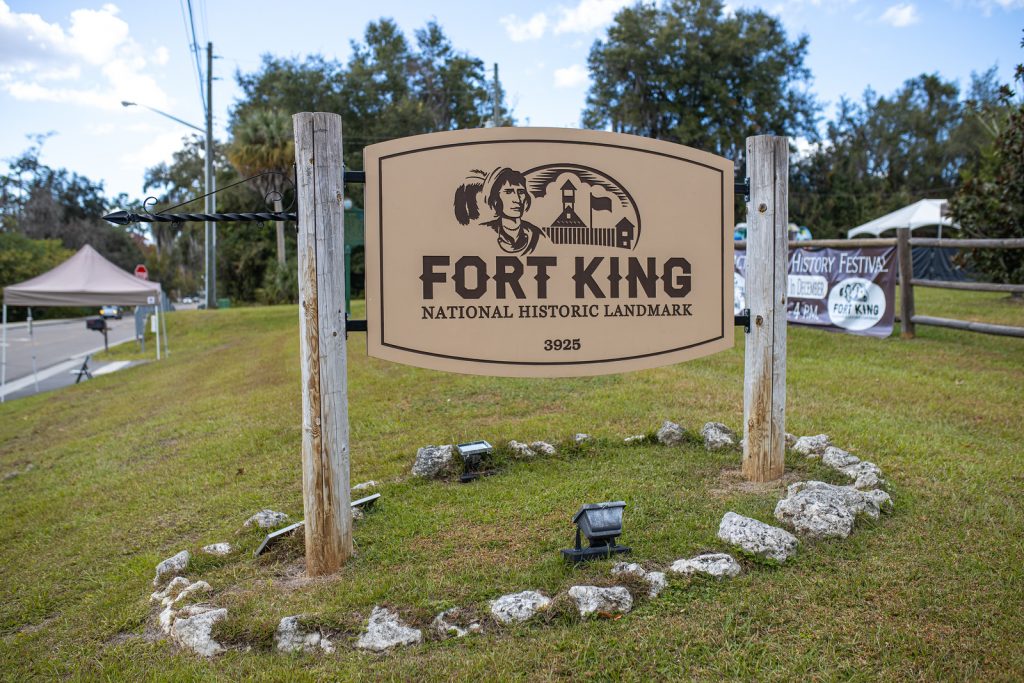 The Fort King Heritage Association is proceeding with a nearly $15 million plan to bolster the locally renowned historical site as an educational tool and as a magnet for tourists.

Appearing before the County Commission and Ocala City Council on Tuesday, representatives of the association unveiled the concept for the site spanning the next 15 years.

The centerpiece will be a 21,000-square-foot museum and educational center, according to association board member Bill Tucker. The plan also calls for completing existing buildings both inside and outside the fort.

“We believe that, looking over the next 15 years, this will end up being a world-class facility that will bring people from all over the United States in to study the Seminole wars,” Tucker told the County Commission.

Both the County Commission and City Council unanimously approved the plan.

Bill Rodriguez, head of the city’s parks division, expects the facility will be a boon as an educational and tourism resource. He told the County Commission that most tourists in Florida visit a historical site while here, and that they tend to spend more time and money than other guests.

In an interview, Rodriguez said the document will be forwarded to the state within the next 60 days for final approval.

No pitfalls are anticipated, he added, primarily because the Seminole tribe has been intimately involved in developing the plan.

Paul Backhouse, senior director of the Seminole tribe’s heritage and environmental resources department, concurred. As a result, the Seminoles are “absolutely behind” the project, he said.

Rodriguez, he said, “has been very good at involving the tribe in every step of the planning. We’re very excited about what they’re doing.”

As state officials vet the plan, work at the 42-acre site, which was designated a national historic landmark in 2004, can continue.

For example, Rodriguez said, the effort to replicate the blacksmith shop remains ongoing and is expected to be finished in the fall.

The point of the master plan, Rodriguez said, is to give the Fort King Heritage Association, or FKHA, “something to go off” when seeking funding for the project, whose cost was derived from restoration projects done at the Silver River Museum in Ocala and others around the state.

Private donors and fundraising events will be an avenue the FKHA will explore.

But the group will also work to secure funding through federal and state appropriations or grants.

The plan “allows these guys to go up to the legislative branches and tell them we’re looking for help in telling our state history and our national history,” Rodriguez said.

“They’ve really ramped up the board and have the know-how to go after these funds.”

The FKHA board includes state Rep. Charlie Stone, R-Ocala, as well as former Florida House Speaker Larry Cretul and county Tax Collector George Albright, who spent 12 years in the Legislature before being elected to his current post.

The association can certainly make the case Fort King is a prominent piece of Florida’s history.

In the first half of the 19th century it served as a U.S. Army outpost on the frontier of Native American lands as white settlers pushed south. Foremost among those Native American tribes were the Seminoles.

In 1834, the federal government inked a treaty with some Seminoles to leave the region. But others in the tribe objected and the government subsequently maneuvered to forcibly remove them. Violent clashes ensued.

In December 1835 Maj. Francis Dade led troops from the Tampa area to reinforce Fort King. The Seminoles ambushed him en route to Ocala. That same day in Ocala, the famed Seminole war chief Osceola led an attack on Fort King that killed Wiley Thompson, the federal agent appointed to oversee the Seminoles’ removal, and a handful of others. The incidents ignited the Second Seminole War, a seven-year-long conflict that became the longest and bloodiest fight between the U.S. Army and the Native Americans.

According to Rodriguez, the restoration project will encompass the new education center and museum, estimated at $7.4 million and slated for completion in 2025. Also planned are replicas of troops quarters, a mess hall that later became the first county courthouse for Marion County, a guard shack and other features, such as a walking trail and public restrooms.

Rodriguez added that if historical records verify its location, the updated Fort King also will house a replica of the Indian Removal Agency building that served as Wiley Thompson’s headquarters.

Overall, the project is expected to cost $14.7 million.

Darrell Riley, a history professor at the College of Central Florida, said he welcomed the project. But, he added, to truly represent the history of Fort King it should recall all who helped shape the story of the area.

“I just hope this site is a lot more inclusive than the original reconstruction,” said Riley, noting that the initial attempt was unfavorable to the Seminoles and didn’t sufficiently convey the contribution of black Americans.

“I know the Fort King Heritage Association has tried to work with the Seminoles and with some success, but it’s got to improve because building that fort might be seen as not a good thing — because (for the Seminoles) Fort King was something to be hated.”

“I’m all for getting history out there,” said Riley, “I just hope the whole story gets told.”

Rodriguez said it will be.

The Seminole tribe has been involved along the way, he said, pointing out that he made their partnership a priority after joining the city five years ago from the National Park Service.

“We want to make sure we are telling 100 percent of the story,” Rodriguez said. “That’s been our full intention from the get-go and we won’t waver from that.”

Backhouse applauded Rodriguez for that.

“It was very much one-sided, but now the tribe’s voice is front and center,” Backhouse said.

“He’s pretty relentless in providing us as much input as possible. So, we will be engaged as much as possible. The tribe is really behind everything they’re doing, and the opportunity here is making sure future members of the tribe can be involved in Fort King.”