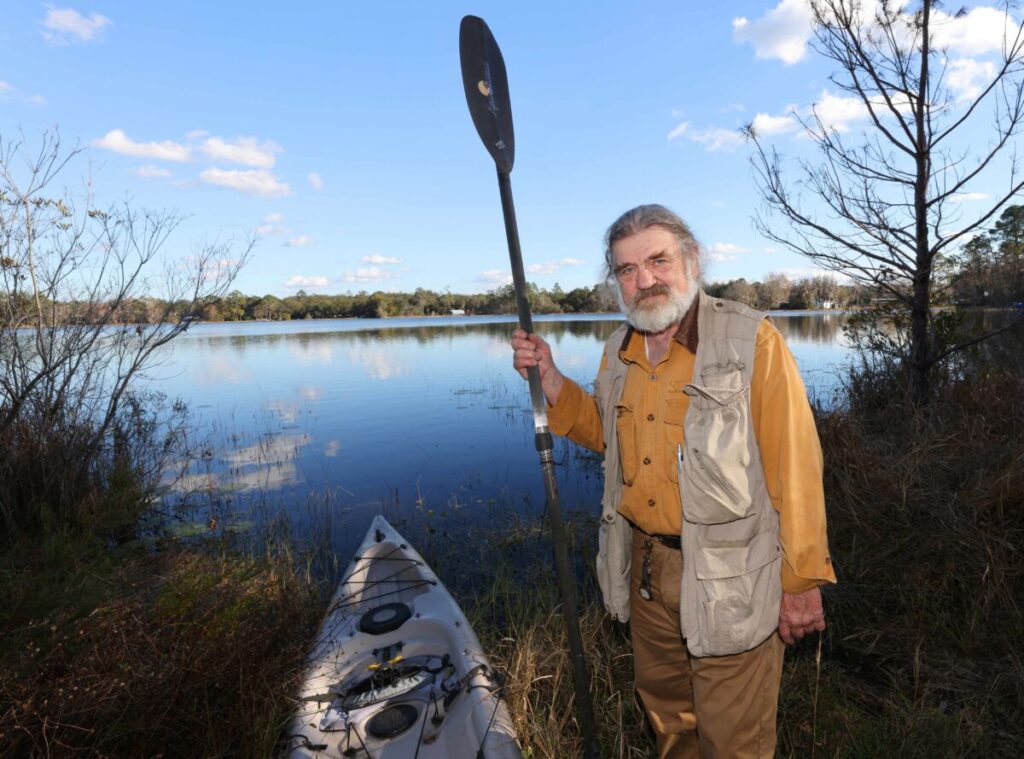 Leo Sandgren poses with a kayak by his home on Lake Joe in the Ocala National Forest east of Ocala, Fla. on Monday, Jan. 9, 2023. [Bruce Ackerman/Ocala Gazette] 2022.

From his birth in Bemidji, Minnesota, Dr. Leo Sandgren has traveled around the United States and lived in or visited over 50 other countries.

One of his favorite places to visit is Patagonia, which makes up Chile and Argentina, the “bottom third of South America. The landscape there is just beautiful,” he enthused, adding, “I would like to do it again.”

Leo’s great-grandmother was born in Sweden in 1854 and emigrated to the United States. His father, born in the U.S., was in the military during World War II. He returned to Minnesota to marry his high school sweetheart and got a college degree majoring in math. Five children were born to the couple: Leo, a sister Sheri, and three brothers, David, Eric and Mark.

When Leo was just 2 years old, his family moved to Grand Marais, Minnesota, on Lake Superior, where his father taught high school and coached football. But it was his father’s education and career in Biblical studies, however, that led the family to the far reaches of the world.

During that time, his father went on an African safari, and later, felt a calling to go to Africa as a missionary. He went to Columbia Bible College in Columbia, South Carolina, and then moved the family to France for two years to study the language. Leo was sent to a French school when he was 10, and the family remained in France for two years before moving to the mission field in the Central African Republic, and then north to Chad. The children were in a CAR boarding school eight months of the year, going to be with the family in Chad only for holidays.

After living in Africa, Leo was placed back a year in his schooling so he could relearn English. This took him through the eighth grade, and he took a correspondence class for his ninth-grade schooling.

Two years in Wheaton College, Illinois, and two years at the University of Washington in Seattle, saw Leo graduate with two bachelor of arts degrees, one in anthropology and one in sociology.

Following this, he returned to Africa, but not with his family. He taught in a secondary school Bible college for a year. He visited missionaries in the Democratic Republic of the Congo, southwest of where he was teaching.

One day, a nurse found a baby bonobo (called a pygmy chimpanzee), and Leo kept him for a year, naming him Julius after Julius Caesar. “I had two or three monkeys before, but Julius was a serendipitous reward for someone who loves primates,” Leo said.

Wanting to gain more international experience and “seeking more Biblical knowledge,” Leo moved again, this time to attend the London School of Theology in England, where he earned his master of divinity degree in 1975. “The American system was too parochial, and I wanted to broaden my scope of theology. I met lots of people there from around the world,” he said.

Already interested in Israel because Jesus was Jewish, Leo traveled one summer to Israel to learn the history of Jesus’ life and background. He decided to move to Israel and he lived there for four years on a kibbutz (a communal farm). He traveled around Israel and learned Hebrew, noting it was a “good orientation to living where Jesus grew up. It deepened my understanding of the Bible background.”

He spent time in Jerusalem and went to the Sinai Peninsula because Israel controlled it at that time. “It completed my Biblical education from a parochial view to a more broad and authentic point of view,” he explained.

Leo returned in 1981 to the United States and wrote an as-yet unpublished manuscript for a historical novel.

In 1997, Leo received a doctor of divinity degree at the University of North Carolina at Chapel Hill, with a focus on Ancient Mediterranean Religion.

He has written two books that have been published and are available on Amazon. “The Shadow of God” was published in 2003 and includes stories from early Judaism. In 2011, he wrote  an 800-plus book titled, “Vines Intertwined: A History of Jews and Christians  from the Babylonian Exile to the Advent of Islam.”

Leo began teaching several courses in the University of Florida’s department of religion in 1998. He retired in 2013.

A private person, Leo lives in a somewhat secluded, peaceful and beautiful spot on the shore of Lake Joe in Silver Springs. The lake is one third of a mile across, he said. There are bass and bluegill in the lake, and he enjoys kayaking there. His brother David and his wife live next door to him. They have a son, who lives in Ocala, and two daughters who live in Colorado, and one daughter in Washington State. Leo’s sister Sheri passed away recently of COVID-19, he shared. Brother Eric lives in Hawthorne. Mark married a British woman, and they have two sons and two daughters. That family lives in Australia.

Leo is an elder at the Brick City Church in Ocala and is responsible for Bible studies.

He gardens and enjoys yard work, kayaking and studying. “I have plenty of curiosity to keep me going,” he concluded.