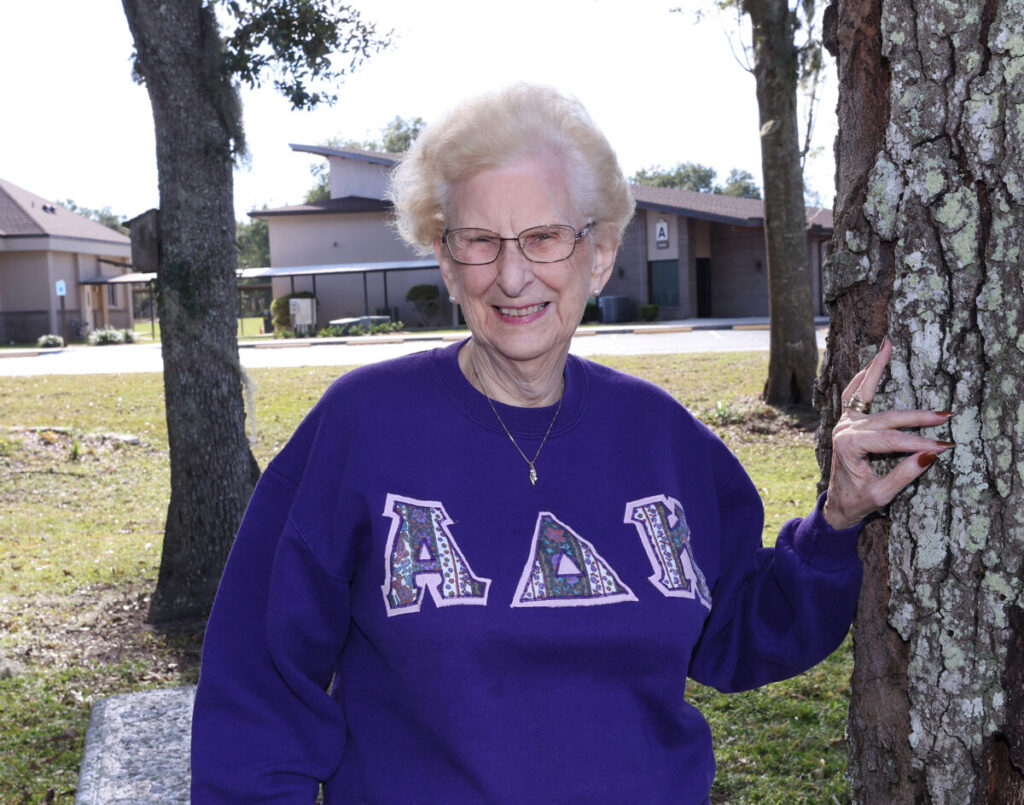 Elaine Whiteaker poses for a photo by the College Road Baptist Church in Ocala on Monday, Nov. 21, 2022. [Bruce Ackerman/Ocala Gazette] 2022.

Elaine Whiteaker moved to Ocala 31 years ago with her husband, Howard, after they had retired from their teaching careers in Carlton, Michigan.

Elaine was born in Kentucky, and after high school she graduated from Spencerian Business School in Louisville, Kentucky. Her first job was in the directory division of Southern Bell Telephone Company in Louisville.

“I knew I didn’t want to do this for the rest of my life,” she said, adding, “I had always wanted to be a teacher.” She enrolled at Georgetown College in Georgetown, Kentucky, and after graduation, she taught high school business classes in Ferguson, Kentucky. That’s where she met her future husband, who was a science teacher at the school.

The couple has two children; son, Marvin, who lives in Summerfield, Florida, and daughter Sharon, who lives in Monroe, Michigan. They have six grandchildren.

While in Michigan, Whiteaker taught shorthand at night school at a Monroe County Community College. “I like shorthand the best. It takes concentration,” she shared.

During her time in Michigan, Whiteaker was invited to join Alpha Delta Kappa, an international organization for women educators. In Michigan, she served as the local chapter president, district chairman and state president from 1988 to 1990.

The Whiteakers both retired from teaching at the same time and attended a seminar in Michigan where homes in Florida were promoted. They decided they preferred the Florida heat to the cold and snowy winter weather in the north. They looked at homes in Winter Haven first but, “Ocala looked so much like Lexington when we first came here. We loved the farmland and the beauty of the area and that it was horse country,” she said. “The weather was wonderful.” They moved to Ocala in November of 1990.

The couple were both involved with the Public Education Foundation of Marion County, and the Take Stock in Children program under auspices of the PEFMC. They were able to enjoy traveling and took several cruises, including to the Baltic Sea and going to St. Petersburg in Russia: New Zealand and Australia, and Alaska. They have visited all 50 United States.

At an event for her ADK sorority, Whiteaker connected with two sorority sisters and she has traveled extensively with them, visiting England, Scotland, Ireland, and Wales. One of her favorite excursions was on a Viking River Cruise to Budapest.

“It was a 16-day trip, and I didn’t want to get off!” she exclaimed. She has been on an African safari while she had a bad fracture in one of her feet and had to wear an immobilizing “boot” the whole time.

Whiteaker’s involvement with the Public Education Foundation began when she was hired as a secretary, and she still works there in either paid or volunteer positions. She was asked to serve on the leadership council for the Take Stock in Children program, which she has done for several years.

“I think the Take Stock in Children is the best program in the world,” Whiteaker said, explaining that children who are accepted into and complete this program through their four high school years are provided financially for two years of college education. This effort works in conjunction with the Florida Prepaid College Program.

There is a process to selecting students for the program, according to Whiteaker. All applications, which are extensive, must be received in December. Whitaker reviews all the applications, which sometimes number up to 160 and come from all 10 middle schools. The top students chosen are interviewed and 50 each year are awarded scholarships to participate in the high school program.

Students are chosen during their eighth-grade school year. Guidelines are that they must have at least a 2.5 grade point average (GPA), be drug and crime free and stay in school. They are usually from economically disadvantaged backgrounds. A mentor is matched to each student for the entire four-year program.

The organization accepts donations for the program and hold a fundraiser each year, which for 2023 will be a golf tournament in January.

Whiteaker is an active member of the College Road Baptist Church, being a greeter, preparing snacks for the children’s Sunday School program, and serves on the kitchen committee. She was on the building committee for the current church building.

“In my retirement years, the sorority (ADK) has kept me going. I attend conferences and conventions and meet people at these events I had known years before. Some of the members are still teaching, and it is rewarding to be involved with the group,” Whiteaker commented.

“I thank God that He’s given me the strength and energy to volunteer,’’ she said. “I consider volunteering a blessing.”