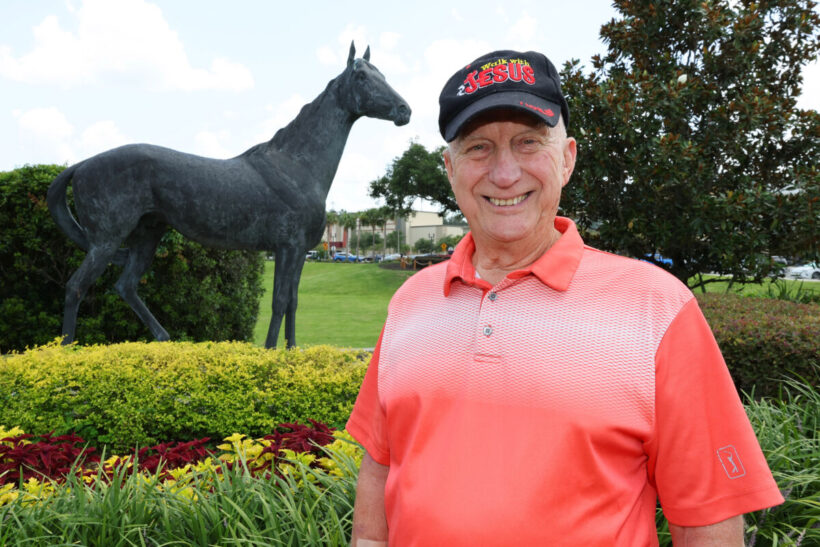 Brian Blair by the statue of Needles at Market Street at Heath Brook in Ocala on July 29, 2022. [Bruce Ackerman/Ocala Gazette] 2022.

Despite all the places in the world Brian Blair has been, “Ocala is the best. I will not leave here,” he said.

Blair has traveled extensively during his lifetime, internationally while serving in the U.S. Navy and in his professional career, as well as personally all over the United States. And his life has been as interesting as his travelog.

Born in New Jersey, the third of 10 children, he could not wait to leave home. His mother died when he was 11 months old and his father, he said, became regimented and strict, although being a “born-again Christian.” Brian said he accepted Jesus as his savior at the age of 11 and that “things were fine for several years.” He hinted, however, that there were challenges within the family and so, as soon as he could, he joined the Navy so he could leave home, “and become my own man.”

“On the first day of boot camp, I realized I had jumped out of the frying pan into the fire,” Blair remembers. “It was more regimented and stricter in the Navy than it was at home.”

By his own admission, he began to live for the world and all its allures.

“My motto was the familiar, ‘Eat, sleep and be merry, for the present is ours and who knows, on some nearby tomorrow we may die.’”

During his Navy career, Blair first was sent to Green Cove Springs in Florida then to Norfolk, Virginia, where he was stationed on the USS Diamondhead, an ammunition ship, which took him on Mediterranean cruises to Spain, France, Italy, Greece, Crete, Cypress, Lebanon and other locales. His Navy career ended in 1964.

Blair married and had three children: Dennis, who has five boys; Brian, who has one boy, three girls and a stepson; and Jessica, who has one daughter.

During the marriage, the family lived on an 18-acre working farm in upstate New York. They raised animals for meat and eggs for their own use and to sell, and grew and canned produce. The house was heated with wood he cut. In addition, he worked full-time as a pipefitter at a local hospital. After their home was destroyed by fire, the family moved to Spring Hill, Florida, as he liked the area from his stint there in the Navy.

“I got sand in my shoes and couldn’t get it out,” he quipped, explaining the move to Florida.

Blair developed a career in hospital maintenance that took him into many different experiences and locales, including Tampa, then went to Florida State University in Tallahassee as a maintenance construction superintendent. While there, he was promoted to Engineer II and did construction inspection. He has worked for the Florida Department of Corrections (FDOC) as a project manager for 12 prisons across the Panhandle, where, under his direction, five work camps were built as living spaces for the prisoners who worked for the FDOC outside the prison walls.

It was during the time he spent in Tallahassee that Blair and his wife were divorced.

On Valentine’s Day in 1982, a friend and his wife invited Blair to dinner to meet the woman’s sister, Deborah Lovett.

“It was love at first sight,” he said.

They were married the following September and quickly moved to Cairo, Georgia.

Deborah has one son, James Clayton. While the family lived in Cairo, they started going to a Baptist church close to their home. The church held a revival and Clayton was saved, then so was his mother, the next day. Then Blair rededicated his life to the Lord and things have not been the same since, he said.

He is a chaplain and said he has been a member of the Gideons Bible Society for 30 years. The couple became active in church work together.

Around this time, Blair decided to start his own business in general contracting and engineering, working on various construction projects and building houses. He was responsible for building an 850-seat sanctuary for a church in Georgia.

“That was my one pro-bono job,” he said.

After 9/11, the business closed because of the economy but Blair remained in the construction and engineering business. When Hurricane Katrina hit in New Orleans, he worked with the U.S. Army Corps of Engineers constructing new levies by sector gates that let ships pass through.

During their time in New Orleans, the couple decided to buy a house.

“We really liked Lubbock, Texas,” Blair said. “It was a tough decision between Texas and Ocala.”

Deborah’s mom lived in Live Oak, in north central Florida, and the couple liked Ocala and decided to move here.

“We love it here. We love to go to Rainbow Springs, where we go tubing, swimming and walking the trails,” he said.

Since living in Florida, Blair was instrumental in the building of a very large Veterans Administration (VA) hospital in New Orleans. He was a quality control inspector and estimator and later became a United States licensed Value Management Association representative. He still is involved in that business, working on state and federal government projects, developing more efficient and cost-effective methods to accomplish the required function of a building.

Until last October, he worked full-time. Now, at 79, he works part-time as a contingent employee doing value engineering work. He has been to Japan and South Korea doing building assessments at Army and Marine Corps base buildings, creating inventories the military uses for budgeting purposes. He will be traveling to Kuwait this fall to perform a study for a government building on a new college campus.

Blair always seems to have a smile on his face. When asked about that, he quickly answered, “When you have Jesus in your heart, you can always have a smile on your face. Brian is not No. 1. When you don’t think of yourself all the time and instead think of others, you can live in peace.”

Asked when he plans to retire, he quickly said with a smile, “When they throw dirt on my face. I love what I do. Why would I quit?”

Deborah does not want to travel with him to foreign lands, he said, so, “When I leave, I give her a kiss and tell her, ‘I’ll see you when I get back, or I’ll see you in Glory.’”