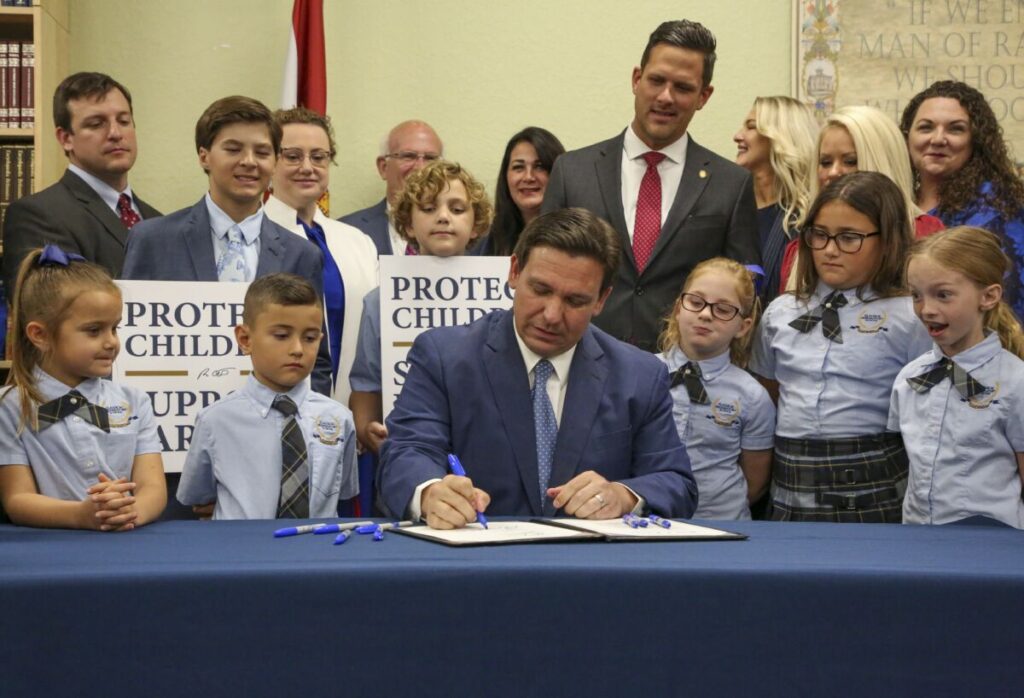 In this file photo, Florida Gov. Ron DeSantis signs the Parental Rights in Education bill at Classical Preparatory school, March 28, 2022 in Shady Hills. Hundreds of students at a central Florida high school were told they won’t get their yearbooks until they’re censored. The principal at Lyman High School says one page is out of compliance with school board policy. It shows images of students holding rainbow flags and a “love is love” sign during a protest of Florida’s Parental Rights in Education Act, otherwise known as the “Don’t Say Gay” law. [Douglas R. Clifford/Tampa Bay Times via AP]

A 17-year-old gay student who was suspended for leading protests at his high school against Florida’s so-called Don’t Say Gay legislation says school administrators are now stopping him from running for senior class president.

Because of the disciplinary infractions he received for leading the protests at Flagler Palm Coast High School in March, school administrators are preventing him for running for the elected student body office, Jack Petocz said in a letter posted on Twitter on Tuesday. The school is located about 30 miles (48 kilometers) north of Daytona Beach.

“I am continuing to be punished for standing up for my identity and against widespread hatred,” Petocz wrote. “We shouldn’t be subject to abuse both in Tallahassee and at-home.”

In an email, school district spokesman Jason Wheeler said Flagler Schools was not permitted to speak about individual students’ disciplinary records. Requirements for individual on-campus clubs or organizations are set by the schools or clubs themselves, he said.

Petocz is being honored next week with an award at the 2022 PEN America Literary Gala for organizing students to protest the Florida legislation and fighting book bans. PEN America is a New York-based nonprofit that advocates for free speech and is made up of novelists, journalists and other writers.

“Jack Petocz is leading his generation in fighting back against book bans and legislative efforts to police how individual identities can be discussed in schools,” PEN America said in a news release announcing that the Florida student would be receiving an award.

More than 500 Flagler Palm Coast High School students walked out in protest of the legislation in early March, as well as thousands of other students around Florida. Petocz says he defied school officials’ orders not to distribute 300 rainbow pride flags he had purchased for the protest. He was suspended for four days afterward, he said.