Gallery: Vanguard wins in dominant fashion over to Belleview to move to 7-0 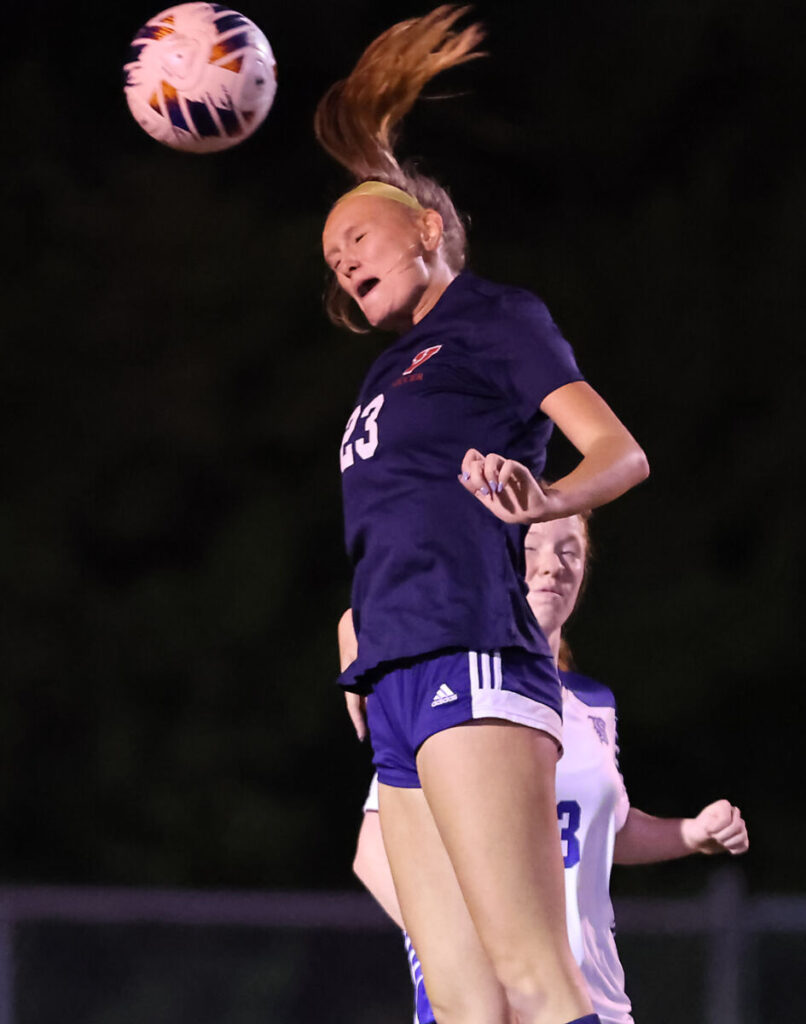 Tuesday night at Booster stadium featured a battle of the last two undefeated girls’ soccer teams in Marion County as the Vanguard Knights (6-0) faced off against the Belleview Rattlers (4-0).

The anticipation heading into the matchup was high as both teams were looking to stake their claim as the best team in the county.

Vanguard did not waste any time as senior Kaylee McCord fired in a goal off a corner kick pass just four minutes after the opening whistle. Six minutes later, senior Marleigh Martinez scored a goal on another corner kick to give Vanguard a 2-0 lead within the first 15 minutes of the game.

Martinez scorched the back of the net for the second time on a beautiful assist by McCord to extend the lead to 3-0. Vanguard used speed and physicality on defense to keep the ball on the offensive end as sophomore Amanda Egan notched her fifth goal of the season to make it 4-0.

The onslaught was on as Vanguard continued to attack on offense as McCord scored her second and third goals of the night within two minutes of each other. Following McCord getting a hat trick, Martinez scored her third goal of the night moments after her teammate to push the lead to 7-0.

Freshman Ashlyn Wan scored her fifth goal of the season to make the lead 8-0 after the ball ricocheted off the goal post and back to Wan for an open net. Martinez scored her fourth and final goal of the night less than a minute after Wan.

Vanguard finished off the victory with McCord picking up her fourth goal of the night and Egan blasting her second score of the night to give Vanguard an 11-0 win.

It was a humbling night for Belleview as they suffered their first loss of the season but head coach Melissa Leon feels her team learned a lot about themselves in the defeat and can use those lessons to improve.

“They’re upset, and they are hard on themselves. We are all hard on ourselves so we will have to learn from this game and do better next time,” Leon said.

She continued: “We’re coming off a win streak and we got a little excited and thought we’d be able to keep up, but we struggled a bit. We’ve got another game with Vanguard and next time we will be competitive.”

With the win, Vanguard moves to 7-0 on the season and head coach Jay Fratello knew his team was motivated and wanted to send a message on Tuesday night.

“We came out pretty strong, the girls have been working hard. I thought we had good touch on the ball with passing and moving. Some of these girls had a chip on their shoulder because these were two undefeated teams and we felt we were better, so they came out to prove that tonight,” Fratello said.

The senior duo of Martinez and McCord put on a show with eight combined goals, the two forwards now have a combined 24 goals through the first seven games of the season.

“It’s fun playing out here with a bunch of girls who we see during school and in class. It’s just good to come out here and have some fun with them, obviously scoring four goals is amazing but it feels better to do it with your team coming up to hug you and give you high fives,” Martinez said.

McCord added: “We’ve played together on 9 or 10 different club teams and there are a couple of other girls on the team that played with us as well. It’s cool for us to all be back and playing together again.”

With the fantastic start comes the responsibility of staying motivated and not getting complacent. A huge rivalry game against Forest looms on next Friday and Fratello is confident his team will continue to work hard and be motivated.

“Everybody has that circled on their calendar before the season starts. They’re a good team, well coached and have a lot of talent so we know we need to take care of business that night,” he said.

Belleview fell to 4-1 on the season and will be off until next Tuesday at 7 p.m. when they host Palatka. Vanguard is back in action on Monday when they host Lake Weir at 6 p.m.