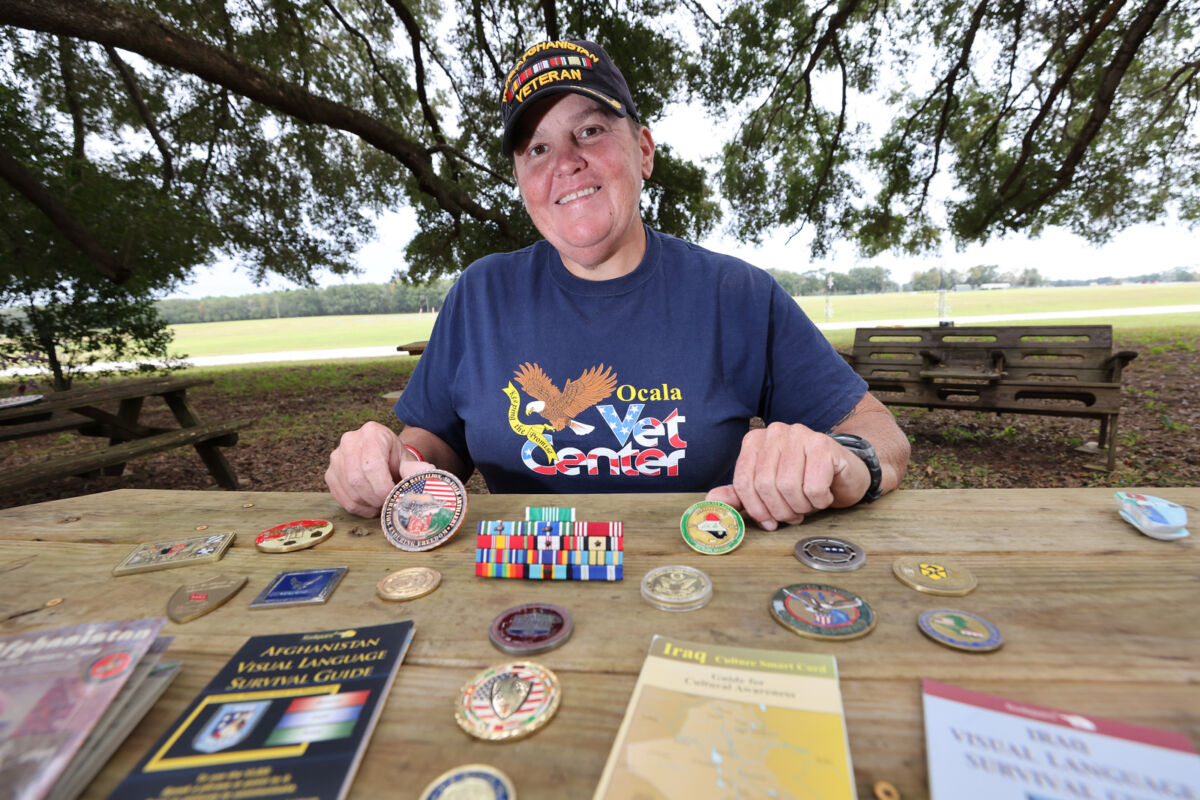 Virginia C. “Frenchie” Bisiaux, a U.S. Army veteran who fought in 5 combat tours including Iraq and Afghanistan, shows some of her memorabilia as she poses at the Florida Agriculture Center and Horse Park south of Ocala, Florida on Wednesday, Nov. 10, 2021.[Bruce Ackerman/Ocala Gazette] 2021.

Virginia C. “Frenchie” Bisiaux doesn’t see herself as a hero. She never took a bullet. Never lost an arm or a leg. But the back pain, the headaches, and the ongoing emotional traumas are subtle reminders of five military deployments to the Middle East, culminating with an attack that nearly ended her life.

Frenchie, as she prefers to be called, remembers with clarity her last deployment in Afghanistan when a roadside bomb demolished the ICV Stryker she was riding in.

“I was not driving that day. I was pulling guard,” she said, her musical French accent coming through, despite the disturbing memory. “I was standing in the hole when we hit the IUD. It was an armored vehicle, and it was totaled. I looked behind us and I could see the tire tracks of where we had been driving. Now, we were literally ten feet from where we had been. After the smoke cleared, the enemy started shooting at us. It was an ambush. The Afghan National Army were in convoy with us. They went, with guns blazing, after them. We were able to secure the area, and after a few hours, we finally got evacuated back to our base.”

Frenchie suffered a concussion, neck and back injuries, and traumas to her shoulders and both knees. Her weapon, which had been attached to the vehicle, had swung around, and struck her head.

“The five of us survived with minor injuries—a busted lip, a bloody nose,” she recalled. “None of us got shot.”

Born and raised in France, Frenchie was living in Ocala with a green card when she enlisted in the U.S. Army in 2007. After the conflict in Afghanistan, she was sent to the Warrior Transition Unit at Fort Bliss in El Paso, Texas, where, in addition to physical exams, she received psychological rehabilitation, including art therapy.

“I absolutely did not expect it to help,” Frenchie admits. “It was really surprising to me that somehow things came out that were bottled up inside. The art therapist didn’t make it easy on us. It wasn’t, ‘You can draw anything you want, like daisies and sunshine.’ It was, ‘Paint your trauma, paint things from your deployment.’ I painted the Stryker. I painted the explosion. It was painful but amazingly therapeutic. I think that was the first time I revisited it and literally saw myself there. But I was actually in El Paso, and I was O.K.”

“From the day I met her, she was very interested in doing art,” Braxton said. “She was definitely skeptical, but she liked art and she really wanted to participate. She was very committed to getting help and basically improving her life. I remember the very last day of that cohort, Frenchie was very emotional about how much art therapy had helped her. When you see that kind of emotionality, you say, ‘Yeah, this really worked for her.’”

With nine years of military service under her belt, Frenchie decided to retire after “graduating” from the clinic. She returned to Ocala and used her GI Bill at the College of Central Florida, earning four associates degrees. She also applied for U.S. citizenship. Now approaching her 49th birthday on November 16, she wants to take classes at the University of Florida.

Frenchie’s bucket list includes visiting every continent in the world and each of the nation’s 50 states. Tattoos on her arms show she’s only missing Antarctica and Hawaii.

“I’m going to Hawaii on November 8 of 2022,” said Frenchie, a lilt of excitement entering her voice. “I’m planning to go to the Arizona Memorial for Veterans Day. And, I’ll be celebrating all 50 states with a big luau on November 16, my 50th birthday.”

Frenchie’s military memorabilia includes a rack of medals and a combat action badge, though she modestly shrugs off the accolades.

“I don’t think I’m a hero,” she insisted. “Those that don’t come back, those are the heroes. Those that lost a limb or their sight, those are the guys we need to say ‘thank you’ to. I was lucky. I came home. I’ve still got four limbs, ten fingers, and ten toes. I have PTSD, but I know how to deal with it better now.”