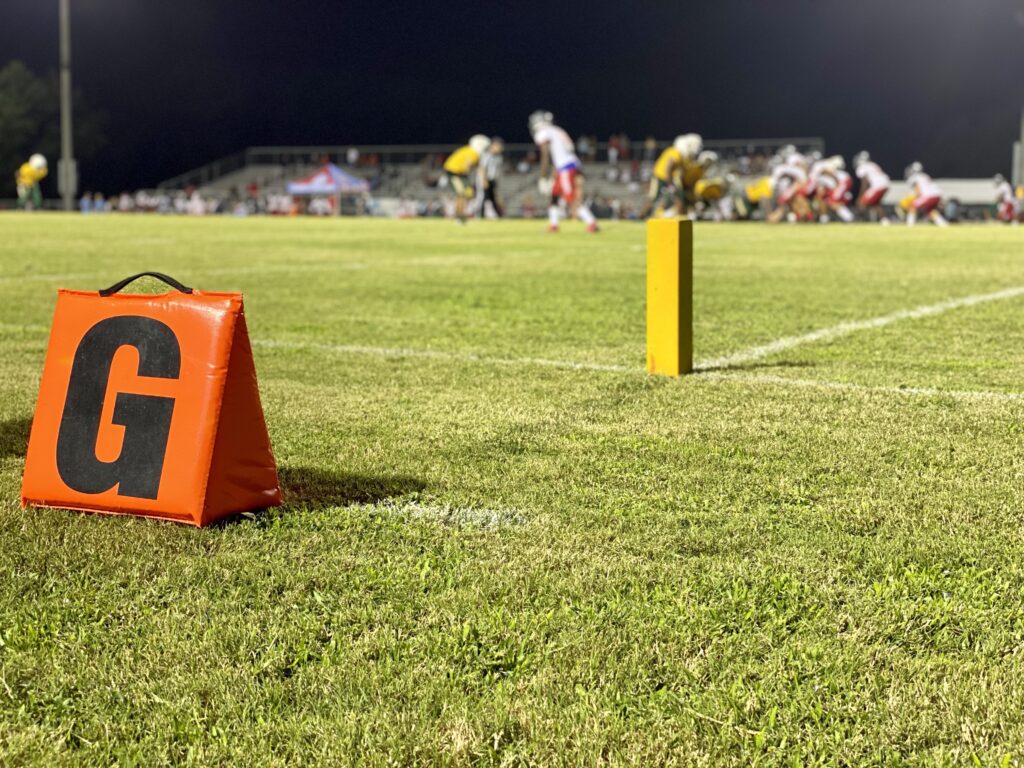 The Forest Wildcats (0-2) fell behind early and were never able to catch up, losing 43-8 to the Seabreeze Sandcrabs (1-1) on Friday night.

Midway through the first quarter, the Sancrabs were already up 22-0, courtesy of a punt return for a touchdown from LaTrae Bass, a safety from defensive end Jeremy West and a dazzling performance from the left handed quarterback Blake Boda (five touchdowns total; three passing, two rushing).

With just over four minutes to go in the first quarter, Boda—from the Wildcats 15-yard line— stepped up in the pocket, dumped off  to Jamari Hicks and Hicks did the rest, turning up field for a touchdown, making it 29-0.

On Forest’s ensuing drive, a sack on third down quelled any semblance of offense the Wildcats had going. With the ball back, Seabreeze struck again. On a quarterback draw, Boda had open grass and took advantage, hurdling a fallen Forest defender and waltzing into the endzone, putting the game out of reach at 36-0 with seconds left in the first quarter.

“We shot ourselves in the foot a couple times early and then spent a bunch of time trying to come back, so yeah it was tough,” summarized Forest coach Robin Williams.

The Wildcats looked to have found some footing as the second quarter began, thanks to running back Preston Winfrey finding nine yards on two carries, straight up the middle. But another sack stalled the drive and the Sandcrabs scored yet again on the ensuing drive.

Down 43-0, the Wildcats continued to struggle to push the ball downfield. Each potential explosive pass went just over the fingertips of the receiver. Instead they turned to screens and dump-off’s, hoping to get the ball out quickly. But the most productive drive of the night for the hometown team came when Forest took to the ground.

After a screen to Jamarrien Burt moved the chains, Williams inserted the young passer VJ Poole at quarterback. From shotgun, Poole took the snap and took off, picking up 16-yards before taking a hard hit, but by that point, well in Seacrabs territory. Williams put senior Steve Curry back under center two plays later, and a quarterback draw opened up the middle of the field for Curry to scamper 26-yards for the gain.

Now in the red zone, from the 10-yard line, Curry took the quarterback keeper through a hole and into pay dirt, for the Wildcats only touchdown of the night.

While Burt played the majority of the second half, the rotating quarterbacks for Forest are indicative of two talented guys that need to stay on the field according to Williams.

“My starting quarterback [Curry] who is a senior does a real good job for us but he’s also playing a lot of defense,” explained Williams of the quarterback/outside linebacker. “So, yeah, he plays well, actually both of them to be honest, both of them play offense and defense, so sometimes we just kind of go with the the guy that’s got the most gas at the moment.”

Speaking of the defense, a safety in the third quarter from Omarian Leslie and Preston Winfreh helped the Wildcats eat into the score, making it 43-8. It took the defense three tries and some questionable spotting, but finally the rushers were able to track down Seabreeze’s backup quarterback in the back of the endzone, spinning him down for a defensive highlight of the night.

“They showed up in some big moments,” Williams said of the defense.

He hopes their improvement from Week 1 to Week 2 is suggestive of what the team as a whole can do after returning from the bye in two weeks.

“You know we cut down on the penalties a ton this week. Last week defensive penalties really hurt us. So there was some very bright spots. Our special teams played better tonight in areas. We did give up the punt return but you know there’s definitely some spots where we’re showing some very notable improvement. But yeah, we still got a ways to go.”

The Wildcats now head into their bye week, hoping for good news on Ryan Jackson in the interim. Jackson left the game in the first half with a left knee injury. He was helped off the field by trainers and taken to the doctor from there, according to Williams.

“We’re gonna go find out. Hopefully, here real quick. [Was his] left knee, and he had a prior injury so we’re obviously very concerned,” Williams said.