For DeSantis, money flows from Alabama to Wyoming 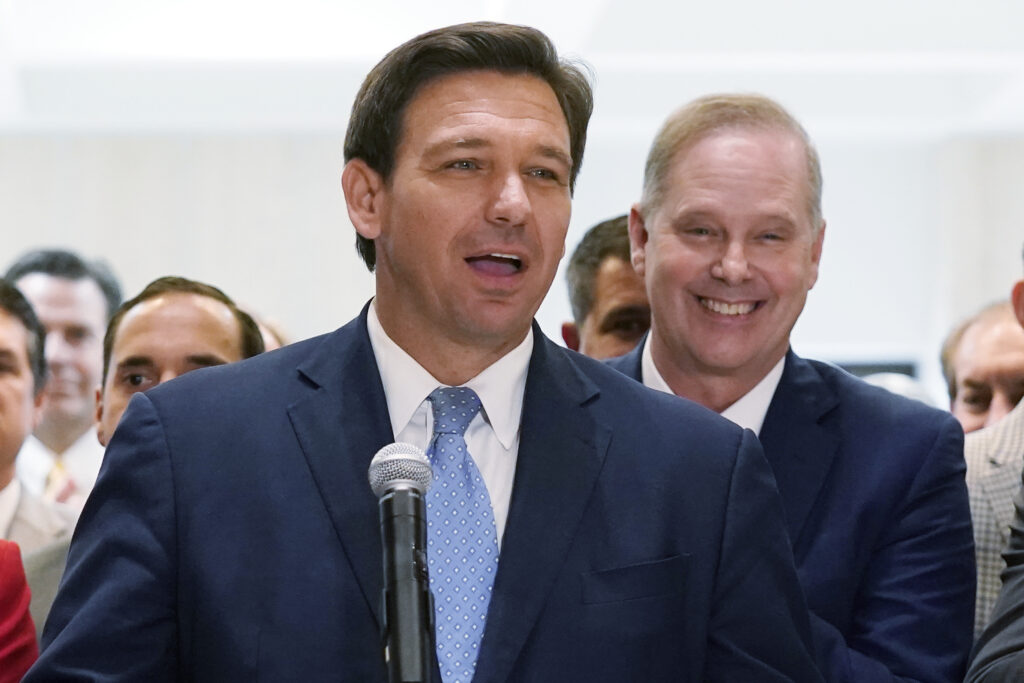 FILE – In this April 30, 2021, file photo surrounded by lawmakers, Florida Gov.Ron DeSantis speaks at the end of a legislative session at the Capitol in Tallahassee, Fla. Now that the pandemic appears to be waning and DeSantis is heading into his reelection campaign next year, he has emerged from the political uncertainty as one of the most prominent Republican governors and an early White House front-runner in 2024 among Donald Trump’s acolytes, if the former president doesn’t run again. [AP Photo/Wilfredo Lee, File]

As Gov. Ron DeSantis runs for re-election in November, he has drawn attention across the country as a potential 2024 candidate for president.

With that has come cash. Lots of cash.

In big chunks and pocket change. From Tallahassee to Honolulu.

Since the beginning of this year, DeSantis’ political committee, Friends of Ron DeSantis, has raised at least $56.2 million. Money has flowed into the committee from every state and Washington, D.C, with at least $29.2 million coming from outside Florida, according to a state campaign-finance database.

Here are some takeaways from DeSantis’ national fundraising from Jan. 1 through July 8. This only looks at contributions to the Friends of Ron DeSantis committee and does not include separate dollars landing in DeSantis’ campaign account.

— ANTEING UP: The largest amount of out-of-state cash, nearly $10,83 million, came from Nevada. A big part of that stems from a $10 million contribution that aerospace executive Robert T. Bigelow made to DeSantis’ committee on July 7. But even without Bigelow’s money, Nevada would have been one of the committee’s top sources of funds. Nevada donors made seven contributions of $50,000 or more.

— BLUE TURNS TO GREEN: DeSantis frequently tries to score points with the Republican base by criticizing Democratic-controlled states such as New York, California and Illinois. But that hasn’t stopped his committee from vacuuming up money from such blue states. New York donors trailed only Nevada and Washington, D.C. since the beginning of the year, pouring $1.565 million into the DeSantis committee. California was next at $921,219, followed by Illinois at $826,853.

— THE BELTWAY AND BIDEN: DeSantis’ committee pulled in about $9.6 million from Washington, D.C., Virginia and Maryland. Granted, that is somewhat inflated because the Washington-based Republican Governors Association pitched in $8.75 million. But donors in Virginia contributed $638,240. Also, donors in Biden’s home state of Delaware ponied up $140,264.

— FAR-FLUNG FIVE SPOTS: Every little bit helps in political campaigns. And that includes $5 contributions or other small amounts from far-flung states. The DeSantis committee received contributions totaling $40 from Maine donors; $55 from Vermont donors; $62 from Alaska donors; and $82 from West Virginia donors.