Fight or flight: Ocalan shares the bravery of Ukrainians 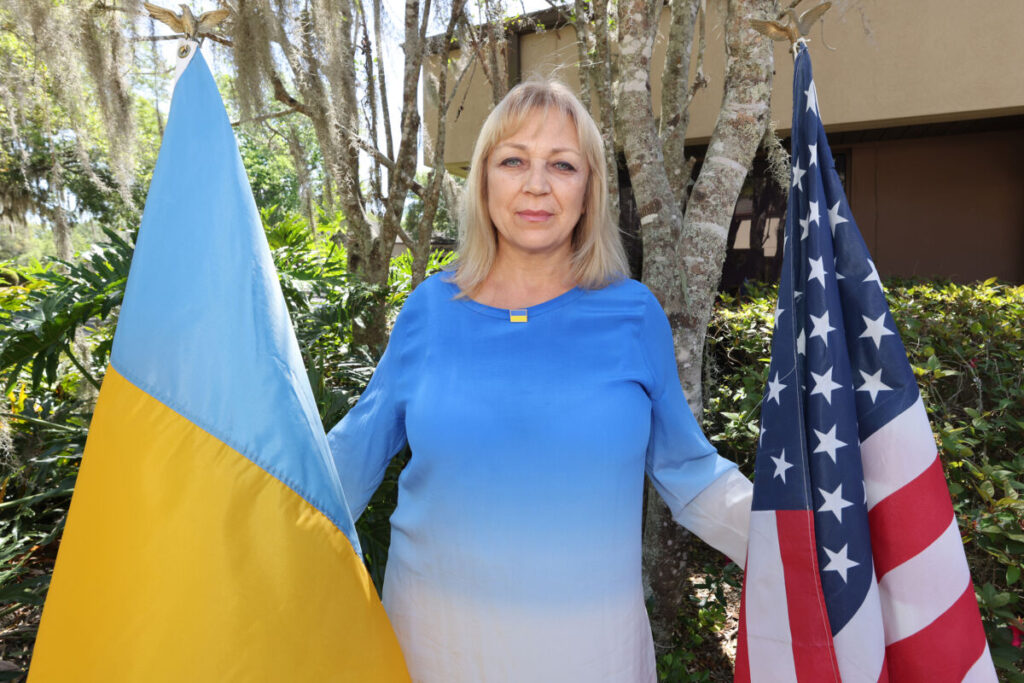 Mila Mullens poses with a Ukrainian flag and an American flag in Ocala on March 22. Mila, who is originally from Kyiv, Ukraine, moved to the United States 20 years ago and is an American citizen. [Bruce Ackerman/Ocala Gazette] 2022.

Just over 20 years ago, one Ocala woman left Ukraine to make a life in the United States. Today, she fears she may never be able to return.

Mila Mullens, 60, anxiously waits for news from her family and friends who are struggling to survive the Russian military’s onslaught in her native country. Her brother-in-law is fighting with fellow Ukrainians in the capital city of Kyiv; her mother, sister and niece have managed to escape to Poland.

One friend’s family tried to flee Kyiv, but fell victim to a Russian bomb, Mullens said. Her friend is desperately trying to contact her parents, whom she has not heard from in days. Another friend, a cardiologist, is staying in Ukraine and offering medical assistance to strangers over the phone and through whatever internet connections are available.

The ongoing nightmare, Mullens admits, is taking an emotional toll.

“In a good time, I basically just go visit,’’ she said. “I cannot live there anymore. My whole life is here, but my heart [is] crying for Ukraine.”

The last time Mullens spoke to her brother-in-law, she said, he only feared for the safety of his family and not for himself. He stayed in Kyiv after sending his family to safety. Her mother, sister and niece made their way to the Ukrainian city of Irpin, then on to a hotel near the Baltic Sea, where the owner allowed them to stay for free.

“They are very safe now. My brave sister managed to drive through [all of] Poland. They are now [in] northwest Poland,” she explained.

Her mother, an 83-year-old, has faced significant deterioration of her health in recent months as the crisis in Ukraine has escalated.

“My sister said she became like a child,” Mullens said. “Her blood sugar [is] very high now, higher than usual.”

When Mullens last spoke by phone with her brother-in-law, he said many places in and around Kyiv have not had food, water or electricity for many days. The smallest towns have suffered the most, she said, because the suburban areas outside of Kyiv are the only thing standing between the Russian military and the capital.

“These little towns have some houses, like residential one-story houses, but they have a lot of apartment high-rises. It’s all gone, all gone,’’ she said. “But people [are] still standing.”

Mullens counts her brother-in-law among the brave Ukrainians fighting for their country.

“I cannot imagine if he is shaken, if he is in such a state of mind,” she said. “He [is] not shaken for himself. He’ll stay until he [is not] alive.”

One of Mullens’ family friends, Julia, lives in Pittsburgh, but her parents still live in Ukraine, just outside of Kyiv in one of the embattled suburbs.

“On the first day of [the] war, her dad and mom [were] driving to a grocery store, and a helicopter dropped some kind of bomb very low on this little town [with] no military base, nothing,” Mullens said. “Her mom got piece of bomb in her head, and they had no chance [to] take her to a hospital.”

According to Mullens, Julia’s father had to climb to the roof of their two-story home to get enough cellphone service to call his daughter and give her updates on her mother’s condition.

Julia’s parents attempted to flee Kyiv by car several days ago, but they have not been heard from since, Mullens said. Their photos are being shared on Facebook to try to find them and get them to safety.

Ukrainians are largely unable to receive medical care at hospitals because of near-constant bombardments. Another of Mullens’ friends, Lida, has been trying to fill the void by giving out medical advice over the phone and internet to those who are sick or injured. Lida, a cardiologist in Kyiv, stayed in Ukraine because she doesn’t want to leave her family behind, Mullens said.

“Lida posted on Facebook: ‘Doesn’t matter if you know me or not, I can give advice on any kind of medical advice, not only cardiology. Just contact me,’” Mullens said.

Lida, she said, has helped many people with a variety of medical emergencies, sometimes telling them how to create solutions with items they have on hand.

Mullens and her husband, Everett, have no choice but to constantly watch the news from their home in Ocala and wait by the phone to hear from their friends and relatives. Everett Mullens, 72, said he wishes the United States would provide more support for Ukraine.

“Ukraine does all the fighting themselves; they should at least get planes and weapons to protect themselves,” he said.

He said that from an American perspective, a lot of people don’t understand what’s going on overseas. Many people don’t care, he said, unless they have a direct tie to Ukraine or Russia.

“A lot of people don’t understand why we should care,” he said. “Everybody should care when they’re killing innocent people.”

Everett Mullens, who breeds and races thoroughbred horses on a farm in Ocala, has visited Ukraine many times with his wife. They still own property there, but they now feel uncertain about the fate of Ukraine.

“I’m worried now [that the] beautiful city of Kyiv doesn’t look at all like it used to before,” Mila Mullens said. “It’s all destroyed now.”

Mullens has put her faith in the citizens of Ukraine, who have stood up to fight. She trusts them to defend the country she holds dear, although it may take a while.

“Everybody is talking, saying we will win this war,” she said. “Nobody just knows when.”

While Mullens can only hope to return to Ukraine one day, she said she is strong in her identity and proud of where she comes from.

“I am sitting on two chairs: I am Ukrainian, but I am American,” she said.