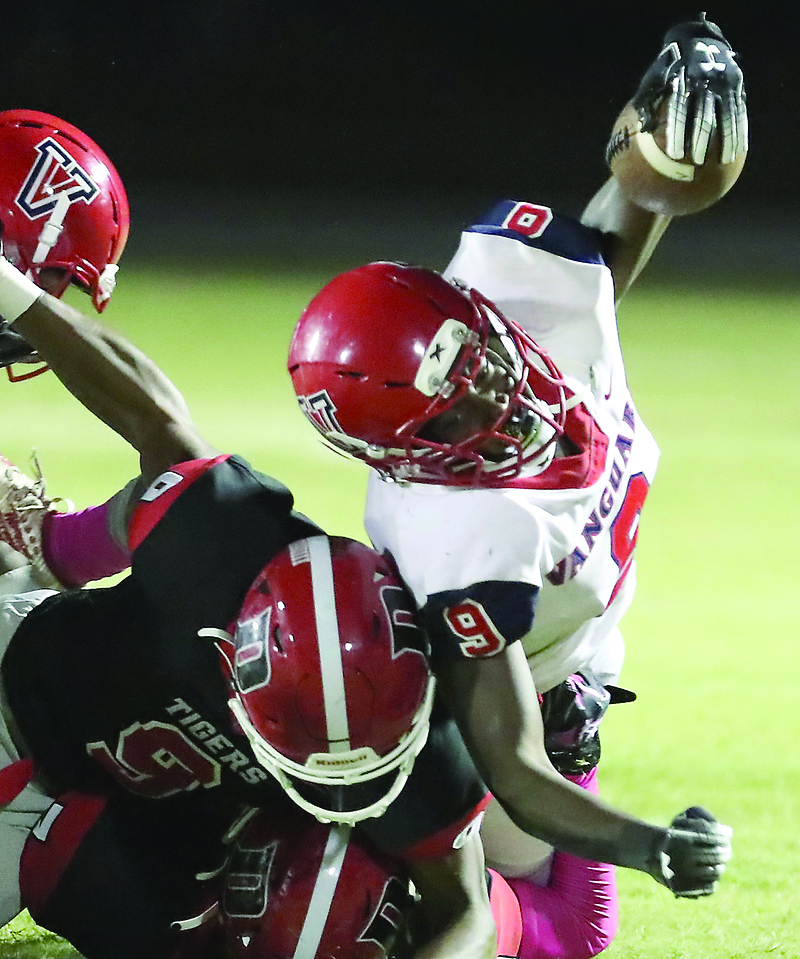 Vanguard’s Dewhitt Betterson (9) battles for extra yardage as he is stopped by Dunnellon defenders during a football game at Dunnellon High School. 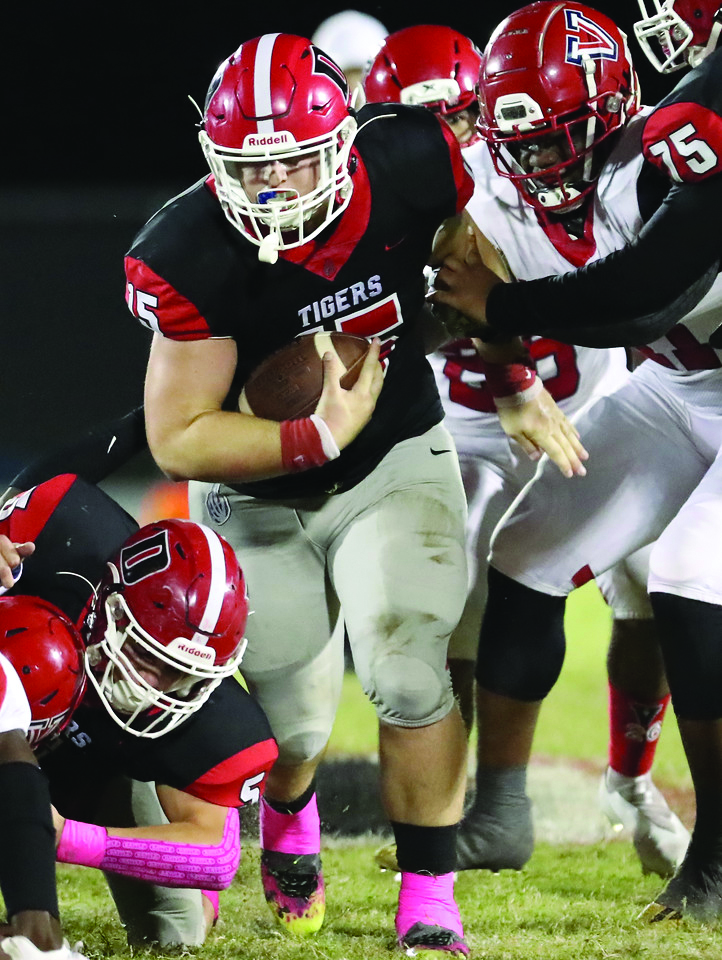 Dunnellon’s Trent Townsend (15) powers through Vanguard defenders on a quarterback keeper during a football game at Dunnellon High School.

As the frontrunners in the county clashed, only one could remain undefeated, and Dunnellon fought to the end to make sure they were that team. Final score: Dunnellon 30, Vanguard 28.

In another close one, in the battle for the third and fourth positions in the county, Forest and West Port went head to head.

Meanwhile, North Marion finally put a W on the board with a sizeable win over Lake Weir, 46-6.

Here is a look at last week’s action.

In this battle of the unbeatens, Vanguard roared out to a two-touchdown lead but couldn’t hold on and dropped a close one, 30-28, to Dunnellon at Tiger stadium last week.

The win vaulted undefeated Dunnellon (4-0) to a No. 26 ranking in Florida.

Entering the second quarter, Vanguard was up 14-3, but Dunnellon’s defense came up big with an interception by Jermain Fashaw, which he returned for six, followed by a successful two-point conversion.

Vanguard put the next seven on the board, bringing the score to 21-11 in the third quarter.   Dunnellon, feeling the pressure to get their offense going, took a chance that paid off with a 37-yard completion by Trent Townsend to Shai’hem Thomas.  Then, with a new set of downs, Christian Fashaw took an end around handoff from Townsend, skirted past Vanguard tacklers and put 6 on the board with a 20-yard run.

With only one quarter remaining and Vanguard on top 21-17, Townsend went deep again and connected with a receiver for a 53-yard completion. 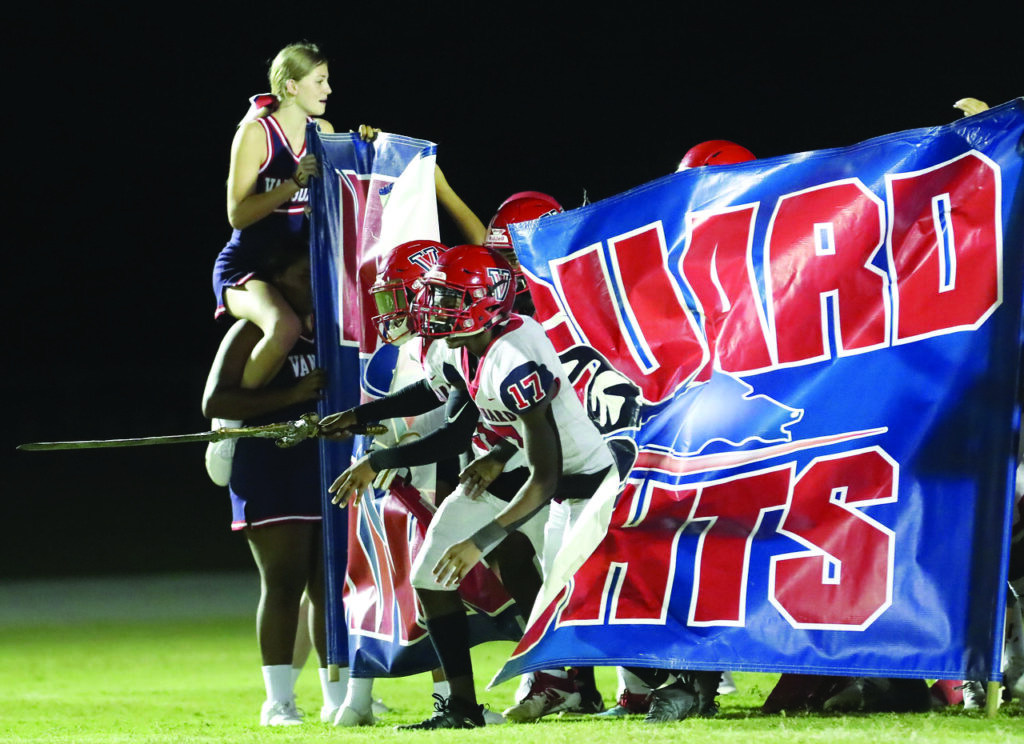 The Vanguard Knights burst through their banner as they run onto the field to face Dunnellon during a football game at Dunnellon High School.

In the end Dunnellon’s never-give-up attitude paid off with a hard-fought victory. While Vanguard definitely gave them a run for their money, in the end, Dunnellon’s offense was just too much to handle.

Townsend led the charge for Dunnellon with nine completions for a total of 171 yards, with his leading receivers being C. Fashaw (55 yards) and Thomas (54 yards).  Brody Luckey led the ground assault with 72 yards rushing.

On the other side of the ball, Dunnellon’s defense was put to the test by the Knights, who had 356 total yards on the night, but the Tigers dug their heels in with a total of 69 tackles.  Sam Wryals and J. Fashaw led the way with four solo tackles and four assists apiece.

With Forest up 13-6 in the fourth quarter and threatening to close out the game with another score, West Port came up with a huge defensive stop, then pulled even to send the game into overtime last Friday night. 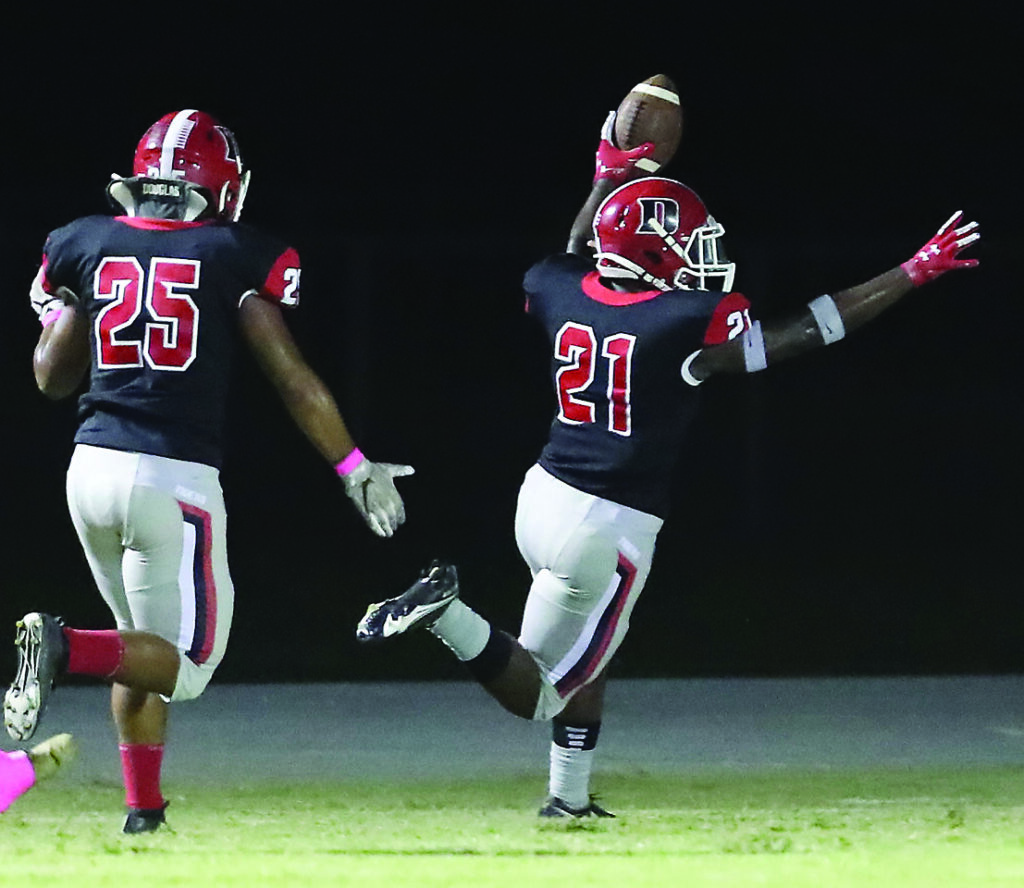 Dunnellon’s Jermain Fashaw (21) runs the ball in for a touchdown against Vanguard during a football game at Dunnellon High School.

Forest’s Antonio Crim, with one more chance to put points on the board, was dropped by West Port’s Israel Chisolm to seal the win for the Wolfpack

Elijah Hopkins led the way again for West Port with 22 carries for 156 yards and one touchdown.

“I am ecstatic with the guys’ effort throughout this entire season. I’m not sure the last time West Port was 4-1,” said head coach Steve Rehm. “We will use our bye week to get healthy and prepare for a talented Dunnellon team.”

West Port improved to 4-1 on the season, while Forest dropped to 2-2.

North Marion, which came into the season with high rankings and lofty expectations, finally got in the win column, and in extreme fashion, with a 46-6 thrashing of Lake Weir.

North Marion running back Antonio Crim led the way with 198 yards and two touchdowns and the Colts’ defense allowed Lake Weir to score only six total points on the night.

The schedule doesn’t get any easier for Forest, which has to recover from a tough overtime loss to West Port and take on the goliath Dunnellon, who remains undefeated.

Vanguard, which narrowly lost to Dunnellon on the Tigers’ home field, takes on the Lake Weir Hurricanes, whose sole victory is over Belleview.

North Marion looks to put another win on the board as they face winless Belleview. The Belleview Rattlers, coming off a bye week, hope to strike a victory. However, with a current record of 0-4 and North Marion having trounced Lake Weir, who bettered Belleview earlier in the season, the odds are not in their favor.

The West Port Wolfpack has a bye this week as they prepare to take on the dominant Dunnellon Tigers in Week 7.

Vanguard’s Dewhitt Betterson (9) battles for extra yardage as he is stopped by Dunnellon defenders during a football game at Dunnellon High School.

Trinity Catholic never trailed in this game and rode a strong defensive effort to a 20-7 win over Victory Christian Academy last Friday night.

The game started slowly, with each team turning the ball over on downs.  Victory had an opportunity to score in the second quarter after intercepting a TC pass, but the Celtics defense stopped them.

Trinity was able to move the ball on offense and found themselves in field goal range, and successfully put the first three points on the board.

OCA suffered another loss at the hands of Faith Christian, dropping their record to 1-6 on the season.

The Crusaders take on Cedar Creek Christian on at 7 p.m. on Friday. As Cedar Creek has a current record of 2-5, OCA should be able to dig deep and come away with a win.