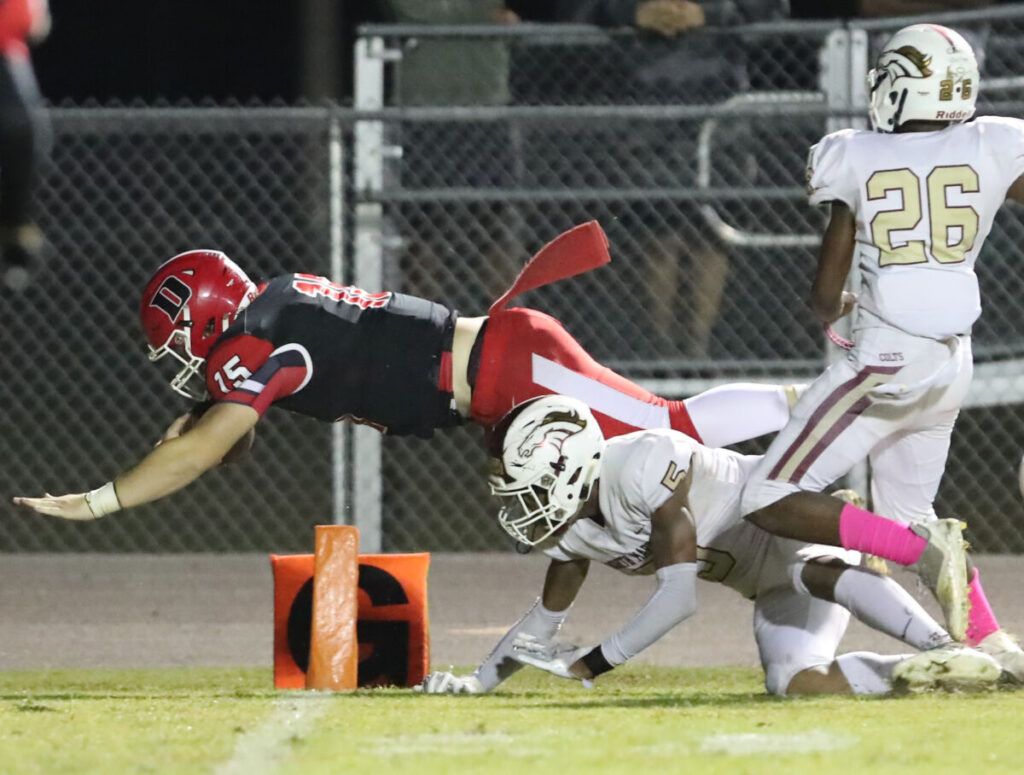 Dunnellon’s quarterback Trent Townsend (15) dives over the goal line past North Marion defenders Jeriahmiah Mack (5) and Eric Davis (26) during a football game at Dunnellon High School in Dunnellon, Fla. on Friday, Oct. 8, 2021. The touchdown was called back because of a penalty. [Bruce Ackerman/Ocala Gazette] 2021. 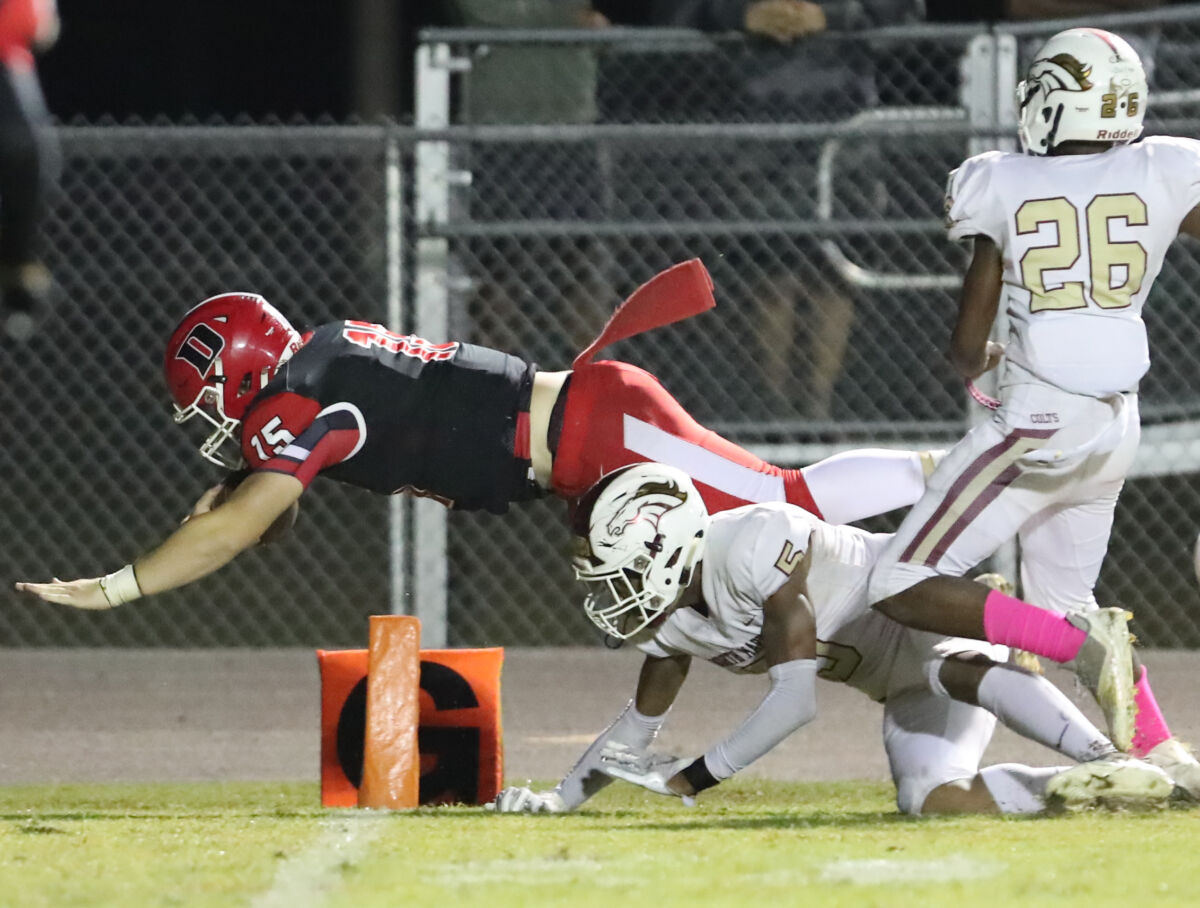 Dunnellon’s quarterback Trent Townsend (15) dives over the goal line past North Marion defenders Jeriahmiah Mack (5) and Eric Davis (26) during a football game at Dunnellon High School on Oct. 8. The touchdown was called back because of a penalty. [Bruce Ackerman/Ocala Gazette]

On a dark and steamy Homecoming Friday night, the Dunnellon Tigers successfully defended their home turf against the visiting North Marion Colts, and it was a doozy of a non-district football game.

Taking its first lead late in the fourth quarter, Dunnellon held on to win the prep contest 12-9 at Tiger Stadium on Oct. 8.

The Tigers bettered their record to 4-2 on the season—stretching their winning streak to four games—while the Colts dropped to 3-3 overall.

Dunnellon head coach Price Harris said he is starting to see from his Tiger team what he’s been looking for all season: a talented group of boys finally buying into what they can accomplish together.

North Marion opened the first quarter of play by possessing the ball for almost eight full minutes, resulting in the first points of the game before Dunnellon had even touched the ball.

Placekicker Justin Stopford kicked a 20-yard field goal at 3:43 of the first quarter, putting the Colts up 3-0.

Quarterback Trent Townsend would nearly put his Tigers team ahead with 56 seconds left in the second quarter, but the flea-flicker play—which had teammate LJ Fitzpatrick passing the ball to a suddenly wide-open Townsend, who caught the ball, turned and dived with it into the end zone—would ultimately be called back due to illegal procedure against Dunnellon.

North Marion would carry its field-goal lead into halftime.

The third quarter would start with two back-to-back fumbles by the Tigers.

Dunnellon’s defense would stop the North Marion drive on its first turnover, but failed to do so on the second turnover.

Stopford would once again get the call and put the ball through the uprights from 15 yards out, making it 6-0 Colts at 6:48 of the third quarter.

Townsend handed the ball to Jaden Dyer for the 10-yard rush touchdown at 2:36 of the third quarter.

With a chance to take its first lead, Dunnellon’s Brody Luckey attempted the extra point but kicked it wide left, keeping the score locked at 6 heading into the final 12 minutes of play.

At 4:27 of the fourth quarter, Stopford kicked another field goal to put his Colts team back in the lead, 9-6.

The ensuing kickoff went straight into the waiting arms of Dunnellon’s Fitzpatrick, who took the ball 95 yards to the house, giving the Tigers their first lead of the game, and all they needed for the win—even after Townsend failed to connect with Dyer for the two-point conversion.

Fitzpatrick even had the game-sealing interception on defense, snagging one of AJ Cussins’ errant passes with 57 seconds left on the clock.

“He’s special,” said Harris of his senior, adding that most players couldn’t score a game-winning touchdown that way. “But he did. He was able to turn something into a big play. I’m super proud of my guys tonight. They battled back and never gave up. Even after going down early and playing from behind most of the game.”

“It sucks when it goes down that way,” said Carr. “We lost focus and it cost us. It’s a big upset…but at the same time we played hard. Somebody had to lose this game. It just happened to be us.”

Carr said he doesn’t want his team to hang their heads too low over Friday night’s loss.

“We got to focus in. Don’t let games like this beat us twice,” he said.

North Marion is next scheduled to play Palatka away on Oct. 15. Dunnellon hits the road as well, traveling on Oct. 15 for a district match-up against Lake Weir. Kickoff for both games is set for 7 p.m.