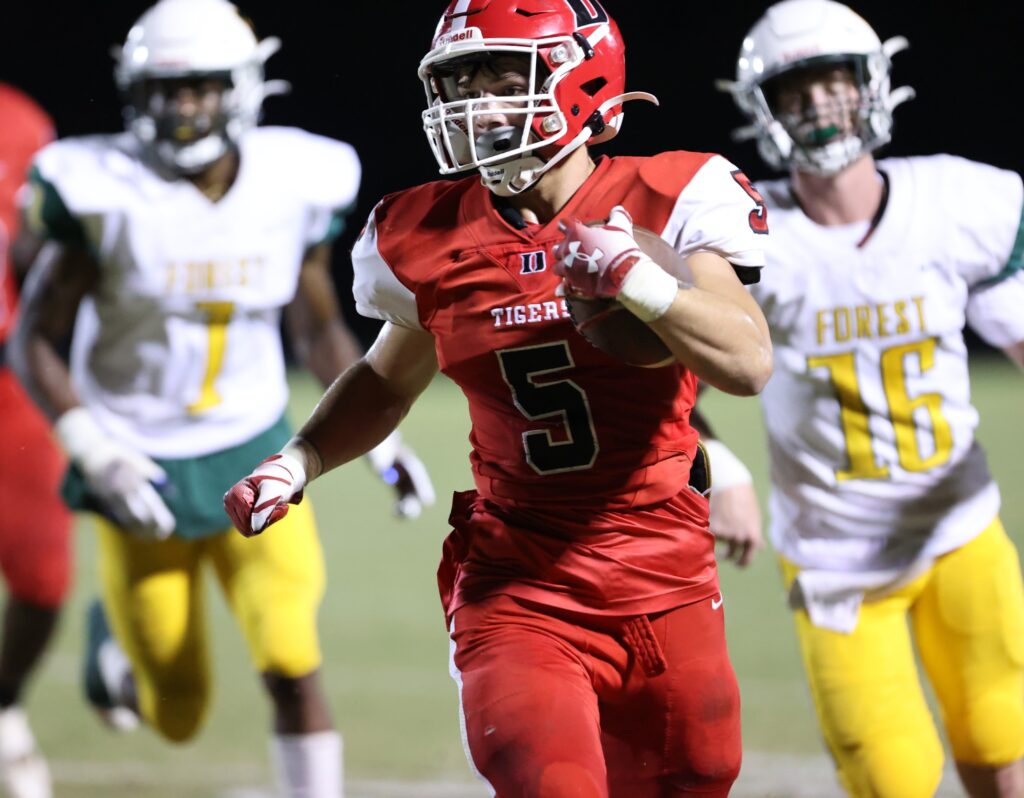 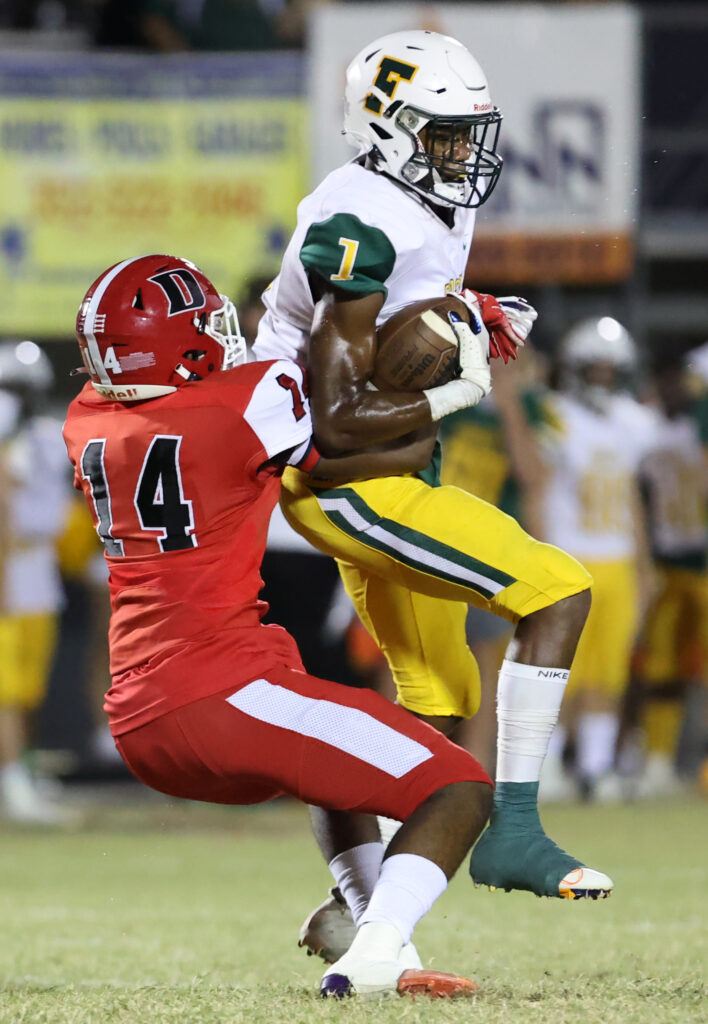 DUNNELLON—The Dunnellon Tigers dominated both sides of the football on Sept. 24 against the visiting Forest Wildcats to post a convincing 20-0 win at Ned Love Field.
Dunnellon’s overall record moves to 2-2, while Forest settles for a 1-3 record.
Head Coach Price Harris was happy to see his Tigers adjusting to new challenges. The Tigers have won their second game in a row after defeating the Crystal River Pirates on Sept. 17.
“We’re growing and getting better each and every week,” said Harris. “We’ve got a lot of very talented guys who are starting to get some experience now. I get frustrated, but to see new guys making plays is huge, and I’m proud of what they’re doing.”
Late in the first quarter, the Tigers would block a Wildcat field goal, taking a sizeable amount of momentum into the second quarter—and enviable field position.
After earning a first down in the red zone on a quarterback keeper, Dunnellon quarterback Trent Townsend again kept it himself to punch it through the defensive line from the three-yard line for the touchdown.
Missing the two-point conversion, the Tigers led the game at the 9:19 mark of the second quarter, 6-0.
Forest would drive the ball down the field on its next possession, but the Dunnellon defense was formidable, stuffing the Wildcats in the red zone until they turned the ball over on downs.
Thanks to a stout defense, Dunnellon would carry its six-point lead into halftime.
Forest quarterback Nathan Gibboney would throw an interception to Dunnellon’s Arrieon High at the 10:58 mark of the third quarter.
Just more than a minute later, LJ Fitzpatrick would take the handoff from the 20-yard line and score the Tigers’ second touchdown. Brody Luckey punched in the two-point conversion to make it 14-0.
Dunnellon would nab another errant Gibboney pass before the end of the third quarter. Fitzpatrick would score another rushing touchdown after the turnover to make it 20-0.
The Wildcats would put points on the board late in the fourth quarter, but Dunnellon’s defensive front once again stopped them near the 20-yard line, forcing Forest to turn the ball over on downs.
Dunnellon was able to milk the clock and earn the shutout.
Harris said every Friday night is a chance to improve.
“I’m just proud of them,” he said. “It’s hard to win. To get ‘W’s is a hard thing, and for these guys to fight and figure it out—with so many guys inexperienced—it’s huge, and I’m really proud of them.”

“It’s always a good thing to take a road trip early in the year,” said Harris. “Especially when you expect to be in the playoffs later on. To go and do that in the season and play a quality opponent like Madison is something we always like to do. And they’re a great program to play.”

Forest also hits the road on Oct. 1 to play Chiles at 7 p.m.