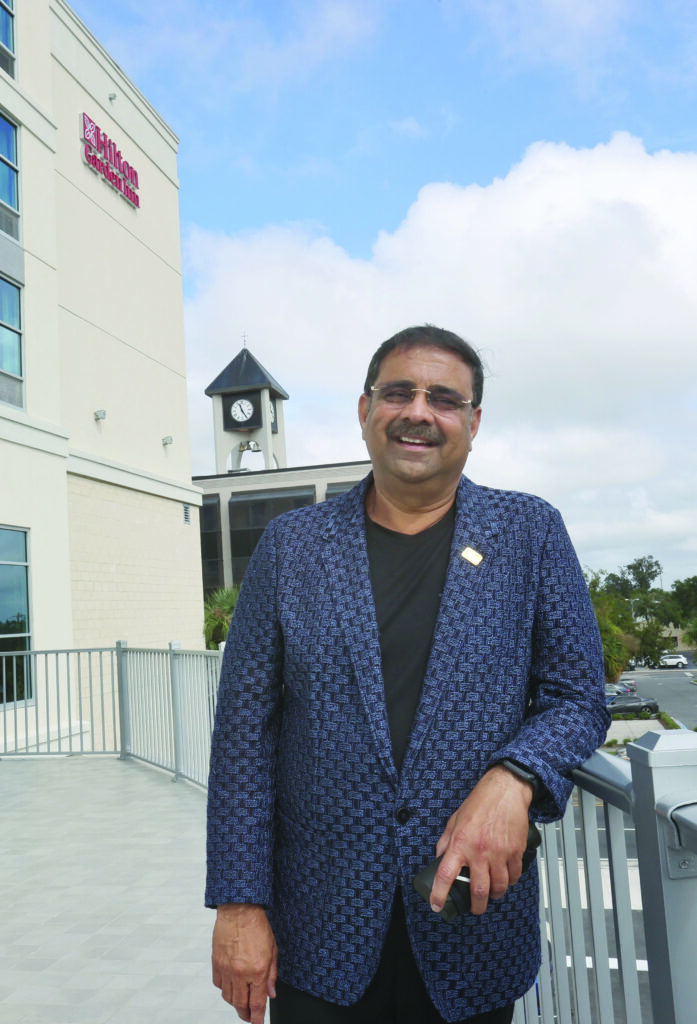 Danny Gaekwad poses for a photo at his new hotel, a Hilton Garden Inn, on the Ocala Downtown Square in Ocala.

Danny Gaekwad poses for a photo at his new hotel, a Hilton Garden Inn, on the Ocala Downtown Square in Ocala.

Developer Danny Gaekwad says his new hotel on the downtown Ocala square is scheduled to open on Oct. 19, and he believes it will be a transformative centerpiece for the city that could draw more than 50,000 thousand new visitors to the downtown every year.

“You get one chance in a lifetime to build a downtown, so you build it,” Gaekwad said during a tour of the new hotel this week.

Gaekwad said the five-story Hilton Garden Inn Hotel, located on the east side of the downtown square, will be more than a hotel. In addition to being a place for out-of-towners to stay, he envisions it also being a gathering place for local residents.

In addition to its 107 hotel rooms, Gaekwad said the ground floor will have a high-end food hall serving a variety of food and drink, from coffee to tacos to beer. He also plans to open a standalone restaurant on the ground floor.

The expansive lobby will be located on the second floor, along with a full-service kitchen and a “marketplace” that sells drinks and snacks. Gaekwad said the reason the lobby is on the second floor is because, after visiting 30 cities with downtown hotels, he concluded downtown hotels typically do not have ground-floor lobbies, leaving that space instead for food and shopping outlets.

The centerpiece of the hotel will be a huge, second-floor open terrace just off the lobby overlooking the downtown square. With more than 6,000 square feet of space and a 193-inch big screen TV, Gaekwad gets excited talking about the terrace and its possibilities as a gathering space where people can “feel connected and see people.”

“You can stand here and wave to people you know on the street below,” he said, as he overlooked downtown from the terrace.

Gaekwad said the terrace will be a place where customers can enjoy a morning breakfast or brunch, then gather at night for drinks and entertainment. Moreover, the big-screen TV will be visible from the square. There are also large and small meeting rooms, as well as a workout room. 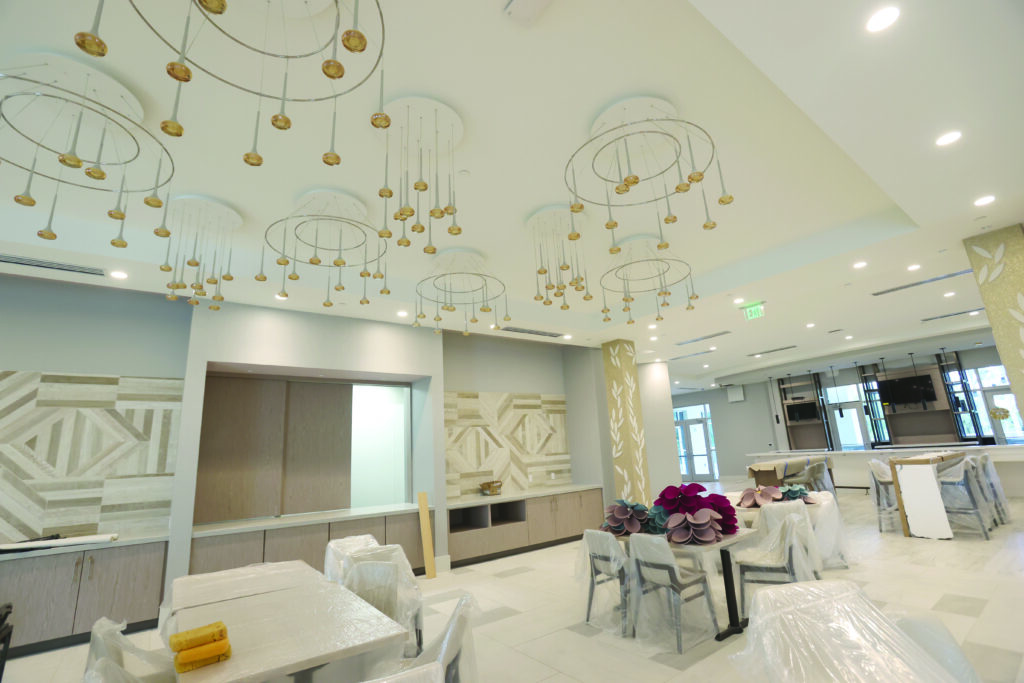 The interior of the new Hilton Garden Inn is shown on the Ocala Downtown Square.

Gaekwad said he sees himself, in this instance, not as a hotel developer but a downtown developer. He said if he has 70 percent occupancy, with two people per room, that will mean some 54,000 visitors to the downtown annually. That, he believes, will be a game-changer for downtown.

“These people will stay here and enjoy downtown,” he said. “This is a true partnership (with the rest of downtown). I am a downtown developer.”

His hope is that the hotel will not only bring more eating and drinking establishments to the downtown – “If downtown doesn’t have 30 eating outlets, it will never be a destination” – but that it will create a “downtown experience” that people will return time and again to enjoy.

“If we fail to sell the downtown experience, then they will never come back,” he said.

The project, which was initially price-tagged at $20 million when it started in 2018, will be transformative for the downtown, said Ty Chighizola, the city’s growth management director.

“I think it’s huge for a downtown,” Chighizola said. 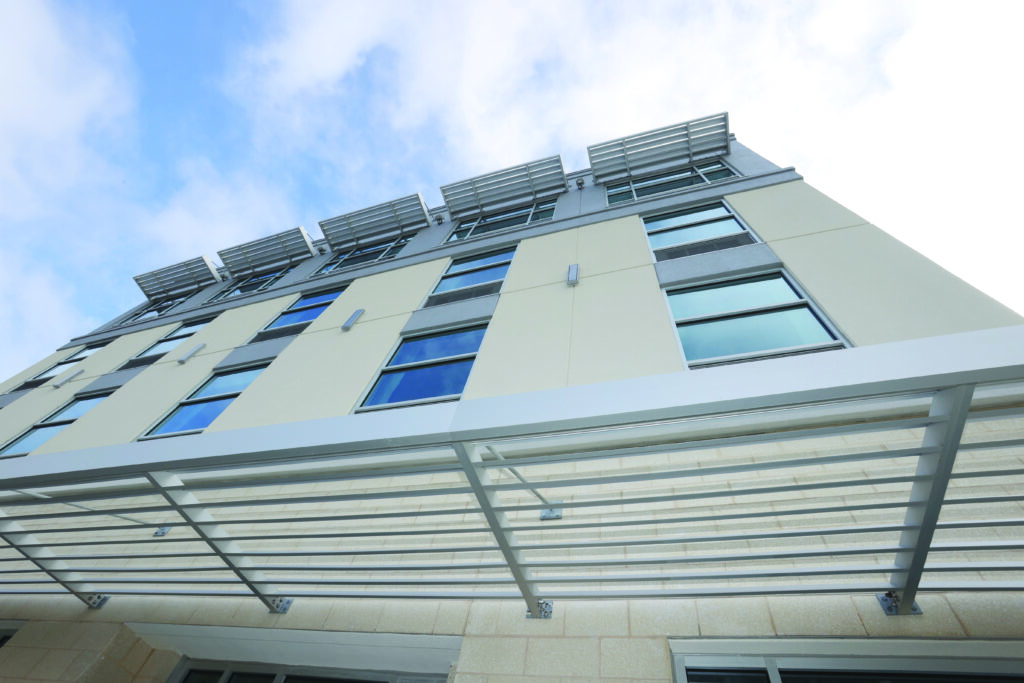 The new Hilton Garden Inn is shown on the Ocala Downtown Square.

Chighizola said it gives Ocala a hotel in an urban setting that offers patrons things to do, as opposed to those along, say, State Road 200, where most establishments are disconnected and standalone.

“It’s nice to have that urban hotel feel where people can walk to do things,” he said. “It’s more of an experience than a stay in a hotel.

“From our standpoint it is going to be great.”

Chighizola agrees with Gaekwad that the hotel should spur other new development in the downtown. Being a major national brand, Hilton, gives the city a boost as other national companies look to expand into the Ocala area.

“There’s just a lot of opportunities with a hotel as a core,” he said. “Having that national brand gives us credibility in our downtown.”

Chighizola said a project the size of the downtown Hilton also serves as “a good bridge” to other downtown development, including new residential development and the city’s plan to create a new entertainment district north of Silver Springs Boulevard, in what the city calls “midtown.”

Gaekwad said while the hotel is opening on the 19th, it will be a “soft” opening because of the limitations caused by the COVID-19 pandemic.