There are photos going around social media of “Trump DeSantis ‘24” t-shirts, and the idea of Gov. Ron in Washington sounds more and more credible every day. The 42-year-old Jacksonville native has risen rapidly from “the other guy besides Adam Putnam” to “possible conductor of the Trump Train.” He’s navigated the pandemic a lot better than many other governors of either party, smartly fighting to keep schools open (and sports on the field). He’s got a perfect backstory – Navy, college baseball, Harvard, adorable family – and he’s also got enough of an edge to combat the media at every turn. A 60 Minutes story on his relationship with Publix bounced right off him, and the kingmakers at FOX News seem to love him. DeSantis is all too happy to take on the haters. He’s prickly and proud. 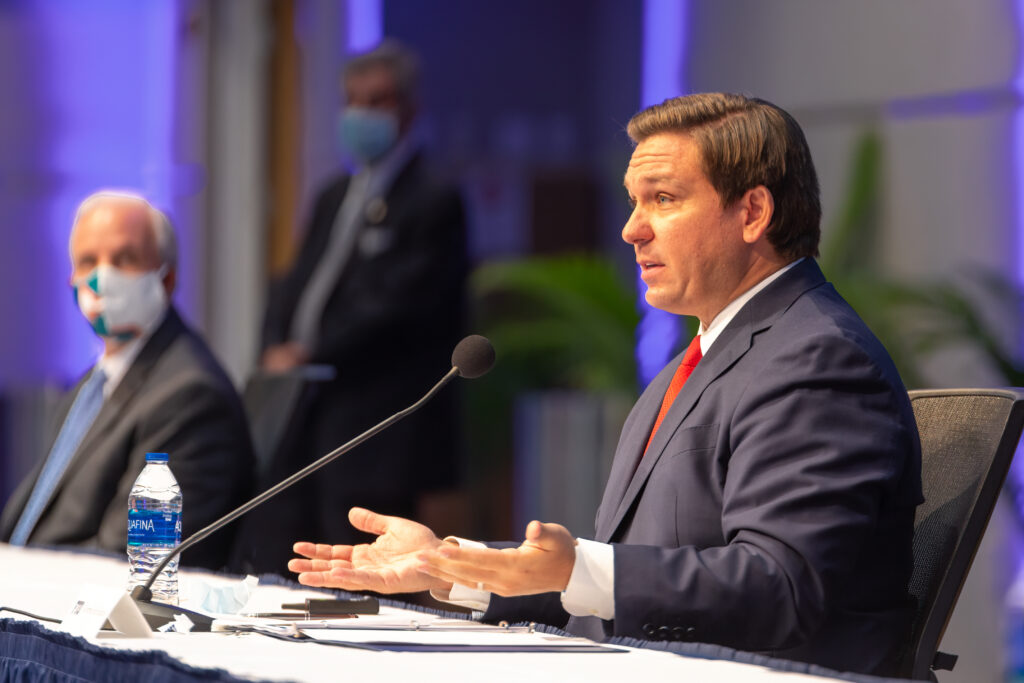 So what should his ardent Florida fans worry about? It won’t be Trump himself. If the former president runs again in 2024, DeSantis would indeed fit nicely as a running mate. If Trump remains at Mar-A-Lago, it’s easy to imagine him backing someone who remained so loyal during the Russia investigation. Gov. DeSantis is no RINO.

He just isn’t a traditional conservative.

And that may be an issue.

Small government is good government, but if we’re being honest, the modern GOP doesn’t always walk that walk. The deficit exploded under Mr. Trump’s watch – rising by nearly $7.8 trillion. Federal spending jumped more in his four years than it did in Barack Obama’s eight. Trump’s tariff attack on China, while well-intentioned, ended up hurting quite a few farmers here at home. And, generally, he tended to elbow his way into everything. His famous walk to the Washington D.C. church delighted his followers, but it hurt his polling. Pretty much every devoted Republican loves Trump, but not everybody loved the constant talking and tweeting.

DeSantis is also beginning to get involved where he’s not needed. Example: Election integrity does not have to be a hot-button issue here in Florida, where the governor himself called November’s red wave election “the most transparent and efficient anywhere in the country.” Yet the governor still went ahead and signed an election integrity law to “stay ahead of the curve,” and it’s been immediately met by legal blowback. Similar moves in Virginia have already caused confusion among GOP voters. Why fix a non-existent problem in our state, and perhaps rankle elderly voters he’s consistently put first?

Then there’s the transgender bill, meant to protect girls’ sports. Is there even a single example of a trans youth taking a spot on a varsity girls’ team in Florida, let alone beating out someone for a college scholarship? This is simply not a crisis here. But now, because of this, the Democrats will harp on Florida Republicans for marginalizing already vulnerable kids. There’s also the threat of the NCAA pulling tournaments (and money) out of the state. DeSantis need only look to North Carolina to see what happens when a transgender law captivates the liberal media: lost revenue and lost elections. Is this really a battle worth waging now?

COVID is a winning issue for DeSantis, but even there the governor has overstepped at times. He mandated a form for “extremely vulnerable” Floridians in search of the vaccine, proving they had a legitimate reason for lining up at the state’s sites. That bit of bureaucracy caused confusion and consternation: Why isn’t my doctor’s note good enough for the governor? And then there’s DeSantis’ executive order against mask mandates, which brought another round of confusion. His own Dept. of Education had to clarify that schools were exempt from the order.

Look, we are all sick of the masks – a lot of us hated them from the start – but plenty of line cooks and restaurant workers suffered during this pandemic, and feel safer with them for now. More than a few struggling restaurants might lose customers if masks are vetoed now.

Lastly, Gov. DeSantis signed a bill forbidding businesses to demand proof of a vaccine. Only days later, the CEO of Royal Caribbean Cruise Line told investors “we can operate from the Caribbean for ships that otherwise would’ve gone to Florida.” Just last year, Miami-Dade County finished a $263 million terminal for Norwegian. So that’s another cudgel for the Dems to use. Why not let the post-pandemic economy do its work? Why can’t it be My Business My Choice?

While it’s always nice to “own the libs,” some of DeSantis’ decisions only serve to make him look more meddlesome. Indeed, a lot of GOP candidates these days insist on poking the progressive hornet’s nest even when it drives independents closer to what they perceive is a center-left candidate. That’s a risk next year, as DeSantis’ likely opponents in his reelection bid are a former Republican (Charlie Crist) and a former cop (Val Demings). They aren’t extremists.

In a state as diverse as Florida, where a hot button issue in Miami would barely raise an eyebrow in Ocala and vice versa, we would prefer the Governor not micromanage local government’s ability to make their way.

Gov. DeSantis has a strong record to run on, whether as an incumbent governor or something more. There are millions of Americans who don’t like the nanny state and want an effective executive to stop the madness. But DeSantis doesn’t have to stop madness that isn’t actually causing problems.

He just needs to stay out of his own way.