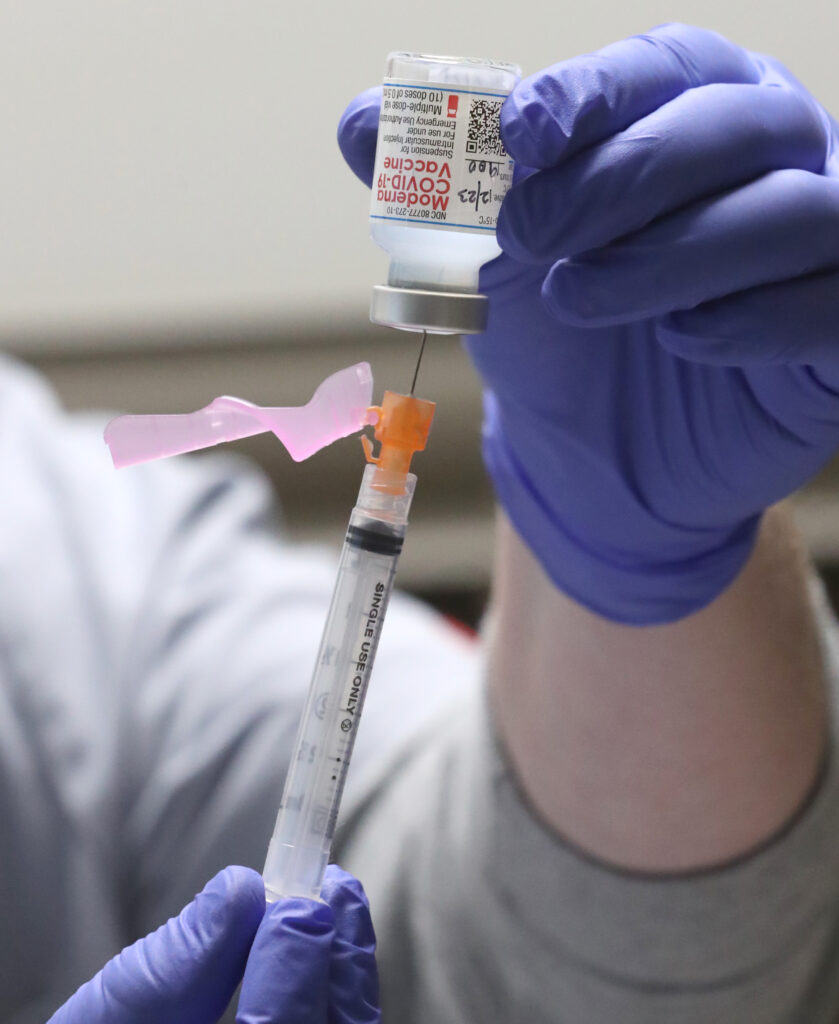 Rae Austin, of ORMC, draws a dose of the Moderna COVID-19 vaccine into a syringe on Wednesday. The hospital is vaccinating its health care workers. [Bruce Ackerman/Ocala Gazette]

The number of COVID-19 cases and hospitalizations in Marion County were up sharply last week as the area and the country continues to see an increase in cases.

For the week ending July 16, hospitalizations nearly doubled. The number of people in the area’s three hospitals rose to 61 from 33, according to numbers from the Centers for Disease Control and Prevention.

Of those hospitalized, 60 were unvaccinated. Ten of those are in COVID intensive care units, according to a local dashboard operated by Dr. David Kuhn of Trinity Clinic.

Still the number of hospitalizations is well below the peak of more than 170 in January.

Kuhn has published his dashboard, which includes local numbers reported by the Florida Department of Health (DOH) and the CDC, on his Facebook page since early in the pandemic.

The recent uptick is about half the nearly 1,500 cases reported per week locally during past surges.

Vaccination in Marion increased last week to 1,384 from less than 1,000 the week before, according to DOH reports.

The county is reporting 167,284 residents have received at least one dose of the two-dose vaccine series or the one dose Johnson & Johnson version. That is about 51% of the eligible population in Marion County. The vaccine is approved for those 12 and older. The state’s average is 59%.

Demand for vaccination has fallen steeply since April, off 80% across the state.

Dr. Shamarial Roberson, the state’s deputy health secretary, said the case increase is mostly among younger people who are less likely to be severely affected. She said more than 80% of residents 65 and over are vaccinated.

Marion County is reporting similar numbers with more than 72% of those 65 and older vaccinated. They hope to reach the 80% mark by September.

In late January, about 180 Floridians were dying per day of the disease, just below the peak of 200 per day last August. Last week, the average was about nine per day, according to the state, a 95% drop.

Overall, more than 38,000 Floridians with COVID-19 have died since the pandemic began in March 2020. The state stopped reporting county deaths in June, but the CDC reports less than 10 deaths in the county for the previous seven days ending July 15.

Gov. Ron DeSantis reiterated that even with the increasing cases, there will be no mandates requiring vaccinations, masks or social distancing. He has pushed for the state to be fully open.

Dr. Frederick Southwick, chief of the University of Florida medical school’s infectious disease division, said computer simulations show the delta strain will create “a marked surge in cases over the next three months.”

“The delta variant grows faster in human cells and can spread to others particularly in closed spaces even when wearing a mask,” he said. “The only effective way to be protected from the delta variant is to get vaccinated.”

Last week, the Marion County confirmed the first case of the delta variant in the County.

Roberson, the health department chief deputy, said the state has a “robust” outreach program to churches and rural communities pushing the message that vaccines are safe and readily available. Ultimately though, it is up to each person.

“People have the right to choose,” she said.

The Associated Press contributed to this report.