County Board to hear Rudnianyn request tomorrow on zoning change to 12.36 acres near Lake Louise

If adopted, zoning change would quadruple the allowable maximum density of units per gross acre. 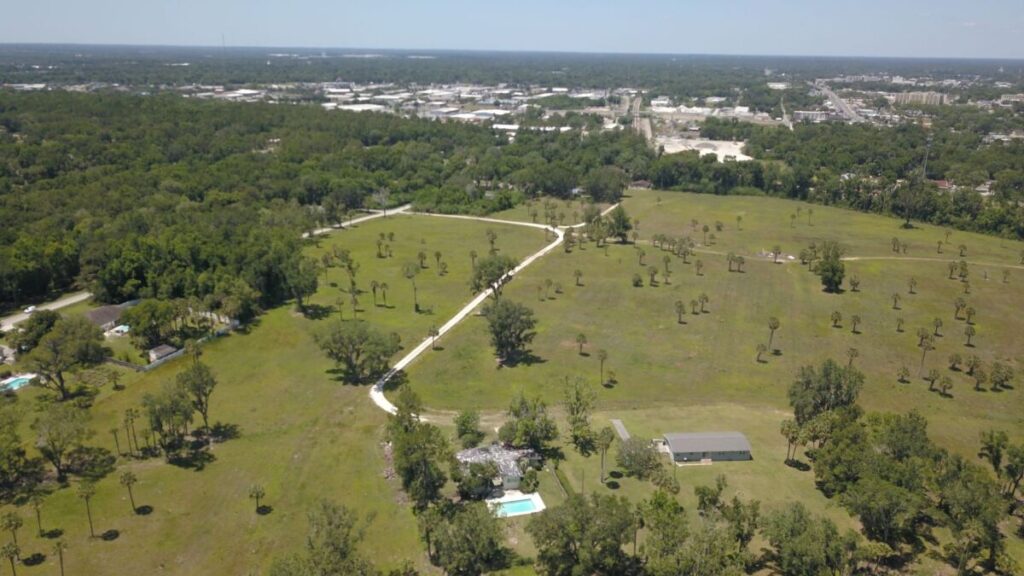 A plot of land at the intersection of Southwest 7th Ave and Southwest 32nd street is the site of a potential housing development known as Lake Louise shown on Tuesday May 10, 2022 in Ocala, Florida. The homes of the county residents in this photo will be surrounded by city zoning due to a recent annexation into city limits. The annexation increased density from four units per acre under the county code to 18 units per acre under the city code. [Alan Youngblood/Special to Ocala Style]

Developer John Rudnianyn’s request for a land use change from medium residential to urban residential for an approximate 12.36-acre portion of a 21.57-acre parcel located northwest of Lake Louise will be heard by the Marion County Board of County Commissioners on Tuesday, June 7.

The site is located approximately one-half mile west of S. Pine Avenue and .13 miles north of Southwest 32nd Street within a platted and recorded subdivision, Lake Louise Estates, bordering the City of Ocala.

Currently, school facilities serving the area of the proposed land use change are experiencing persistent localized overcrowding, according to a City of Ocala Planning & Zoning commission meeting conducted on Dec. 13, 2021. Approximately two miles south of the site is Shady Hills Elementary, currently at 87.1% capacity, according to county records. Osceola Middle, 109.6% capacity, is located roughly 1.4 miles to the north of the site. The closest high school, Belleview High School, is approximately 6 miles away and at 109.13% capacity.

This isn’t the first parcel Rudnianyn has requested to be rezoned for development near Lake Louise. The city recently agreed to allow the developer to annex an adjacent 88.73-acre parcel on Jan. 18.

Following annexation, on May 3, Ocala City Council approved two ordinances increasing zoning from four units per acre under the county’s zoning laws to 18 units per acre within the city—potentially adding a maximum amount of 1,200 units within the Lake Louise corridor.

In an open letter included with the county agenda item and dated April 25, 2022, property owners near the proposed parcel—named in the letter as Laurie Yonge, Gay Blake, Betsy Roberts and Lisa Gelfand—voiced their opposition to the change of land use and rezoning.

“It appears that the applicant and city and county officials are circumventing the existing zoning and land use law by allowing portions of the property to be annexed into the city and now attempting to change land use and rezone the balance of the property which remains in the county,” said Yonge in the letter. “The property remains a platted single-family subdivision and the plat has not been vacated…[it] has been an existing single-family platted subdivision for over 50 years and it should remain the same.”

Additionally, the letter warned that the negative impacts to neighborhood roads, overall traffic patterns, school capacity and the surrounding environment would be significant if a higher density rezoning change in the area was approved by the county.