Could North Magnolia lose its lights? 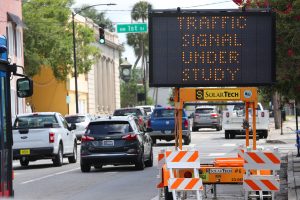 A sign is shown for a traffic signal that is under study for removal on North Magnolia Avenue near the intersection of Northwest First Street in Ocala on July 16, 2020. [Bruce Ackerman/Ocala Gazette] 2020.

Ocala city officials are studying whether to take down traffic lights along Magnolia Avenue north of Silver Springs Boulevard.

The study will run in conjunction with the repaving of Magnolia Avenue between the boulevard and Northeast Fifth Street.

That project begins Monday and runs through Oct. 17.

City spokeswoman Ashley Dobbs said the traffic-light review will be conducted by city staff and take about a week. The city’s Traffic Division will evaluate waiting times at lights, driving patterns and other information to determine if lights are still warranted for that section of downtown.

The study is similar to one the city did in May 2019 for Northeast First Avenue, which parallels Magnolia Avenue.

Meanwhile, beginning Monday, motorists will be able to use Magnolia Avenue during the repaving project, as crews will work on one lane at a time, Dobbs said.

But drivers may see delays since crews will work from 7 a.m. to 5 p.m.

For more information, contact the Capital Projects Division of the City Engineer’s office at (352) 629-8419.