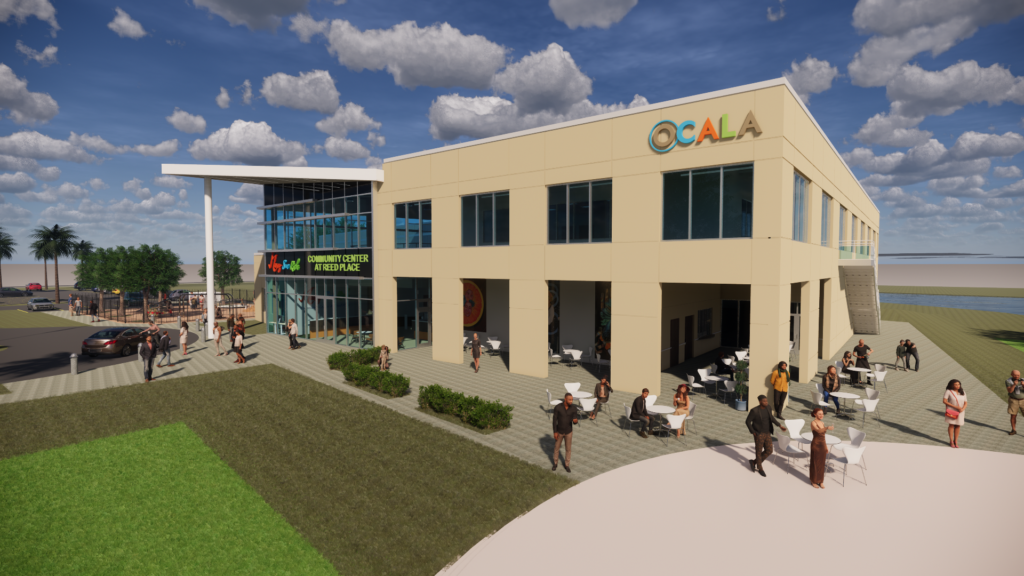 The Mary Sue Rich Community Center, depicted in this artist rendering, will feature a fitness center, walking track, basketball courts, meeting rooms, an indoor playground and more. [Courtesy of the City of Ocala]

After years of planning, the Ocala City Council voted unanimously Tuesday night to begin construction on the Mary Sue Rich Community Center, a nearly $10 million project city officials say will be a centerpiece for the revitalization of the city’s west side.

The council voted 5-0, without comment, to award the construction contract to R L Burns Inc. out of Orlando to build the 41,750-square-foot, two-story community center. It will be built on the former Royal Oak charcoal plant site, across the street from the now-closed Pine Oaks Golf Course.

City Councilman Ire Bethea said after the meting that the community center, the first true facility of its kind in the city, will be a benefit to the entire city, although it will be located on the west side.

The community center will include a health and wellness area with an open fitness area; indoor walking track; two multi-purpose studios with a partition for larger groups; a mind, body and dance studio; two full basketball courts in a gymnasium with 120-person bleachers for each court; an indoor playground that connects to one of the courts, which will be used for camps; a senior studio and multipurpose room; and a library and media center. There are also huddle rooms for tutoring and health advice.

In addition to the health and wellness areas, the center will have designated indoor spaces for senior, youth and family programs; a 400-seat banquet/event space that can be divided into three rooms; and a kitchen to serve seniors and children after school, in addition to being available for catered events.

When asked how big of a deal the community center was for west Ocala, which he represents, Bethea said, “I think it’s a big deal for the city in general. We need to spread out things that benefit the whole city. … I think, all in all, it’s going to be a great benefit to the west side as well as the whole community.” 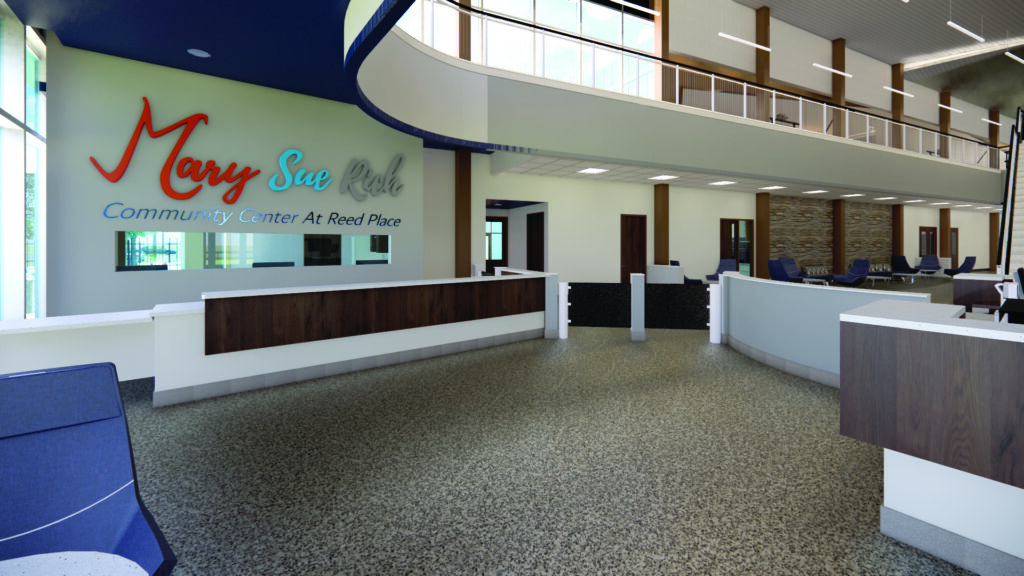 The lobby of the Mary Sue Rich Community Center is shown in this artist rendering. The 41,750-square-foot facility will be built on the site of the former Royal Oak charcoal plant in west Ocala [Courtesy of the City of Ocala]

Bethea, who used to work for the city as a recreation supervisor, said he approached former city Recreation and Parks Director Kathy Crile with the idea of a community center about eight years ago. The two of them developed a plan and convinced former City Manager John Zobler to get behind it.

The city administration figured out financing by borrowing money from the city itself that will be paid back over 10 years at 2 percent interest with Community Redevelopment Area tax revenues. It also received a $2.3 million grant from the Marion County Hospital District, with the stipulation that the district can conduct health and nutrition programs at the community center.

In addition to the Mary Sue Rich Community Center, Crile – before her retirement this summer – said the area has the Lillian Bryant Recreation Center nearby, as well as the city’s new Water Recharge Park, with its walking trails. She described the combination as a “fantastic recreation corridor.”

Bethea agreed, noting that the community center is in keeping with the city’s Vision 2035 Plan that calls for “connectivity” between recreational facilities across Ocala.

In addition to the recreation facilities that will complement the Mary Sue Rich Community Center, the city has approved plans to develop the old Pine Oaks course into hundreds of homes, including affordable housing. That project has yet to get under way.

“I think this quadrant (the city’s northwest region) is going to be a great gateway to the city, and the further they come into the city, the better it will be,” Bethea said.