A 3-2 vote put the brakes on a proposed ordinance recommended by city personnel, merchants and residents. 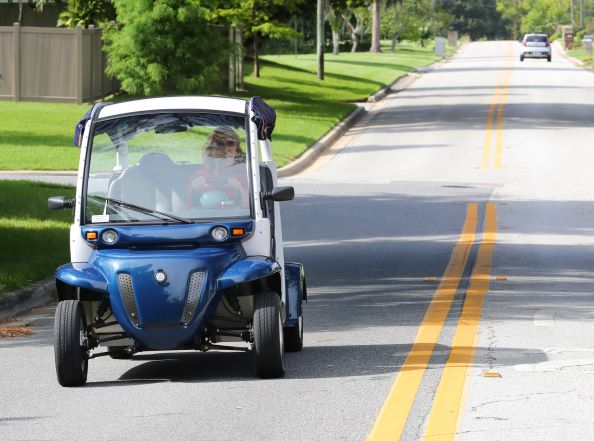 On Nov. 1, the Ocala City Council issued a proclamation for Mobility Week to be celebrated each year in October but failed to adopt Resolution 2023-7, revising the official golf cart map to include the most trafficked portions of downtown Ocala.

The effort to allow golf carts to drive to locally owned businesses had been underway for the past few months and involved two downtown community feedback sessions and research by city personnel.

“The (city) staff recommends approval of the expansion,” Tye Chighizola, Ocala’s growth expansion director, said while addressing the council, adding a recommendation that the ordinance wouldn’t go into effect until April 1, 2023.

Ocala Mayor Kent Guinn asked her to follow up later with him to provide more specifics about the national study she cited to the council members.

“When this was brought up a few months ago, we started having conversations with our downtown businesses and we did conduct a survey,” Fieldhouse said. She also mentioned that 80 percent of the businesses were in favor of the expansion of the golf cart-permitted areas expanded into downtown and 20 percent had some concerns.

The concerns regarded parking and safety, she clarified, and her team presented the businesses’ feedback to the city staff. When Main Street Ocala addressed the concerns during public meetings held in August, there were no additional negative comments coming from the businesses.

“We know that this could become an economic driver for our downtown hub,” Fieldhouse added. “Obviously, our initiative as Ocala Main Street is to connect our full district. So, this is the first phase. We know that it needs to be implemented properly and safely.”

“Oh, I think it’s the dumbest idea,” Hilty said. “I’ve witnessed people (in golf carts) cross Fort King (Street) before. They’re not supposed to be on that side of Fort King; just so they can go to a hairdresser. These people are not gonna take the right respect of what we need downtown and we’re just setting ourselves up for a disaster.”

Council member Kristen Dreyer asked Hilty for facts to back up his dissent. “Do we have any crash data right now that says that we’ve had that happen?” she asked.

“No, we haven’t had one that I’m aware of,” he responded. “It’s an accident waiting to happen.”

“It’s the car’s responsibility,” Mansfield said. “It’s the same thing with people riding bikes and if we’re going to do this and we have this attitude, ‘Hey, you know, I don’t think golf carts (should be downtown),’ well, let’s just go ahead and stop the bicycles and stop the walking.”

Responding with the nays in the 3-2 vote, council President Ire Bethea and council members Hilty and Musleh voted in the majority. Dreyer and Mansfield voted for the ordinance.

The council approved amending some of the regulations listed in the ordinance from 2019 that outlined the current map. Now, drivers 16 and older must possess a driver’s license to operate golf carts in the approved areas.

“We would love to be able to see a connection even all the way up to the Reilly in future years,” Chighizola recommended during the meeting, speaking about the Reilly Arts Center a few blocks north of the downtown square, but said that aspiration may be realized much later than he anticipated, if at all.