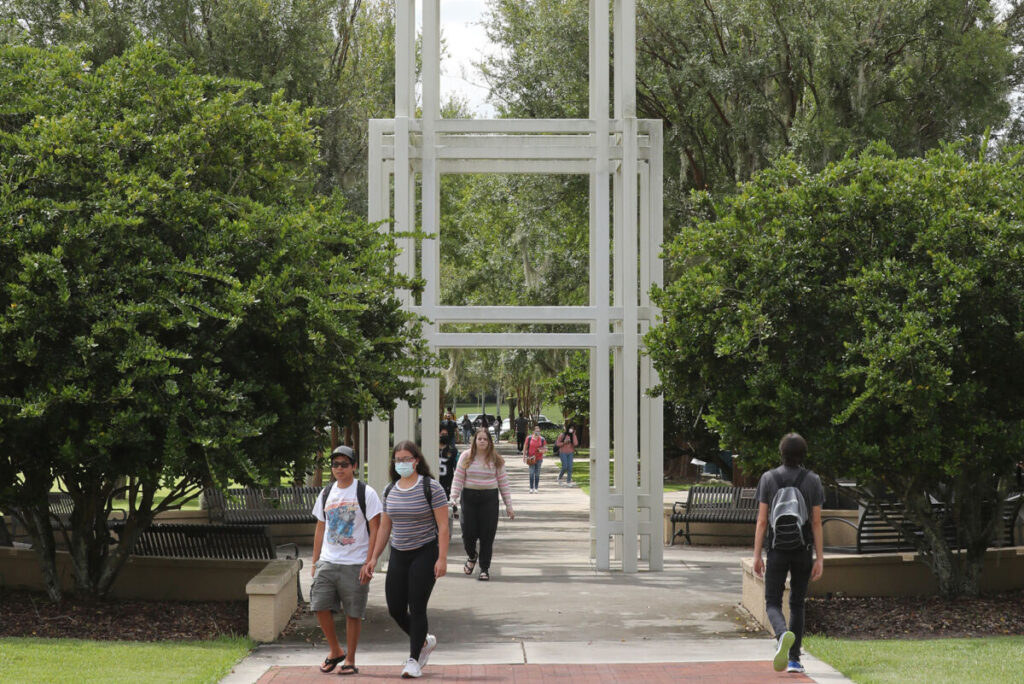 In this file photo, students walk to their next class under the bell tower at the College of Central Florida in Ocala on August 31, 2021. [Bruce Ackerman/Ocala Gazette] 2021.

The College of Central Florida has received a $17 million infusion to bolster its nursing program, thanks to an incentive from the state legislature and the Citrus County Hospital District. It is one of the largest gift and grant commitments in the college’s history.

In an effort to combat the growing nursing shortage in Florida, legislators created the Linking Industry to Nursing Education (LINE) Fund during the 2022 session in hopes of incentivizing collaboration between nursing education programs and healthcare partners. The state grant provides dollar-for-dollar matches to bolster nursing educators’ efforts to raise money from partnering healthcare providers.

Dr. Jim Henningsen, president of the College of Central Florida, told the Gazette that he was looking for partners to be first in line with a request benefiting CF even before Gov. Ron DeSantis signed the appropriations bill.

“Citrus County Hospital District had originally considered committing $3 million, but when news of the state’s incentive came in, they called back and said they were increasing it to $10.3 million,” he said.

Having such a large matching donor to present to the state so quickly paid off because CF received the largest share of LINE funds among the 26 colleges and universities that applied for this competitive grant. The amount is more than one-third of the available $19 million and more than 3.5 times larger than the second-largest grant of $1.9 million.

However, the state’s $6.7 million grant will be used to update equipment and increase staffing across all the college’s nursing facilities.

According to the Florida Department of Education, which will administer the grant, “Funds may be used to award scholarships to students who meet the residency for tuition purposes requirements, recruit additional faculty, purchase equipment, and support simulation centers to advance high-quality nursing education programs throughout the state.”

The grant cannot be used for the construction of new buildings.

“Now, more than ever, we need to recruit and train qualified nurses to meet the growing demands of our local community,” said Henningsen. “The Citrus County Hospital Board’s commitment of $10.3 million in May 2022 made CF eligible for this support from the state, and the combined investment significantly increases CF’s capacity to prepare students for high-demand, high-wage nursing careers. We applaud the insight of the Hospital Board and appreciate the transformational gift that allows CF to lead the way in meeting this critical workforce shortage.

CF offers two options for nursing degrees. One is an associate degree in nursing program, which prepares graduates to become registered nurses, and bridge programs for licensed practical nurses and paramedics to become RNs. The other is a bachelor of science in nursing program designed to prepare RNs for advanced clinical positions and nursing faculty positions.

“CF is one of the most affordable colleges in the country and this unprecedented funding will make a high-quality, high-demand nursing career accessible to even more students in our community,” said Henningsen.

Henningsen says he’s hopeful that the Legislature will fund the LINE grant again to continue incentivizing healthcare providers to invest in the college’s nursing program.