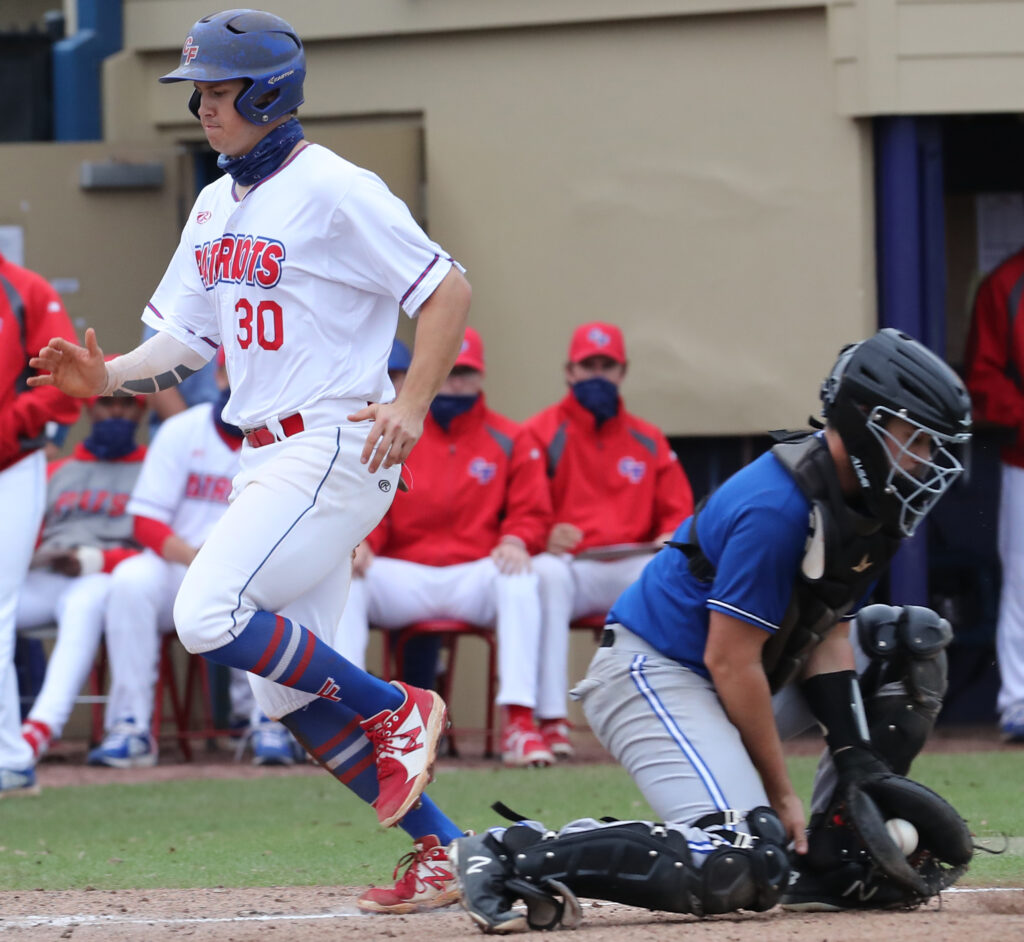 Through 6.2 innings, the College of Central Florida was rolling.

Starting pitcher Logan Adams was unhittable, striking out 10 batters and not allowing a run up to that point. The offense had also done just enough to put the Patriots in the lead 2-0.

But then the wheels fell off for Central Florida.

The Patriots surrendered five runs in the seventh and eighth innings combined in a 5-2 loss to St. Petersburg College (6-3) on Wednesday. Walks, errors and timely hitting by the Titans late in the game ultimately doomed Central Florida (12-4). The Patriots won’t play at home again until Feb. 26 against Tallahassee Community College.

“We had two outs and two strikes in the seventh, and they battled,” Central Florida coach Marty Smith said. “We couldn’t put a hitter away, and he hit a double to right center (field) and it led to three runs.”

Early on, the game was a pitchers’ duel between Adams and Titans starter Channing Young, as neither team scored until the Patriots got on the board first in the bottom of the fourth inning. Redshirt freshman Matthew Cedarburg reached on an error and scored from second two batters later on a Jeslyn Whitehead RBI double. Whitehead later scored on a sacrifice fly to give Central Florida a 2-0 lead.

The score stayed the same until St. Petersburg’s three-run, two-out rally in the seventh.

After retiring the first two batters of the inning, Adams quickly found himself in hot water, allowing a double and then an RBI single that cut the Patriots’ lead in half. With runners at the corners after a single and reliever Troy Britts replacing Adams, Whitehead’s throw to first was in the dirt and got away, allowing two runs to score to give the Titans a 3-2 lead.

Central Florida nearly leveled the score in the bottom of the seventh. Kyler Hultgren reached on an error and advanced to second on a single before moving to third on a wild pitch. Freshman Edrick Felix then skied a pitch to right field, but Hultgren was thrown out at home on the attempted sacrifice fly to end the inning.

“It takes a perfect throw there, and the guy made it,” Smith said.

The eighth inning was just as bad for Central Florida.

A wild strike three turned a strikeout into a runner on first, forcing Smith to turn to Mason Ronan on the mound. Ronan couldn’t make it out of the inning, as St. Petersburg scored two more runs on a ground out and an error. After two walks, Smith replaced Ronan with redshirt sophomore Francisco Mateo, who forced a flyout to end the inning.

The Patriots’ offense couldn’t muster much all game long, and it was shut out over the final two innings to seal the loss. Central Florida scored its two runs off four hits and a walk while striking out seven times.

“They took advantage of some things that we didn’t, so hats off to them,” Smith said.