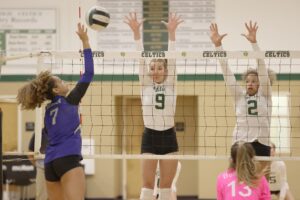 It was business as usual for Trinity Catholic, last year’s Class 3A state champion, as they dispatched visiting Belleview during Wednesday night’s girls’ varsity volleyball game.

Grantham would make her presence felt early in the first set. She would serve the ball seven times to open the match, notching three aces and helping her Celtic team take a quick 7-1 lead.

Amelia Fitzpatrick would serve later in the first set with her Celtic team up 16-6. She would record four aces on nine serves, setting up Trinity Catholic’s first set win of 25-7.

Fitzpatrick finished the game with a total of six kills and three blocked shots.

In set two, Belleview fought back. The Rattlers would keep it as close as 5-4 at one point before the Celtics took over.

Belleview would battle back, coming within five points, but Trinity Catholic’s Crews would take over service and the rest of the set.

Crews, along with Grantham, would tag team service for the Celtics, racking up six points and three points, respectively, giving up only two points to the Rattlers.

Set three was the Grantham show. Behind her service, the Celtics gained 14 straight points—six of those were Grantham aces.

The Rattlers would finally earn a point off a Grantham service fault, but by then, the Celtics were too far ahead, winning the final set 25-4.

Zisa had two kills for the Rattlers.

Trinity Catholic will next travel to face inter-county rival Forest for the first time this season on Oct. 5. Belleview with host Lake Weir on Oct. 5 as well. Both matches are scheduled to begin at 7 p.m.