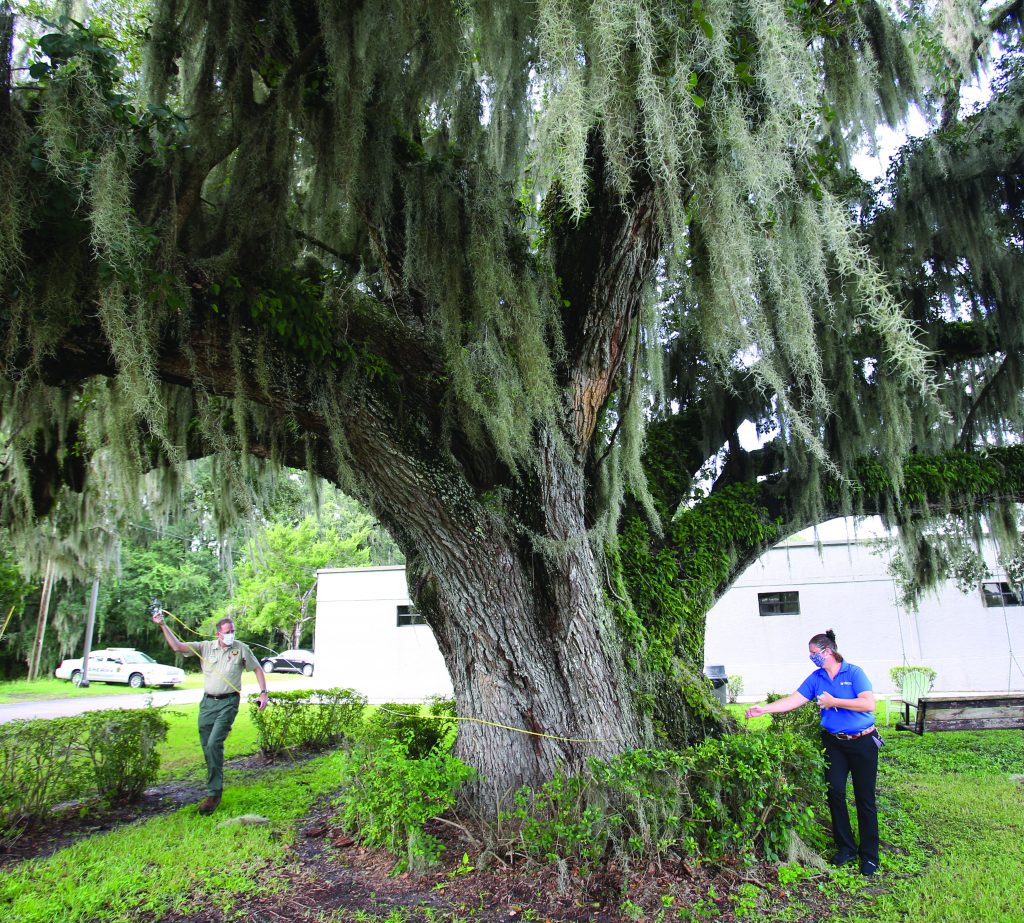 Greg Barton, a forester with the Florida Forest Service, left, and Maxine Hunter of the UF IFAS Marion County Extension, measure the diameter of a large live oak, a challenger for a champion tree, at the Marion County Sheriff’s Office in Ocala.

Greg Barton, a forester with the Florida Forest Service, left, and Maxine Hunter of the UF IFAS Marion County Extension, measure the diameter of a large live oak, a challenger for a champion tree, at the Marion County Sheriff’s Office in Ocala.

Marion County covers more land area than the state of Rhode Island, and much of it is covered in thick tree cover, ranging from private landscaping to tree farms to the Ocala National Forest. And, among those, we have several state champion trees.

According to Greg Barton, our Marion County Forester since 1999, the Florida Champion Tree Program recognizes the largest known specimens of each tree species found in the state. The measurement standards are the same for Florida as well as the national program.

Barton recently spoke about two trees, a Drake elm at Dunnellon High School, which has been officially listed as a state champion, and a live oak on the campus of the Marion County Sheriff’s Office, which, he says, is likely going to “end up as number four on the state list as a challenger to the two current co-champions in Alachua County.” 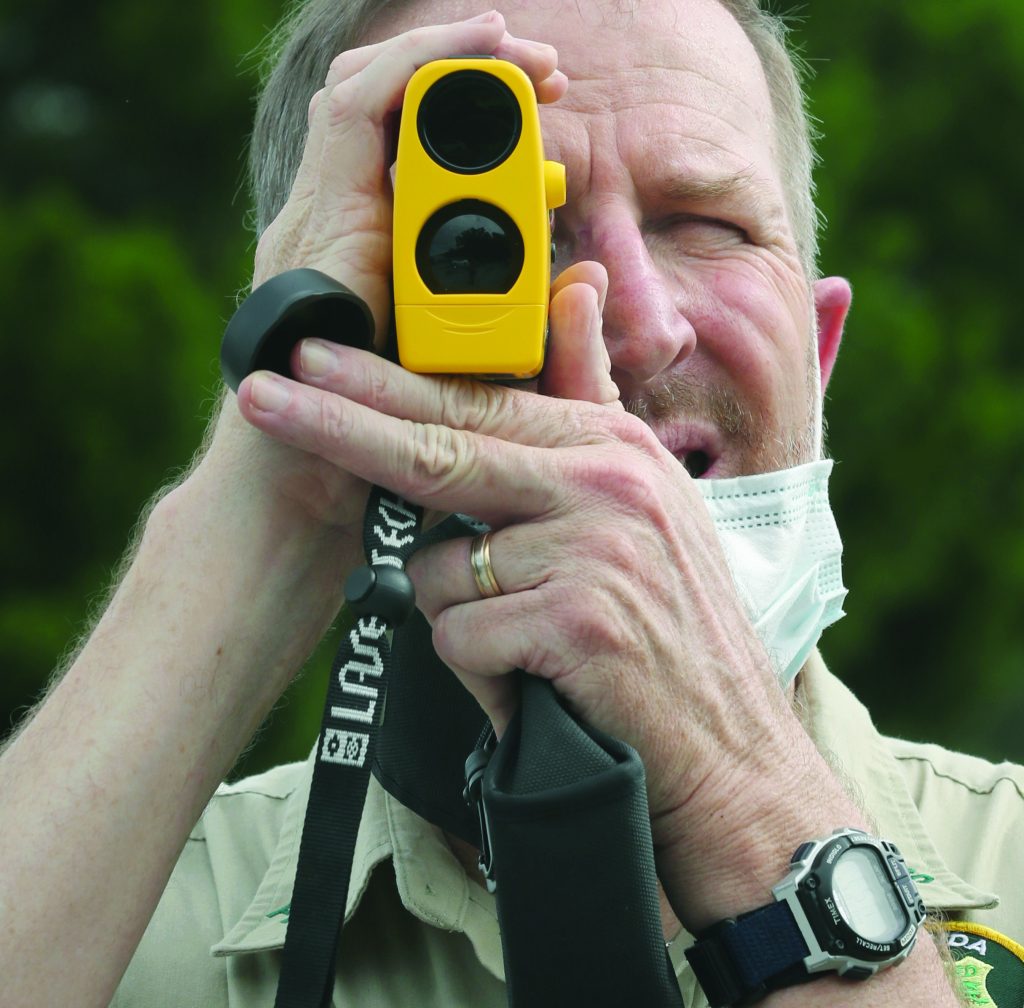 Greg Barton, a forester with the Florida Forest Service uses a laser rangefinder to measure a large live oak, a challenger for a champion tree, at the Marion County Sheriff’s Office in Ocala.

“The MCSO oak is definitely a veteran tree in fairly good health, but does have some conditions,” Barton said. “It appears to have ‘split’ near the base many decades ago. There is some dieback in the crown, as well as some evidence of an old lightning strike. There are also some large pruning wounds where larger branches had to be removed. Overall, the crown and foliage are in good shape. We expect to have some issues with the older trees.”

He said he learned about that tree from Maxine Hunter with the Marion County Extension Service.

Of the Drake elm in Dunnellon, he stated that the tree “is a bit more of a youngster.”

“It has an evenly shaped crown and no notable health issues at last check,” he noted. “It is right by the entrance parking area so it’s a very visible tree. It is not big in comparison to the live oak, so it does not draw immediate attention. It caught my eye during a visit to the school last year.”

According to the Florida Urban Forestry Council, the Champion Tree Program was created by the American Forests organization in 1940 to recognize the largest known tree of each species in the U.S. American Forests publishes its National Register of Champion Trees every two years. The 2018 edition includes 120 Florida champions. The state leads the nation with the most national champs.

The current chart online indicates there are 11 champions in Marion County. These include two national champions, a Chapman oak and a yellow anise. 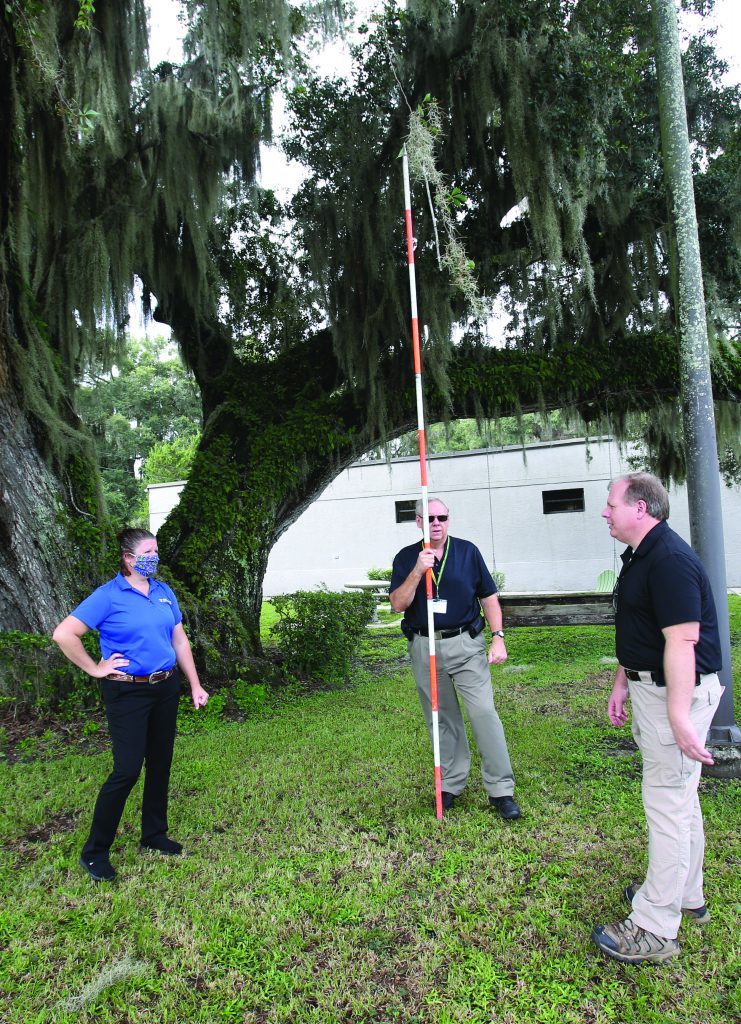 Maxine Hunter of the UF IFAS Marion County Extension, David Palmer, the director of facilities and logistics for the Sheriff’s Office and Capt. Kevin Rowe, left to right, look on as Greg Barton, a forester with the Florida Forest Service, measures a large live oak, a challenger for a champion tree, at the Marion County Sheriff’s Office in Ocala.

“Each tree species is so different,” Barton said. “The most unique one is actually the smallest. At the time of its measurement, the yellow anise in the Ocala National Forest was the smallest national champion by point value of any tree in the country. It’s the classic example of a ‘jumbo shrimp.’ These small tree species are often overlooked because they do not stand out to the novice eye.”

A Florida co-champion is a longleaf pine.

“I’m a little partial to the longleaf pine we have because it does stand out impressively in the open,” Barton stated. “By their nature, trees designated as champions are often very old and may have some unique or deformed growth habits. In some cases, champion status may be brief as trees succumb to old age after discovery. Many years ago, I discovered by accident what would prove to be a national champion Bluejack oak in Pinellas County, but it died just six months later.”

Barton is from Orlando and attended forestry school at the University of Florida. At the time, he was the first person to complete the newly developed Urban Forestry Certificate program. He began working for the Florida Forest Service (then known as the Division of Forestry) in 1989 as a forestry firefighter.

If anyone believes they may know of a champion tree in Marion County, they can reach out to Barton.

“Circumference is usually the primary source for points and can be measured relatively easily by wrapping a string around the trunk, and then measuring the length of the string,” he said. “Nominations can be accepted from anyone. There is no funding associated with champion trees in Florida, so the glory of finding or having a champion is the only reward.”

To learn more, visit the Florida Department of Agriculture and Consumer Services at www.FDACS.gov/FLForestService, call Barton at (352)-732-1782 or email him at greg.barton@FDACS.gov