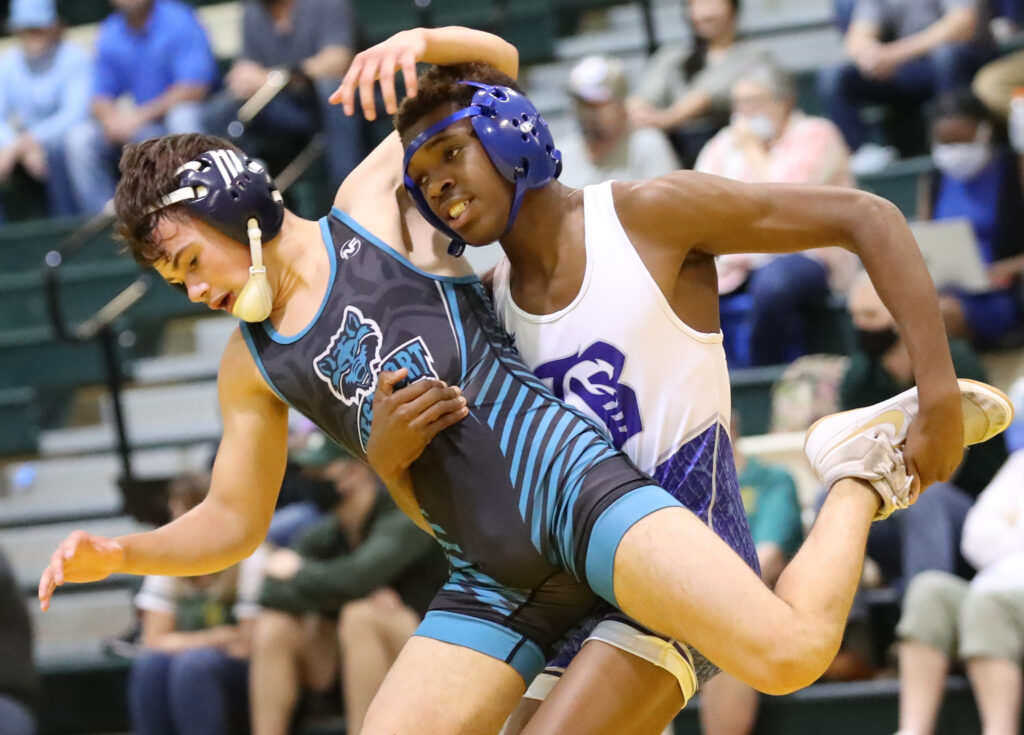 Mark Willis, a junior at Belleview High School, wrestles with Frangello Baltodano, a senior at West Port High School, in the 120 weight class during the MCIAC Wrestling Championships at Forest High School in Ocala on Wednesday. [Bruce Ackerman/Ocala Gazette]

After being an eyelash away from winning last year’s Marion County Interscholastic Athletic Championship, the Belleview Rattlers’ wrestling team ran the table on Wednesday night, capturing the county title for the first time in head coach Bryan Irwin’s three-year tenure.

“It’s been an Achilles heel to me,” Irwin said. “We lost last year by three and then we avenged the loss about two weeks later at our tournament, the Diamondback Duels. And then the year before that, we were banged up with injuries.”

But during Wednesday’s championships at Forest High School, the Rattlers left little room for questioning their squad’s talent.

Of the 14 weight classes, the individual class champion hailed from Belleview in eight of them. And of those eight champions from the Rattlers, six finished their title run undefeated. And spelling trouble for the rest of the county next season, five of the Rattlers’ eight champs are underclassmen.”

And after that many on Irwin’s young roster finished their night flawless, it was hard for the Belleview coach to isolate anyone as a standout.

“I just like the team effort,” Irwin said. “We came out today, we’ve been working real hard in the room and everything just kinda clicked in for us… We came in and put our heads down.

Following behind the Rattlers in the team championship were the Forest Wildcats, followed by the West Port Wolfpack and Lake Weir Hurricanes.

The complete list of individual champions is as follows: