At the Spring Dawn

I watched the dawn come,

And the red sun shouldered his way up

Through the lilac mists.

The quiet of it! The goodness of it!

And one bird awoke, sang, whirred

A blur of moving black against the sun,

And I stretched my arms to the redness of the sun,

Stretched to my finger tips,

Ah! It is good to be alive, good to love,

At the spring dawn. 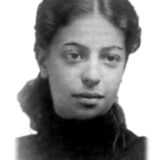 Angelina Weld Grimké, born in Boston on February 27, 1880, was a journalist, playwright and poet from the Harlem Renaissance, an intellectual and cultural movement that spanned the 1920s and 1930s in New York City. Her work was collected in “Negro Poets and Their Poems” (The Associated Publishers, 1923) and “The New Negro” (Atheneum, 1925). She died on June 10, 1958.