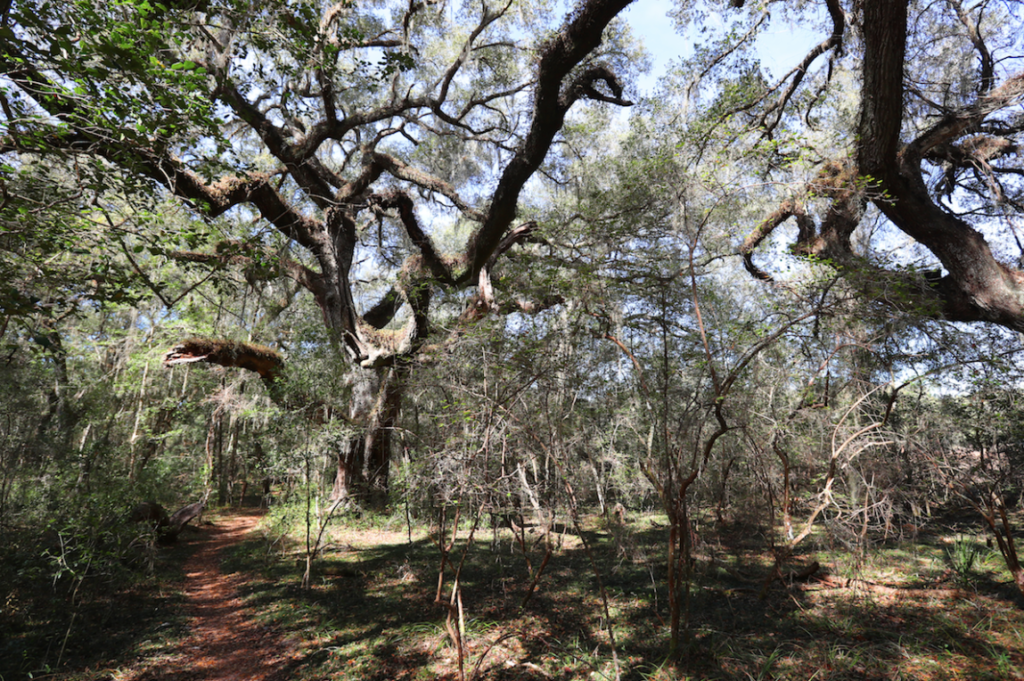 Editors’ Note: This summary is one of four routes. To read more about the other routes, click here. 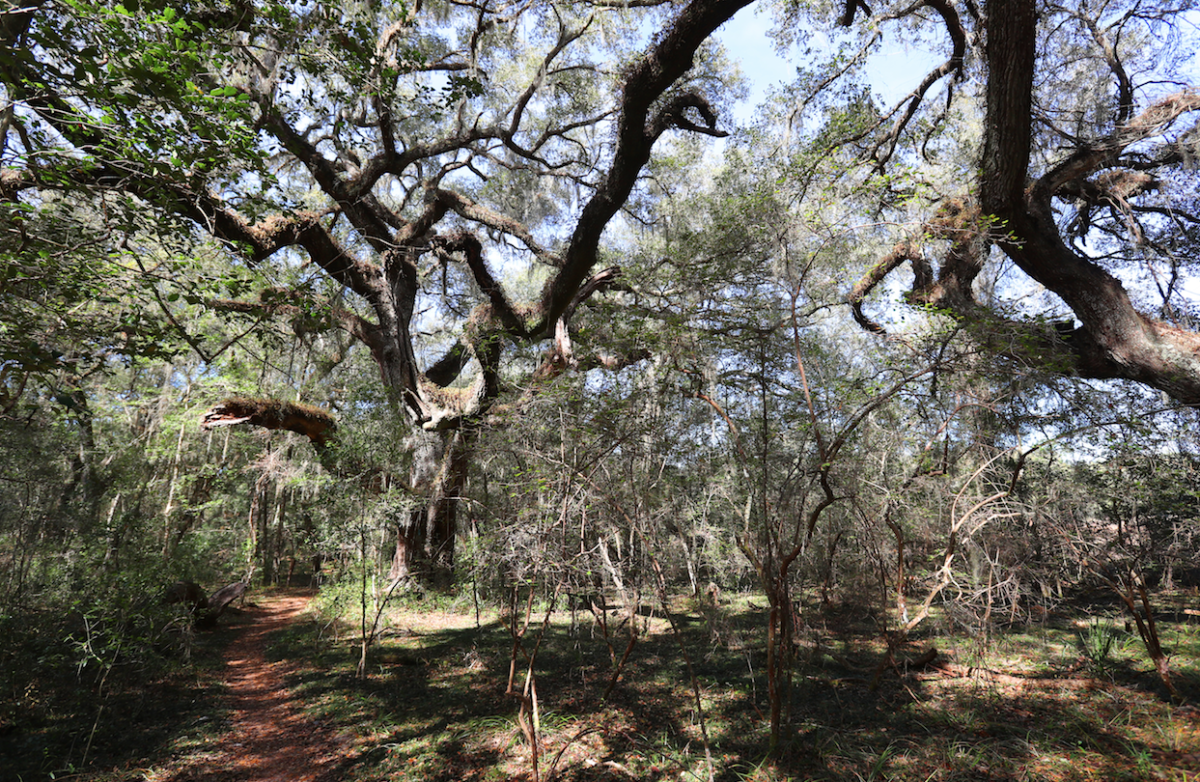 A large live oak winds its branches up and over the trail on the Marjorie Harris Carr Cross Florida Greenway Ross Prairie Trail, which is part of the Florida Trail, off State Road 200 west of Ocala, Fla. on Tuesday, Feb. 1. One of the proposed Northern Turnpike Extensions comes right through the Ross Prairie Trail and the Ross Prairie Forest. [Bruce Ackerman/Ocala Gazette]

According to The Florida Department of Transportation (FDOT) assessment on the proposed routes for the Northern Turnpike Extension, the #3 alternative, also known as the Alternative Corridor Central, is a proposed 42-mile stretch of new road that would begin at the I-75/Turnpike interchange in Wildwood and end at a logical terminus yet to be determined.

Unlike the other three proposed routes, the Alternative Corridor Central has a much wider potential path. The route would be outside of any United States Department of Agricultural (USDA) Prime Farmlands as well as the Marion County Farmland Preservation Area. Further, Marion County’s Comprehensive Plan requires an amendment for development outside of the urban growth boundary,” which is where the road would fall.

Amanetta Somerville, who reviewed the project for the Environmental Protection Agency (EPA) noted “The EPA encourages evaluating and discussing noise impacts and their effects on local businesses, schools, and communities in a future environmental document.”

FTE analyzed the 2015-2019 American Community Survey Five-Year Estimates and compared the three counties affected by the potential route with statewide averages and found that they have higher numbers of residents over the age of 64 as well as persons with disabilities.

Using the Environmental Screening Tool (EST) Sociocultural Data Report (SDR) to compile demographic data within the boundaries of the Alternative Corridor Central. The report stated “The SDR identified a total population of 10,281 of which 16 percent are minorities. Approximately 29 percent are persons are over the age of 64.”

The report stated there are 4,234 households within the boundaries of the proposed route, of which approximately 19 percent are below the poverty line. It indicated the median household income is $47,190, and less than 1 percent speaks English “not well or not at all.”

The assessment goes on to state “The study area includes large rural areas with a low population density and few visitor attractions…while improved transportation access to these tourist attractions is not sufficient to cause an increase in tourism activity, it could help support local economic development goals.”

FTE observed there are no scenic highways within the area, “However A USDA Forest Service Florida National Scenic Trail, the Withlacoochee State Trail, traverses the Alternative Corridor Central.”

According to FTE, Marion County’s 2045 Future Land Use Map “Indicates that the area where the Alternative Corridor Central lies will continue to support rural land uses with an increase in residential uses,” and that “The proposed project aims to create an aesthetically pleasing corridor.”

As there will be a need for additional right-of-way to develop the proposed limited access corridor, FTE found that some properties within the area may be affected as a result of the proposed route, and “FTE will coordinate with the local communities and property owners as the project advances.”

The FTE noted there were “52 historic structures, two historic cemeteries, one historic bridge, 109 archaeological or historic sites, six linear resource groups, one designed historic landscape, and one mixed district within the proposed boundaries of the Alternative Corridor Central.”

Both Monte Ritter with the Southwest Florida Water Management District (SWFWMD) and Marcy Welch with the Florida Department of State (FLDOS) indicated a Cultural Resources Assessment Survey (CRAS) must first be conducted before both agencies can further assess the impacts.

Florida Department of Environmental Protection (FLDEP) Division of Recreation and Parks indicated they would prefer a corridor “That does not bisect the Cross Florida Greenway.”

The assessment also found the “Withlacoochee State Trail would be interrupted from having a continuous trail experience,” and that “Crystal River Preserve would be impacted by high traffic volumes and associated urban growth which may affect the wilderness characteristics and resource focus of the park.”

Regarding wetlands and surface waters, according to Chris Stahl with the FLDEP noted that this route alternative had the “most amount of wetland impacts,” of the four proposed routes.

Additionally, he noted that forested wetlands are difficult to mitigate, and once contaminants reach wetlands, water chemistry changes can damage the ecosystem.

The proposed construction project will require an environmental resource permit(s) (ERP) from the SWFWMD and/or the FLDEP, and will be “required to eliminate or reduce the proposed wetland resource impacts of roadway construction to the greatest extent practicable.”

Somerville stated that the proposed route affected over 3,700 acres of wetlands, and its potential effects on habitats used by federally-managed fish species could be damaging. As a result of the proposed alternative’s significant and broad impacts, as well as the need for an ERP, “The EPA does not recommend this alternative.”

FTE observed in the assessment that design considerations such as pile bridging and median width reductions with safety limits should be utilized, and stated “Wetlands are important because they are a critical natural resource and serve several functions, including filtration and treatment of surface water runoff, store floodwaters, and provide erosion control. Stormwater runoff from roadways carries pollutants such as volatile organics, petroleum hydrocarbons, heavy metals, and pesticides/herbicides.” 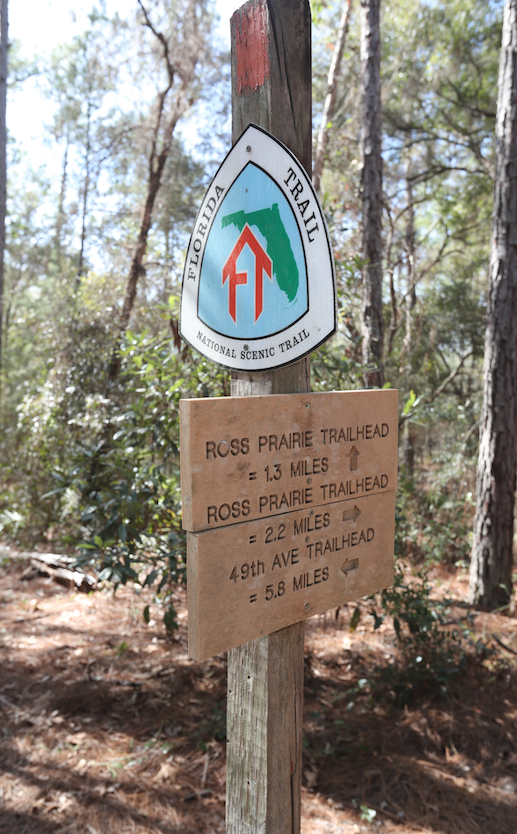 Similar to their position on the effects of the Alternative Corridor Central, Somerville believed the proposed route will adversely affect water resources in the area because it “Is a new roadway alignment through primarily undeveloped land and extended length.”

Although it also found no critical habitats were present in the route’s proposed area.

Zakia Williams with the US Fish & Wildlife Service observed “Species of concern in the area are the FL scrub-jay, sand skink, wood stork, and the eastern indigo snake.”

Additionally, the report mentioned “Main direct impacts for both state forests on prescribed fire operations/smoke management on state forest property, and fragmentation effects for animals with large home ranges,” as a potential issue with the proposed route.

David A. Rydene with the National Marine Fisheries Service (NMFS) believed the proposed route will not impact any NMFS resources directly.

He noted, however, that not just the Alternative Corridor Central, but all of the proposed routes “Will cross numerous marsh and spring systems (e.g., Gum Swamp), and in some cases also cross the Withlacoochee River as well.”

This is worth noting, Rydene believed, because, “The mouth of the Withlacoochee River, Withlacoochee Bay, and the Gulf of Mexico contain habitats (e.g., salt marsh and seagrass) used by federally-managed fish species and their prey. Construction and use of the Northern Turnpike Extension could result in an increase in the amount of sediment, oil and grease, and other pollutants reaching estuarine and marine habitats utilized by marine fishery resources.”

Regarding air quality, Somerville did not see a substantial drop in potential air quality once the road was operational, however, she stated “The proposed roadway improvement and expansion may temporarily degrade air quality during construction.”

Further, Ritter noted regarding the Florida Aquifer Vulnerability Assessment II of the Floridan Aquifer System that the area was classified as “Most Vulnerable” for approximately 100% of the project area within a 500-foot buffer.