Agencies looking at day centers for the homeless 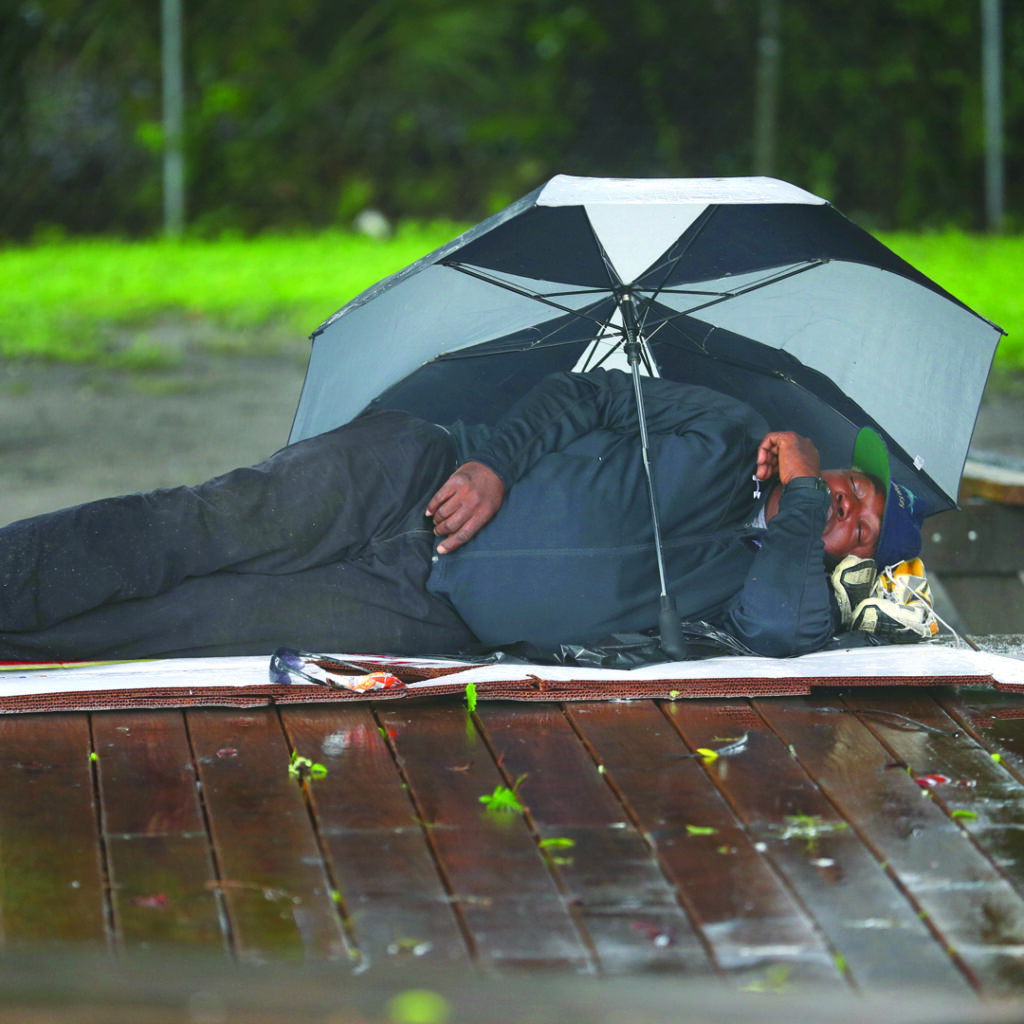 An unidentified homeless man tries to stay dry under an umbrella as he sleeps in the rain at Interfaith Emergency Services in Ocala, Fla. on Monday, August 31, 2020. [Bruce Ackerman/Ocala Gazette] 2020. 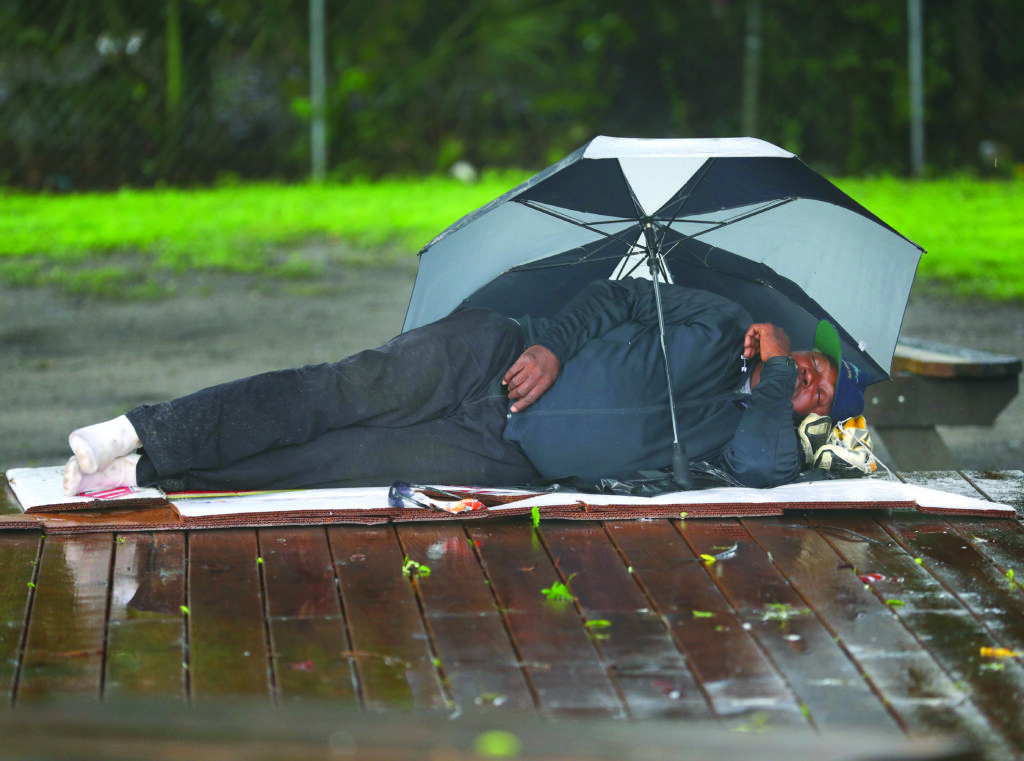 An unidentified homeless man tries to stay dry under an umbrella as he sleeps in the rain at Interfaith Emergency Services in Ocala.

What homeless advocates say is needed is a place where the homeless can be engaged and their needs assessed so they can get the help and services they need. And here in Ocala, the community’s two largest homeless service agencies say they each are working toward just that.

“A lot of people downtown aren’t Salvation Army clients, because they don’t want to be or they aren’t compliant with the Salvation Army’s rules,” said Karla Grimsley, executive director of Interfaith Emergency Services. “And those people are always downtown. They’re in every downtown in America.”

“You’ll find people on the street who prefer that to the communal living of a shelter with all its rules,” he said. The Salvation Army does not take in people who are under the influence of drugs or alcohol.

What Durham and Grimsley say is needed is what Grimsley described as “an engagement center, a place where people can have some benefit, get support services.” These centers would provide the homeless somewhere to go during the day and provide them something to drink, something to eat and a place to rest. They also say their agencies need more “street level” case managers to help the homeless navigate the various programs and agencies that are available to them and to track their progress.

“The key to addressing the issue with the homeless people downtown is getting them connected to services to get them housed,” said Scot Quintel, executive director of the United Way of Marion County and chairman of a 2019 Public Policy Institute Study called “Homelessness: The Long Way Home.”

“The best way to do that is through a central access point where social service organizations can engage the homeless population and begin meeting their individual needs and put them on a path to where they can be housed.”

Both the Salvation Army and Interfaith have such facilities on the drawing boards.

Durham said his organization is starting the renovation of an old building on its property north of the county courthouse that would not only be an assessment center but also a day center for what is called “low-barrier” clients – that is, people who are under the influence or have other circumstances that would otherwise prevent them from staying in the Salvation Army shelter due to its rules.

“In cities where this is working,” Durham wrote his board in a recent memo, “there is strong financial support from the municipalities, as well as case management. … To accommodate more low-barrier sheltering, more resources are needed.”

Grimsley said Interfaith is working to establish an “engagement center” as well as getting more federal money for case management. And she believes that both the Salvation Army and Interfaith having similar day centers where the homeless are engaged would not be too much.

The move to more one-on-one engagement of the homeless, specifically to put them in case management programs, is being fueled in part by new money being available, Grimsley said. She said the Coronavirus Aid, Relief, and Economic Security Act, or CARES Act, has provided new, though short-term money to the community’s homeless efforts, while the more important piece is the creation of the new city-county Joint Office of Homeless Prevention & Intervention.

The Joint Office of Homeless Prevention & Intervention was an outgrowth of the PPI study and took the county’s Continuum of Care, the vehicle through which the federal government funnels funding aimed at reducing homelessness to communities, from being under the Marion County Homeless Council and put it under the auspices of the new jointly run agency. Both Grimsley and Durham said the new arrangement is more coordinated and has already produced new funding opportunities.

Durham said a new day center for low-barrier clients, or in Grimsley’s case an engagement center, will help his organization better assist homeless people that currently are not getting the attention they or the community needs – the mentally ill and those with substance addictions, I  particular. 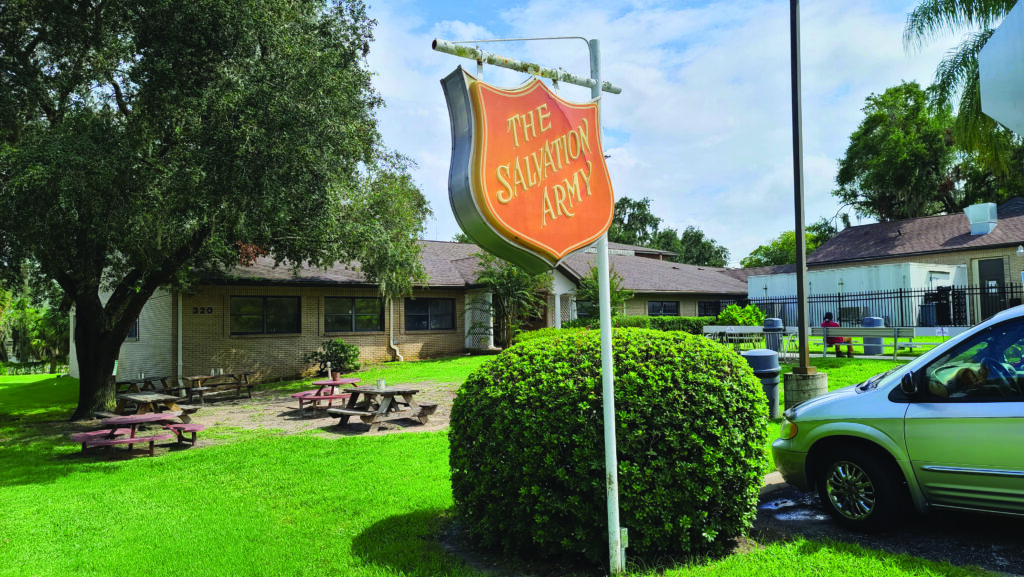 The Salvation Army is shown in downtown Ocala.

One thing that is unlikely to happen, although it has been proposed time and again over the years, is moving the Salvation Army out of downtown. The city and developers have approached the Salvation Army on numerous occasions about moving out of the downtown, but the price tag to do so — estimated at about $10 million to rebuild a comparable facility – is just too costly. Plus, most homeless advocates say it would not eliminate the homeless from downtown.

“Every community has the same issue,” Durham said.

A 2015 study of the Salvation Army’s impact on the downtown came to a similar conclusion. The study, conducted by local real estate appraiser Steve Albright for the city of Ocala, found that while there was no doubt the agency was indeed a “significant contributor” to homeless people in the area, and it does not fit in with the city’s vision for the development of the neighborhood known as “midtown,” it is not the sole contributor to the problem.

“My research also revealed a fairly recent trend of an increased presence in the defined neighborhood of entities catering to social program/needs,” Albright wrote, adding that moving the Salvation Army or limiting its scope “would be only the first of many steps and obstacles toward truly changing the complexion and direction of the immediate neighborhood.”

Quintel said the attitude and approach of local political leaders is shifting in a positive direction, and that can only be beneficial.

“We’re beginning to see more community leaders who are willing to have the long conversation that it takes to address this issue,” he said.