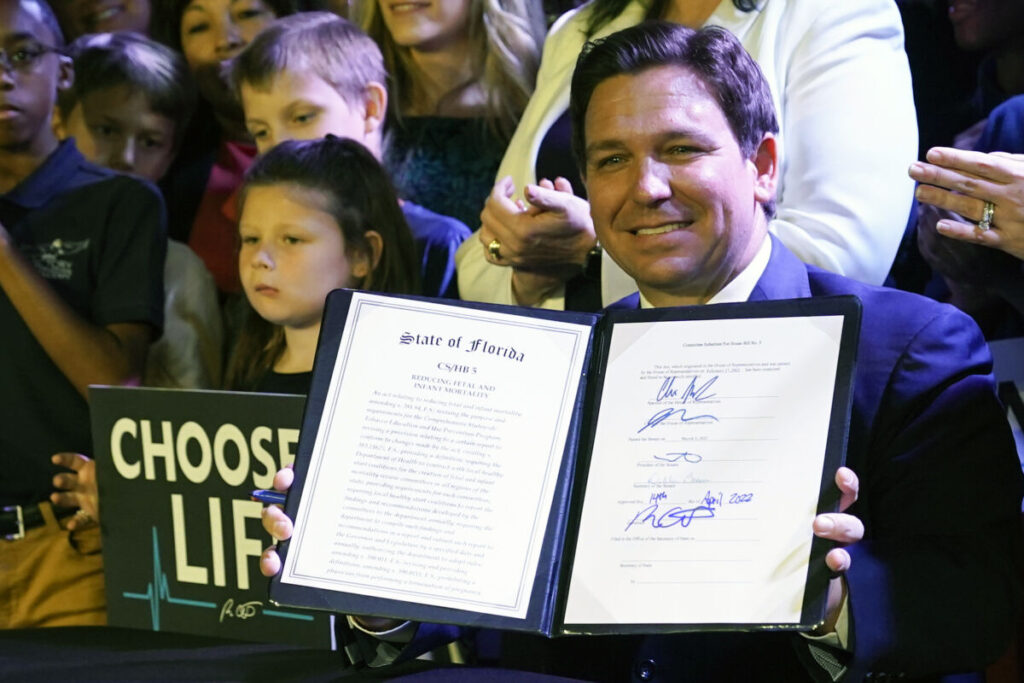 FILE – Florida Gov. Ron DeSantis holds up a 15-week abortion ban law after signing it on April 14, 2022, in Kissimmee, Fla. Reproductive health providers sued Florida on Wednesday, June 1, 2022, alleging that the law violates a provision in the state constitution guaranteeing a person’s right to privacy, “including the right to abortion.” (AP Photo/John Raoux, File)

A South Florida Jewish congregation has challenged a new state law that blocks abortions after 15 weeks of pregnancy, contending the measure violates privacy and religious-freedom rights.

The lawsuit, filed Friday in Leon County circuit court by Congregation L’Dor Va-Dor, seeks to block the law from taking effect July 1. Abortion clinics also filed a lawsuit this month in Leon County challenging the constitutionality of the restriction.

Both cases include allegations that the law, signed by Gov. Ron DeSantis in April, violates a privacy right in the Florida Constitution that has long played a pivotal role in abortion cases in the state.

But the lawsuit filed Friday by the Palm Beach County congregation also contends that the law violates religious-freedom rights.

“For Jews, all life is precious and thus the decision to bring new life into the world is not taken lightly or determined by state fiat,” the lawsuit said. “In Jewish law, abortion is required if necessary to protect the health, mental or physical well-being of the woman, or for many other reasons not permitted under the act (the new law). As such, the act prohibits Jewish women from practicing their faith free of government intrusion and thus violates their privacy rights and religious freedom.”

The lawsuit also said congregation members and other people who “do not share the religious views reflected in the act will suffer … irreparable harm by having their religious freedom under the Florida Constitution violated.”

The 15-week abortion limit was one of the most-controversial issues of this year’s legislative session and came as the U.S. Supreme Court considers the constitutionality of a similar Mississippi law. A leaked draft opinion in the Supreme Court case indicated justices could use it to overturn the landmark Roe v. Wade abortion decision.

When DeSantis signed the bill, he held an event at a Kissimmee church, with screens displaying the message, “Florida protege el derecho la vida,” or “Florida protects the right to life.”

The law prevents physicians from performing abortions after 15 weeks, based on the first day of the woman’s last menstrual period. It includes limited exemptions, such as in circumstances when physicians certify that abortions are needed to save the lives of pregnant women.

The lawsuit filed Friday names as defendants DeSantis and numerous other state officials. It has been assigned to Circuit Judge Layne Smith. The other case filed June 1 by abortion clinics is pending before Circuit Judge John Cooper.