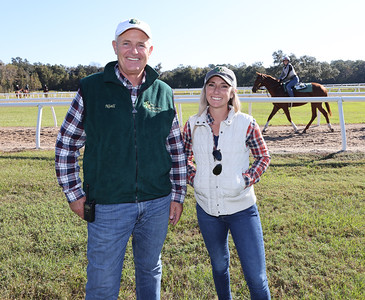 Lauren Bandi poses for a photo with Niall Brennan as exercise riders work with yearlings on the track at Niall Brennan Stables in Ocala, Fla. on Tuesday, Nov. 9, 2021. [Bruce Ackerman/Ocala Gazette] 2021.

Special to the Gazette

Lauren Bandi poses for a photo with Niall Brennan as exercise riders work with yearlings on the track at Niall Brennan Stables in Ocala, Fla. on Tuesday, Nov. 9, 2021. [Bruce Ackerman/Ocala Gazette] 2021.

For Crystal Fernung, an advisory board member for the Thoroughbred Retirement Foundation (TRF), the TRF Second Chances Farm is a regular sight during her daily commute. Her house sits down the road from it and driving by the farm so often gives her a chance to peek at the 50 or so horses on the grounds.

The TRF farm is far from your average horse farm, though. Opened in 2001, the Second Chances farm offers a home for retired Thoroughbred racehorses as well as a rehabilitation program for women in the Lowell Correctional Institute (LCI). The collective work of the Florida Thoroughbred Breeders’ and Owners’ Association, the Florida Department of Corrections, and the TRF brought the Second Chances program to Ocala.

Women in the program tend to the horses, handle farm maintenance, and get training in practically every part of the equine industry. Though it focuses on preparing women for jobs in the industry, the program inspires a sense of responsibility and self-confidence that’s transferable to anything the women choose to do after release.

The Lowell farm recently celebrated its 20th anniversary in October, and after 16 years working the farm, TRF equine program director John Evans said he’s still in awe of what the program does.

“It’s amazing how horses heal people,” Evans said. “I don’t know who benefits more: the students or the horses.”

Evans said there are over 200 women who have graduated from the program, all of whom have received extensive knowledge of the industry. Besides having a textbook, the program gives women access to video tutorials and other resource books to learn from.

“It goes through every aspect of the business,” Evans said. “I wish I could’ve had it when I was 13-years-old. I had to find a lot of it out myself.”

Kim Weir, TRF director of major gifts and planned giving, said that being in the program also presents a one-of-a-kind learning experience for women trying to rebuild their self-esteem.

“Horses do not care what you did ten minutes ago,” Weir said. “They only care if you’re here to help them today. And that’s the first time many of these individuals have had anybody look at them and believe that they could do something.”

Fernung said that, contrary to some people’s beliefs, the program isn’t merely a way for women to avoid being in the prison.

“It’s not just a bunch of convicts over there mucking stalls to get out of prison for a while,” Fernung said. “They really, truly are changed by this program and that’s what people need to see.”

TRF executive director Pat Stickney said that visiting the Second Chances farm is a powerful way to witness the change it brings these women.

“If you visit Lowell… the women can’t wait,” Stickney said. “You’re there for a few minutes, and the women start to gather around you. They can’t wait to tell you their experience and their connection with the horses.”

To celebrate the farm’s anniversary, TRF hosted a 20th anniversary livestream to raise awareness of the program. Weir said she hopes that greater recognition of the farm spurs what she calls the “elegant solution.”

“I call it the ‘elegant solution.’ People may love the horses first, and then, ‘Oh, isn’t it nice that the people are doing so well?’ And then there’s others who are like, ‘These people deserve second opportunities; isn’t that nice that the retired horses have a place?’”

However, some employers remain hesitant to hire former convicts. According to a Prison Policy Initiative report, formerly incarcerated individuals suffer an unemployment rate of around 27 percent, which is over five times greater than the national average of 4.6 percent. Weir said that while TRF’s primary duty is to the horses, it actively works to humanize the women that care for the horses.

“Our donors don’t give us money to change people’s perceptions of previously incarcerated individuals—that’s a pretty big ask,” Weir said. “But we are doing it with every story we tell.”

Nonetheless, some open-minded employers in Ocala have provided jobs to women from their program following their release. Niall Brennan, owner of Niall Brennan Stables, has reaped the benefits of hiring driven graduates like Lauren Bandi to his team. She came to Brennan for a job when she was released, and Brennan said he never held her criminal record against her.

“You know, the Bible says, ‘He who is without sin can throw the first stone,’” Brennan said. “If you’re looking for help, which many farms are, then you’ve got a choice: either give this lady a chance or do it yourself.”

As an immigrant from Ireland, Brennan said he still has hope that the American dream can prevail for these women post-release even if some employers judge them for their background.

“This is still America,” Brennan said. “Despite everything going on, it’s still the land of opportunity. If you can dream it, you can do it.”