[The city breaks in houses to the sea, uneasy with waves,]

The city breaks in houses to the sea, uneasy with waves,

In the streets truck-horses, muscles sliding under the steaming hides,

Pound the sparks flying about their hooves;

And fires, those gorgeous beasts, squirm in the furnaces,

Under the looms weaving us.

At evening by cellars cold with air of rivers at night,

We, whose lives are only a few words,

Watch the young moon leaning over the baby at her breast

And the stars small to our littleness.

The slender trees stand alone in the fields

Between the roofs of the far town

And the wood far away like a low hill.

In the vast open

The birds are faintly overheard. 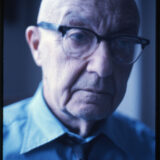 Charles Reznikoff, born August 31, 1894, in Brooklyn, New York, was a poet and novelist from the Objectivist movement, a movement of individuals who sought to study and advance Objectivism, the philosophy expounded by novelist-philosopher Ayn Rand. Reznikoff was the author of many collections, including “Testimony: The United States (1885-1890): Recitative” (New Directions, 1965). He was awarded the 1971 Morton Dauwen Zabel Prize by the National Institute of Arts and Letters. He died on January 22, 1976.