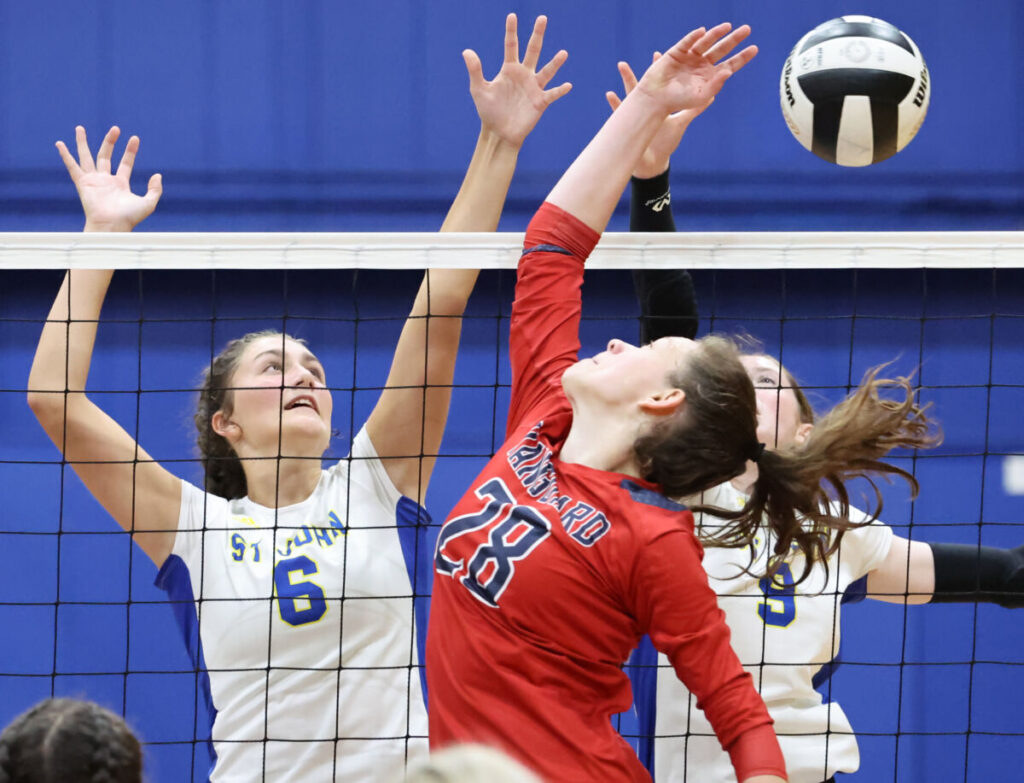 With postseason play beginning in a week and a half, the Vanguard and St. John Lutheran volleyball teams are focused on getting ready to play their best when it matters most.

The hard-fought victory improved the Class 5A Knights to 8-9 on the season.

“It was a fun match and what I expected,” said Vanguard coach Luis Perez. “I have a lot of respect for St. John Lutheran and coach Brad Ewers because they played hard and fought for every point. We were looking to play someone that would make us work and they did. We’re focusing on finishing the season strong and being healthy for districts.”

The loss dropped the Class 2A Saints to 17-4 overall.

“It was exciting to have Vanguard in here,” said St. John Lutheran coach Brad Ewers. “They have a great program and we’re trying to play some really good teams to help us get better to prepare for the postseason. I thought we fought the entire match and kept battling even when we were behind. We got a lot of our hitters involved and that was exciting to see.”

The first set was tied five times, the last time at 13-13, before Vanguard pulled away behind the solid play of sophomore middle hitter Lillian Hart, who had three of her 14 kills, and senior outside hitter Ruby Owen, who added three of her team-high 16 kills.

A St. John Lutheran service error and a service ace by Vanguard’s Sachi Patel gave the Knights the 25-21 win.

St. John looked to be in control of the second set after building a  20-14 lead behind excellent play by sophomore outsider hitter Rylee Palmateer, who had several of her match-high 20 kills.

But Vanguard rallied as Owen found the floor with several powerful spikes and sophomore Sarah Beville had a block and a spike to tie the score at 23. The next two points were long and exciting rallies with Owen finishing both with spikes to give the Knights’ the 25-23 victory.

The third set was the opposite of the second as Vanguard cruised to a 17-12 lead before St. John stormed back to tie the score at 20-20. Sophia Ochoa had two of her 15 kills and Palmateer added several more as the Saints took the third set by a score of 25-21.

Vanguard regrouped and came out firing on all cylinders in the fourth set to take an 18-11 lead. Once again St. John rallied to pull within 23-19.

Vanguard junior middle hitter Ronya Hamed drilled a winner and Owen nailed a cross-court spike to seal the victory for the Knights.

“This was a good win and it’s been a tough season with the injuries we’ve had,” coach Perez said. ”

Vanguard is at Santa Fe on Thursday night.

St. John is back in action on Tuesday night with a home match against The Rock (Gainesville).