Gallery: Rollerson and Simpson lead Dunnellon to season-opening over Belleview 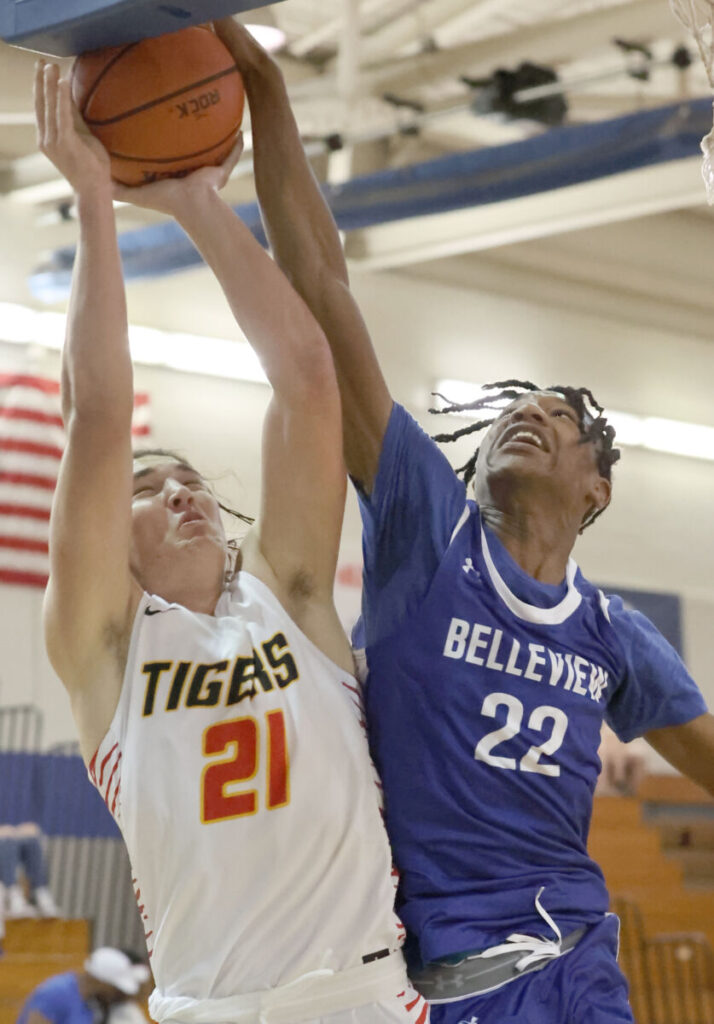 Belleview’s Antoine Armbrister (22) blocks a shot on the basket by Dunnellon’s Eli Nelson (21) up by the backboard during a basketball game at Belleview High School in Belleview, Fla. on Tuesday, Nov. 22, 2022. [Bruce Ackerman/Ocala Gazette] 2022.

Belleview is looking to bounce back from a 4-21 record in 2021 and Dunnellon is hoping to build off a 20-win season and a playoff appearance. Both teams got off to a sluggish start as Dunnellon led 4-0 after four minutes.

Coming off the first timeout, Dunnellon sophomore Tre Rollerson hit a gorgeous layup against a defender, Belleview got on the board with three minutes left in the first quarter after senior Cori Johnson hit two free throws. Dunnellon led 14-8 after the first quarter as four different players scored a basket.

Belleview started fast in the second quarter as Johnson scored three points to pull the deficit to 14-11. Dunnellon would follow with a 11-5 run on the backs of sophomore Eli Nelson and junior Aramys Ramirez.

Following a timeout with 4:41 left before halftime, Nelson scored four consecutive points to extend the lead to 13 points. Belleview gained a dash of momentum in the last two minutes of the first half because of three made free throws by Samuel Vargas and a three-pointer from Julian Ramos to bring the deficit to 10 at halftime.

The third quarter was a defensive battle as both teams notched multiple steals and a back-and-forth scoring battle ensued between Johnson of Belleview and Rollerson and sophomore Sean Simpson for Dunnellon.

Dunnellon had to turn to other scoring options with Ramirez and Sean Martin in foul trouble early and Dunnellon head coach Melissa Mosby knows that’s an important trait for successful teams.

Despite sloppy play from their offense, Dunnellon led 57-40 at the end of the third quarter. Just like the third quarter, Belleview started quickly in the fourth quarter as Johnson scored four consecutive points to whittle down the deficit to 13.

Following a basket from Martin, Johnson hit four free throws and Vargas hit a wide-open three point shot to aid a 15-4 run and Belleview only trailed by six with 3:24 left in the game. By this point in the game, free throws became a major factor with both teams over 10 fouls.

Dunnellon used it to their advantage and finished the game on a 13-9 run to win 81-71. Simpson scored six of his 21 points in the final two minutes, he also added two rebounds to his scoring effort.

Rollerson finished with 19 points, a career-high, and four rebounds. Eli Nelson had a solid night in every facet of the game with 11 points, 7 rebounds, two steals and two blocks.

Leading the way for Belleview was Johnson, he scored a game-high 38 points to go with four rebounds.

It was a historic night for Johnson and the Belleview basketball program as he surpassed 1,000 career points. Belleview head coach Jason Hasson said there will be a pre-game ceremony honoring Johnson’s achievement at their next home game on Dec. 1

Belleview never led and at times were down double digits but seemed to always get within six or seven points and not fall completely out of the game. For Johnson, he talked about being a leader in those moments and being more than just a scorer.

“Just telling them to keep pushing off momentum and not play in spurts, if we can do that we can be a great team.” Johnson said.

Vargas was second on the team with 11 points, Antoine Armbrister finished with five points and a team-high eight rebounds. Freshman Darnell Goodman and Brandon Woode combined with sophomore Devon Johnson to play major minutes as they gain experience for the future.

“It was their first real varsity game and they played fearless. They have some things to work on, but I feel very good about that group, and they will be good.” Hasson said.

Dunnellon has a bevy of scorers on offense, and everybody is willing to play suffocating defense. The results show the effort on defense was not in vein as they finished with six blocks and seven steals to keep Belleview’s offense off balance all game.

“We knew if we were aggressive, they would turn the ball over. We just didn’t anticipate the fouls.” Mosby said.

Winning the first game of the season is always great because it can set the tone for a successful season and Rollerson has high hopes for this year.

“It was great to push through, we fought hard on defense as always. I’m excited and I feel like this could be a great season.” Rollerson said.

Dunnellon (1-0) will be hosting a tournament this Friday and Saturday, their first game will be against Eustis at 7 p.m. on Friday. Belleview (0-1) will travel to Bell (Gilchrist County) on Saturday for a Noon tip-off.