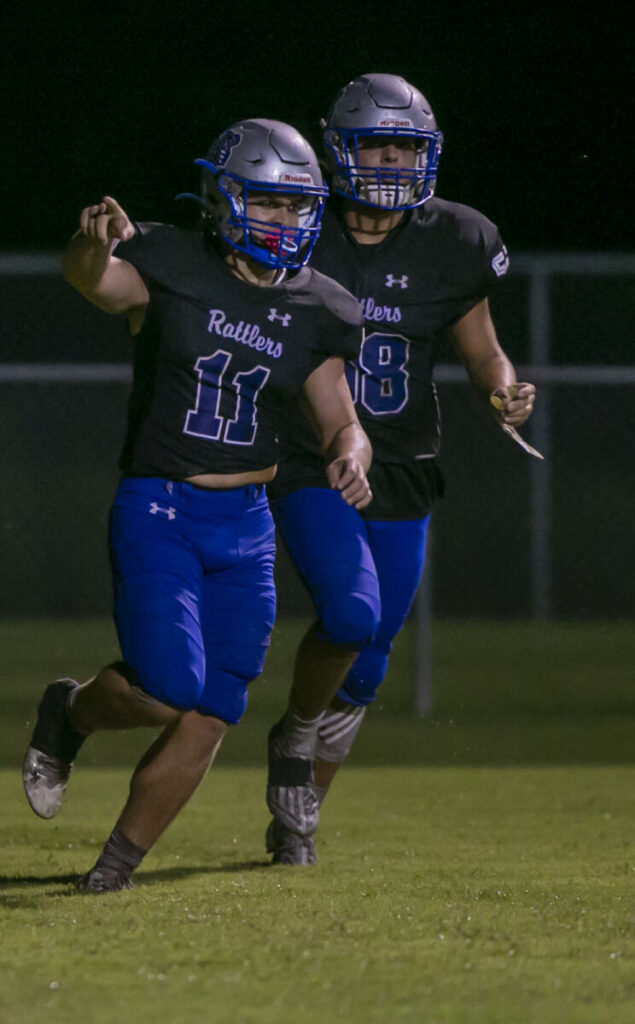 It was a special night at the Strike Zone at Brent Hall Field as the Belleview Rattlers hosted the Tavares Bulldogs, a district foe, on senior night.

The Rattlers struck early and often as senior quarterback/safety Ernest Flythe returned an interception for a touchdown to put Belleview up 7-0. Less then three minutes later, senior running back Eric McLaughlin scored on a 15-yard touchdown run.

After a scoreless second quarter, Belleview came out swinging to start the second half as Flythe found Davonte Welcome for a 30-yard touchdown pass. Freshman quarterback Matt Dial has been the starter in recent weeks but Belleview head coach Brian Lane wanted his seniors to be heavily involved on Friday night. Flythe also contributed on defense with two pass break ups and multiple tackles.

Senior running back Jaheem Shannon had two touchdown runs of 40-plus yards and senior wide receiver Andrew Lanctot caught a 12-yard touchdown pass in the third quarter to put Belleview up 42-0.

Shannon and McLaughlin were a force and looked like the dangerous combo that terrorized defenses during the first month of the season.

“They played well and were able to get some great runs tonight.” Lane said.

The Belleview defense was dominant as they posted their second shutout of the season. Junior linebacker Jacob Dyer also had an interception. Lane said he was pleased with the defense being aggressive by forcing turnovers.

With the win, Belleview moves to 4-5 on the season and a road win at Trenton would give them back-to-back records of .500 and above.

Lane said he so proud of how the defense has performed all year and continued to fight when times seemed bleak for their offense.

A win at Trenton next week still leaves Belleview on the outside looking in when it comes to playoff bids. Regardless of that outcome, Lane is happy with where the program is headed and just to focus on beating Trenton next Friday.